(Long Island, N. Y.) I liked 2000’s Pitch Black, the first of the Vin Diesel-starring sci-fi film series about convicted killer and all-around nasty dude Richard B. Riddick. It was a tense action/horror movie pitting a group of people marooned on an alien planet in the middle of an eclipse and stuck between vicious predator life forms that only come out in the dark and Riddick, a bad guy who can see in the dark and who may or may not be their ally. It was gritty and action-packed, and, more importantly, it was Diesel’s breakout role.

Its sequel, 2004’s The Chronicles of Riddick…not so much. Eschewing the grit and horror elements in favor of cheesy and over-the-top fantasy elements seemingly ripped off from the David Lynch film adaptation of Dune, I can honestly say I’ve never seen it in its entirety; I’ve just caught snippets on cable throughout the years, and I’ve never liked what I’ve seen. The series seemed, much like The Matrix movies, to be an example of a director doing well within financial constraints but blowing it big time when given the chance to do a big-budget follow-up.

Thankfully, writer/director David Twohy and producer/star Diesel, have taken the series back to its roots, either through good sense or just because of the fact that no one was willing to drop another 100 large on a Riddick movie after the last one barely broke even. Regardless, Riddick, despite having a silly title (like when Sly Stallone called Rambo 5 “Rambo”), still manages to bring the goods, redeeming the series and functioning as a great standalone entry at the same time.

Short plot recap- Riddick, who heads up the so-called Necromonger empire after driving a knife up to the hilt into the brain of the previous leader in the last movie, is getting kinda antsy being the big cheese and starts longing to discover his long-lost home world. Making a deal to appoint a new leader in exchange for a ship to search out his planet, Riddick is instead betrayed and barely survives an assassination attempt. Left stranded and wounded on a hostile alien world, it’s just Riddick and his deadly guile, strength, and skill against two crack teams of bounty hunters who are on the hunt for his head… 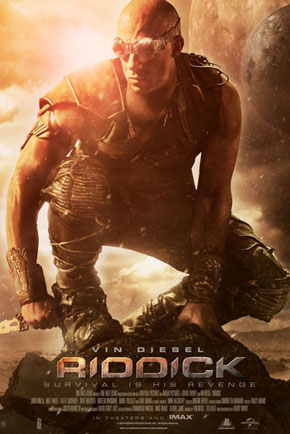 I’m a fan of Vin Diesel. I feel his dramatic talents as an actor are under-utilized and often under-appreciated and he’s got the physical credentials to make for a great action star; I honestly thought he had a great shot at inheriting the crown from the likes of Arnold himself. Some bad film choices over the years have unfortunately caused him to fall short of that goal, but he’s finally found lasting success with his entertaining Fast and Furious series, and, to a lesser degree, Riddick. Anyway, Diesel is in prime form here…Riddick is typically a calm, cool killing machine with a dry wit, which doesn’t really require a great deal of range when it comes to delivery, Diesel still manages to infuse the role with intensity and drive; it’s like he’s missed playing the role, and he knew this movie was a make-or-break opportunity for the franchise. As a result, he really seems to give Riddick his all, and he delivers, bringing back all the fun traits about the character that made Pitch Black so enjoyable 13 years ago. It helps that he’s also in tip-top shape in this installment.

His backing cast is, for the most part, also good. Karl Urban, Judge Dredd himself, reprises his role from The Chronicles of Riddick, and he’s joined by other underrated yet suburb actors such as Bokeem Woodbine, Jordi Molla, Matt Nable, Katee Sackhoff, and even former WWE wrestler Dave Bautista, who seems to be making quite a film career for himself as a cinematic badass. He’s surprisingly not bad it, actually…especially since he’s already a big, scary-looking dude to begin with.

Visually, Riddick is impressive in that it does a lot with a relatively small budget. Yeah, I just called $38 million “relatively small,” but in an era where blockbusters are hitting $200 large and higher, $38 million is considered “small.” But what the filmmakers manage to do with this “paltry” sum more illustrates how $100+ million budgets are apparently squandered than anything else; for a sci-fi movie set on an alien planet and featuring fearsome and large CG monsters, Riddick in no way looks or feels cheap at $38 million, even if it does take place on a smaller scale than its 2004 predecessor.

Featuring a slow burn of a pace that lends it a more thoughtful air as it ramps up its pace as it goes along, great action scenes, and a solid story and effects work, Riddick is a great return to form for both Vin Diesel and the franchise. The ending leaves it open for another installment, and given the relatively cheap production cost, it seems likely that we will be getting another journey into the wacky world of Richard B. Riddick again in the future. Hey, I’m all for it.