(Long Island, N. Y.) Well, here we are with a nice holiday film for the family to enjoy that I just so happened to take my nephew to go see. What I’m trying to say is that Rise of the Guardians isn’t a movie that I myself would choose to see for my own entertainment, but as kid’s fare, it’s pretty solid and should provide ’em with about 90 minutes or so of enjoyment. You? You probably think it’s decent, but if not, bring a fully-charged smartphone or Nintendo 3DS to keep yourself occupied just in case.

Rise of the Guardians, which is based on William Joyce’s The Guardians of Childhood book series and The Man in the Moon short film by Joyce and Reel FX, tells a story about the Guardians (Santa Claus, the Tooth Fairy, the Easter Bunny, and the Sandman), who enlist Jack Frost to stop Pitch from engulfing the world in darkness. It features the voices of Chris Pine (Jack Frost), Alec Baldwin (Santa Claus), Hugh Jackman (The Easter Bunny), Isla Fisher (The Tooth Fairy) and Jude Law (Pitch).

Overall, it’s okay. I found it to be humorous, but Pixar remains the reigning champ of devising jokes that appeal to kids while including slightly more risqué material that will sail right over their heads while their adult companions get a chuckle. Rise of the Guardians is more kid-oriented fare, so while I did get some amusement out of it, this was really a show more geared to my nephew, who did get a kick out of it. 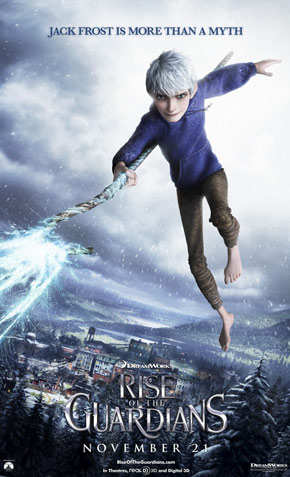 One weakness of the story is that the Guardians are given this long, convoluted, elaborate back story that goes on and on and on, at the expense of the actual story that’s supposed to be driving the film, which comes across as more of an afterthought. I know, I’m whining about the plot structure of a kid’s film, but honestly, any good movie should display solid development in all aspects of its creation. Pixar movies don’t do this. It’s not a

deal breaker, and it doesn’t ruin the experience, but it is annoying that so much effort is spent establishing the hierarchy and history of the Guardians for such a bland and simple tale once the film finally gets going.

While the story was decent but sorely lacking in development, jokes solid, and the action fun, one area I really think that Rise of the Guardians kinda flopped in was character design; everyone has this sharp, blocky thing going on, aside for Jack Frost, who

has this slightly effeminate, emo Japanese Anime look, and I found it all rather unappealing. And everyone had these big, black, bushy Grocho Marx eyebrows, and each character seemed to have been designed by a completely different artist, giving us a cast that oddly lacked visual cohesion…I don’t know what was up with that.

So, overall, Rise of the Guardians is an okay children’s flick that won’t torture adults roped into coming along, but it won’t universally entertain like some of the better examples of the genre manage to. The story is fun but shallow, but there’s

enough action and humor to keep the kids glued to their seats while you try and level up to 37 in Cthulhu Saves The World on your cell phone before your battery gives out. While this isn’t a video-game review column, I highly recommend that one to keep yourself occupied while accompanying your kids to decidedly average kiddie-oriented cinematic fare.