(Long Island, N. Y.) Man, some series just have to run themselves into the ground before they realize their time is up…and yeah, Scary Movie is such a series. David Zucker has quite a pedigree. Heck, this is the man that created possibly

the greatest spoof film in history- 1980’s “Airplane!” I just watched it the other day on cable and it STILL holds up, over thirty years later.

Unfortunately, however, Zucker can only ride by on his rep for only just so long, as the fifth installment of Scary Movie (a parody of horror flicks that Zucker took over from Keenan-Ivory Wayans starting with the second installment) is just an example of beating a horse to death, and then just embarrassingly trying to ride the corpse. Apparently just throwing out random pop culture references disguised as “jokes” isn’t really getting audiences laughing like they used to. I, for one, am overjoyed about that.

Scary Movie 5 attempts to poke fun at several recent notable entries into the horror/sci-fi genre, including “Paranormal Activity,” Black Swan,” “The Cabin in the Woods,” “Evil Dead,” “Inception,” “Insidious,” and many other movies of varying quality and worth that are all nonetheless still better than Scary Movie 5. Plus, it stars “actors” such as Lindsey Lohan and Charlie Sheen (playing themselves, of course, and playing up their real-life public blunders and gaffes)… thankfully, Anna Faris and Regina Hall, the previous stars of this series, had the good sense to sit this one out. We do get Snoop Dogg and Mac Miller in this one, though,

so all is not lost, I guess. 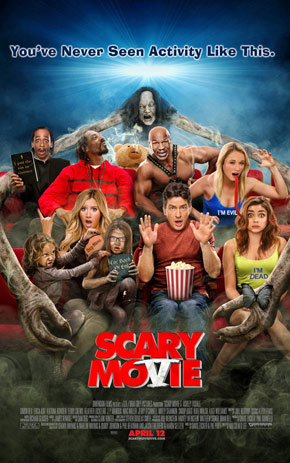 And that’s another problem when your film relies almost completely

on popular culture- you need to be bleeding-edge with your lame references to current trends and gossip, because in 2-3 months (taking into account the average attention span), your feature will be hopelessly dated and out of touch. I remember Scary Movie 2 referencing (I think) a Nike basketball commercial in a gag that not only would go over the heads of most of today’s audience, but actually make no sense whatsoever to boot. Needless to say, these movies don’t stand up to repeat viewings.

However, there IS a bright spot to this whole Scary Movie situation- most likely, this will be the very last we see of it. Bombing

at the box office this past weekend (and currently sitting with a dismal five percent rating on Rotten Tomatoes, which I’m sure will go down even further once this review is taken into account, of course), it seems that Scary Movie will be going away for good. If there is one thing that Hollywood studios are predictable about (actually, what AREN’T they predictable about?), it’s money; if you’re not making it for them right here and now, they’re not going to invest a dime in you, no matter how

awesome your past record is as a filmmaker. Hollywood execs have very poor memories, you see.

David Zucker- I humbly thank you for Airplane! Now please stop. Thanks.