(Long Island, N.Y.) In tough economic times, many companies focus on getting new customers. Dean Del Prete who, along with Paul Sattler owns the Deer Park-headquartered Cousins Paintball, has a different philosophy. Cousins appreciates new customers and does put marketing efforts into growing the proverbial pie (the number of people who play paintball nationwide, which now numbers in the 6 millions). But Del Prete focuses a lot of the company’s social media marketing and promotional programs on building customer loyalty. “It costs pennies to keep a customer, rather than the costs to recruit new customers. Social networking is one thing that helps us do that.”

“We look at Facebook as ‘insider-ish,’” Del Prete explains. “It’s a chance to show our internal goofiness. Because of the business we’re in, we can get away with being a lot edgier than many companies.” Cousins’ Facebook fans will find long-time employees like Steve Cusano, Dave Rotunda and graphic designer Chris Vitale on Facebook hosting fun contests and talking about everything from testing out the latest cool products to upcoming games. 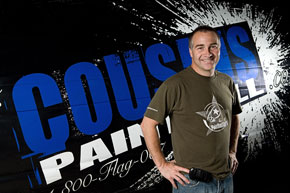 Del Prete notes that this social marketing plan — using Facebook and Twitter to build relationships with existing customers — may not be what social media marketing experts might recommend, or what everyone else is doing, but it’s working for Cousins. “Social media is a net, and we’re not casting it wide. But we’re catching the vast majority of the customers we’re aiming to catch.” The target audience? The diehard players, the insiders, and players who want to feel like insiders.

But Facebook is most useful, Del Prete says, “to maintain an ongoing conversation with our loyal customers, to give them an insider’s look at our company, and to make them feel appreciated.” He adds, “Our approach to social media is always evolving, but it’s all about understanding the customer — and our most loyal customers are on the Internet, so it’s been very successful for us.”

Recently, one very active thread introduced the commanding generals for the upcoming Long Island Big Game, to be held this May 15 and 16 at Cousins Paintball in Coram. Speaking of customer loyalty, the red team general will be local paintball legend Rob Navas — Cousins Paintball’s first customer three decades ago. He’ll face off against former pro paintball player and industry insider Chris LaSoya.

In addition, G4 network’s Attack of the Show will be covering the game, with special guest and Playboy Playmate Sara Underwood. Approximately 2,000 players are expected this year, as well as two tanks and a real helicopter.

The bulk of paintball’s 6 million players are weekend warriors, people who come to Cousins to play for birthday parties, bachelor parties and special outings. But anyone who comes to Big Game is sure to have a blast — you don’t have to know the players or own special gear to enjoy a target-rich environment of 2,000 players. And you don’t have to care that you’ll be participating in one of paintball’s longest continuous running organized events. (Although that is pretty cool!)

In terms of new customers, Del Prete tailors some of his AdWord campaigns — which are all local — to unique keywords not necessarily related to paintball. “We’ll place ads for the keyword ‘class trips,’ because we have groups who call us up thinking about paintball as a senior trip.”

This innovative approach goes back to Del Prete’s “net” analogy; AdWords casts the net wide to bring in new customers. It still comes down to knowing your customer and knowing what your customers want. In the case of a paintball field and store, the ads are tailored to people looking for a unique and exciting weekend activity. Any business owner can apply this strategy by thinking about what need his business fills, and what search terms people would use if they were looking to fill that need.

“What are we selling, really?” Del Prete asks, and then answers the question: “We’re selling fun.”