(Long Island, N. Y.) Every now and again a little film comes along that catches me by surprise. Seven Psychopaths is such a film. It’s been out in limited release for several weeks, and if you look around, you can still find it playing in select locations. It’s a pretty crazy crime/comedy film

with an ensemble cast that includes Colin Farrell, Sam Rockwell, Woody Harrelson, Tom Waits, and Christopher Walken. The plot, which probably sounds rather nuts on paper, is, in reality, just that: nuts. However, it makes for a hell of an entertaining film. It’s all in the execution, kids.

on Farrell’s character, unusually playing the straight man to a pack of insane characters

for once, instead of the other way around. Farrell even seems to be using his native Irish accent for once, which is yet another nice departure for him as an actor. Farrell plays Marty, a struggling and alcoholic scriptwriter who combats a severe case of writer’s block by trying to draw upon the deeds of seven real-life psychos and murderers in order to finish his screenplay, dubbed (you guessed it) “Seven Psychopaths.” His friends include Billy (Rockwell), a professional dog thief who sends his partner Hans (Walken) to collect the rewards offered for the pooches he makes off with.

Things get bad when Billy and Hans steal a dog belonging to violent gangster named Charlie (Harrelson), who has an especially strong fondness for his lost poochie. Things ramp up from there, with

Charlie tearing a path of destruction while trying to find out who took his dog while Marty, when not drinking too much or ignoring his screenplay, is sucked into Billy and Hans’ dilemma, and soon all three are on the run with Charlie’s dog, who honestly is a really cute little fella…I can see why Charlie wants him back so much.

the seven psychopaths referenced by the film’s title all running around, doing various and sundry antisocial activities…all of which figure into the plot in varying ways. Let’s not forget that, or the fact that they all eventually start figuring into Marty’s slowly-evolving screenplay. That is,

if he lives to finish it! 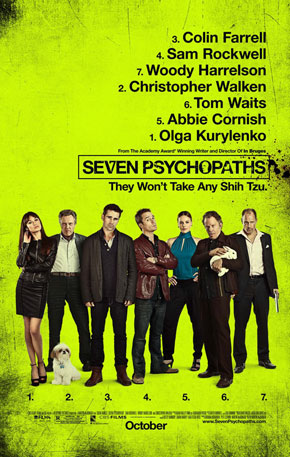 Seven Psychopaths is an insane montage of activity, people, and out-and-out lunacy that is nonetheless masterly woven into a coherent mess that will, by the end credits, amazingly make total sense. Characters and situations are introduced that seem to serve no purpose, but will ultimately all weave together and complete the film as a whole. It’s not without its warts, but overall, Seven Psychopaths is an example of some pretty slick film-making.

And it helps that it’s pretty much hilarious. There’s one scene late in the movie where Sam Rockwell’s character (who is awesome and basically steals the film) is fantasizing out loud about the assumed “final shootout” with Charlie and his goons that is played out in his head for the audience to see, and…well, I won’t spoil anything, but I was almost crying I was laughing so hard. Just pure insanity.

Meanwhile, Walken plays his character with a bizarre and calm strangeness that almost borders on a parody of his normal film persona, and

like I said earlier Farrell dials it back and as a result, is actually semi-likable for once. Harrelson, meanwhile, impressively tiptoes between amusing and scary with ease, making for a memorable villain.

Slick, stylish, chaotic, unpredictable, oddly touching and unrelentingly brutal when it isn’t side-splittingly funny, Seven Psychopaths is a great and somewhat overlooked film that you should track down and check out ASAP. You won’t regret it.