(Long Island, N.Y.) You know, I kind of enjoyed the first Guy Ritchie-directed Sherlock Holmes film back in 2009, even though it bore little resemblance to the stories crafted by Sir Arthur Conan Doyle. The tale of Holmes (Robert Downey, Jr.), the amazing Victorian-era super-sleuth and his trusty sidekick Dr. Watson (Jude Law) was given a modern facelift, with fun (albeit uneven) results. Now less of a complex whodunit and more of an action movie, the concept nonetheless managed to stay afloat based on Downey and Law’s chemistry, a solid story with a serviceable villain, and a great soundtrack.

The downsides of the new formula were wafer-thin character development, and the complete departure from just about everything that made Sherlock Holmes…well, Sherlock Holmes. This modern UFC fighter-style Holmes who possesses the ability to tactically plot out how he dismantles his opponents beforehand, only to make good once the fisticuffs commence is…well, odd. It makes you wonder why they even used the name “Sherlock Holmes” instead of “John Smith” or something. Oh, yeah, to cash in on the name recognition. That’s it.

Anyway, when a sequel was announced, I was interested…mainly because throughout the first movie, Holmes’ brilliant arch-nemesis, Professor Moriarty (Jared Harris) was seen skulking about in the shadows here and there, which was obviously done to set up his full-on introduction in this film, entitled Sherlock Holmes: A Game of Shadows, a film that depicts his conflicts with Holmes as Moriarty attempts to start a global conflict to fuel his munitions business.

There’s also a side-plot where Holmes is distressed that Watson is getting married and no longer wants to deal with Holmes and his insanity, but of course, circumstances arise that cause them to team up one last time…until the inevitable Sherlock Holmes 3, that is. 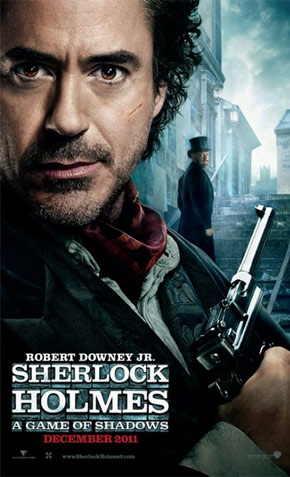 Unfortunately, in this installment, Guy Ritchie and company decided to up everything I didn’t like about the original, and cut back on everything I did, and the resulting film is even LESS like a true Sherlock Holmes adventure…if that was even possible.

All but gone are the problem solving, the amazing deductions, and the overall gumshoe brilliance. It’s been completely replaced by MMA fights, machine guns, giant cannons, and non-stop explosions, none of which existed in the Victorian era (well, except for explosions), or Doyle’s novels (although I haven’t read them all…I suppose something might have blown up here or there, but certainly not to THIS outlandish degree). Add in all manner of sight gags and characters you barely know (or are given any reason to care about), and you have a film that fails on almost every level where the original succeeded.

And Ritchie’s take on Moriarty also heads in the same overblown direction, transforming a character who was the very epitome of intelligence, elegance, and (of course) evil into somewhat of a brutish bore trying to hatch a plot worthy of a James Bond villain. Harris’ Moriarty is almost redeemed in a pretty cool scene near the end where he engages in a chess game with Holmes that starts on a board but soon turns completely mental, but overall, the interactions between the two were rather disappointing, in my opinion. They WERE the highlight of the film, however, which speaks more about how forgettable everyone else was than anything else.

Downey’s Holmes remains as motor-mouthed, unhinged and twitchy as ever…as usual, he’s just playing himself here, although at least he’s doing so with a serviceable British accent. However, his new penchant for silly costumes and disguises, while amusing at times, ended up being fairly goofy more often than not, reducing Holmes to nothing more than a cartoon character. Law’s Watson, for me anyway, seemed to be the more interesting and believable then his partner, as was Stephen Fry, who played Holmes’ brother Mycroft (although they could have left out his nude scene. Ugh).

I’ve painted a pretty negative picture of Sherlock Holmes: A Game of Shadows, and I’m not sure it’s completely warranted…as it is, it’s not that great, but there is a good level of entertainment and fun to be found, despite the departures from the works of Sir Arthur Conan Doyle and even the original 2009 film. It’s just that those departures are so extreme in both cases that, like so many modern movies these days, A Game of Shadows becomes a textbook exercise in flash over substance. The first movie managed to finely walk that line… A Game of Shadows trips over it and falls flat on its face.