through the cursed town after which the series is named, relying on psychological terror, disturbing creatures that are created by the characters’ twisted psyches, and fear of the unknown; the only illumination in many of the environments is supplied solely by the flashlight of the protagonist.

The story-lines tend to be highly emotional and cryptic, evoking a dream-like state that quickly delves into a nightmare, with the surrounding landscape twisting and morphing into a vision of hell adorned with metal, rust, blood, and rotting flesh as the characters struggle to solve mysteries, fight monsters, and ultimately

Sounds pretty freaky, huh? But what’s REALLY scary are when people try and make films out of this stuff.

In 2006, French director Christophe Gans helmed a movie adaptation of the game series, and while I thought the film totally nailed it in some ways (the visuals, mostly, and some of the atmosphere), I thought it was incredibly stupid in most others (the story, characters, dialogue, ending, etc). Monsters and situations from the games that were specifically tailored to certain characters’ fears and pain were turned into generic boogeymen, and the motivations of the female lead were among the dumbest in history; a game series that stood out from the norm for being truly disturbing and different was turned into a standard spook fest. It wasn’t horrible- when it was on, it was ON, but when it wasn’t…ugh.

Still, the film did well at the box office, and soon talk of a sequel was brandied about. However, it took quite some time for anything to materialize…six years, to be exact. But the sequel’s finally here, in the form of Silent Hill: Revelation 3D, directed and written by Michael J. Bassett. Is it a better film and, more importantly, a better adaptation of the video-game series? 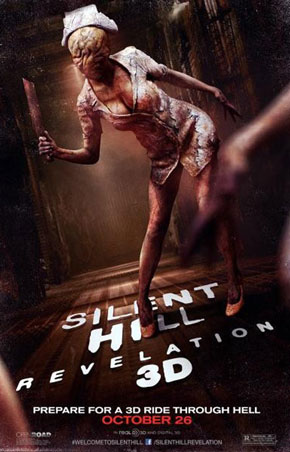 A translation of the Silent Hill 3 game, Silent Hill: Revelation 3D is a direct sequel to the first film. Sharon (Adelaide Clemens), the teenage daughter of Rose Da Silva (Radha Mitchell) and her husband Christopher (Sean Bean), has been living a normal life after escaping the evil cult of Silent Hill in the first movie. However, she eventually finds herself experiencing nightmares of the ghastly town, and soon she is drawn back there to confront the evil of Silent Hill, once and for all. However, the cult of Silent Hill have plans for Sharon as well, horrible plans involving the re-birth of their pagan

god who will subsequently purge the world of life in favor of a horrific and bloody new utopia. But can some bratty teen kid really prevent a literal hell on Earth?

Silent Hill: Revelation 3D is a boring film devoid of scares, good dialogue, solid acting, and a well-structured story. Adelaide Clemens is the main offender here; a Canadian actress playing an American, she flip-flops back and forth to her native accent so much that it soon grows infuriating. She also displays the

acting range of a cup of weak coffee, so when I read that the producer’s main requirement for the role was the actor possessing a page on the Internet Movie Database, well, it came as no surprise.

Like the first movie, the creature effects and environments are mostly done with practical effects, but needlessly “enhanced” with CG that take away from the work of the make-up artists. However, the bleak and lonely atmosphere, well-established in the original nothing vie, is largely abandoned, robbing Silent Hill: Revelation 3D of any true scares; with the addition of a slow and plodding pace, the film is rendered into a bland exercise into boredom instead of a journey into terror.

all but non-existent. Again, it’s just an attempt to jack up your ticket price while adding nothing to the movie going experience. To date the only films that make effective use of 3D are Avatar and Dredd. All others…steer clear and save your money.

I’d say that I’m hoping that someone finally gets it right if they make yet another Silent Hill movie, because the source material could easily make for one of the best horror films ever made. But given the abysmal response to this one, coupled with it’s pathetic take at the Box Office this past weekend, it’s safe to say that movie audiences have finally done what the protagonists of the game series have failed to do- banish the evil of Silent Hill once and for all.