(Patchogue, NY) Singer, songwriter Amber Ferrari dazzled the audience and lit up the stage like a cosmic star performing her special rendition of Madonna’s Material Girl at the newly renovated Patchogue Theatre this past Saturday, April 30, 2016.

Long Island native Amber Ferrari is a recording artist, musician and actress who takes the stage by storm and her performances astound even the most energized entertainer. Amber electrifies the crowd and dance floors wherever she performs! Ferrari packs an exhilarating and emotional punch into every live performance with covers of Melissa Etheridge, Heart, Janis Joplin and more, as well as her own phenomenal original songs. Her many fans delight knowing that no two shows are ever the same!

Renowned for her distinguished Show “Joplin’s Pearl”, Amber continues to electrify the stage. During the first half of her show she performs the music of some of her favorite artists like Melissa Etheridge, Heart, Pat Benatar, Jefferson Airplane and others (as well as her original music)! The second half of her show is dedicated to the greatest rocker of them all, the legendary Janis Joplin. When she steps out on stage dressed as Janis herself and begins to sing you will feel as if you stepped back in time. With complete command of their styles and with authenticity of the music, even the original artists would find Amber Ferrari and her powerful band a “must-see!”

Amber Ferrari’s new show “Material Girl” which premiered this past Saturday, April 30th, was Exhilarating! During the 1st half of the show, by popular demand, Amber performed some of her favorites, as well as her original music. The second part of the show brought audiences back to the 80’s with the Icon Madonna and the hits that got ya’ dancin’ like “Vogue” and “Holiday.”

Before her performance I sat down backstage with Amber Ferrari as she conveyed her excitement about the show and the release of her new CD “Where Your Wishes Fly.”

Cognac: Welcome back darlings, I am Cognac Wellerlane and I am here with Amber Ferrari and she is going to be in concert with the Material Girl and today is releasing a fabulous new CD. Amazing how exciting for you to be opening up right here at the Patchogue Theatre.

Amber: Well it is actually the second half of the show that is dedicated to Madonna and growing up I used to listen to Madonna all the time in the 80’s… I love her music so I thought it would be a really be a really fun show to put together, and I did and we are doing it at the Patchogue Theatre, and I am very excited!

We are sitting here amongst all these fabulous costumes. How many costumes changes are you going to be doing this evening?

Amber: In set we are going to do a mixture of Journey, Pat Benatar, Heart, Adele, The Who, Aerosmith, The Eurythmics and a few of my originals from the new CD that was released today. I have five costumes and for the Madonna set I believe I have a total of seven costumes. 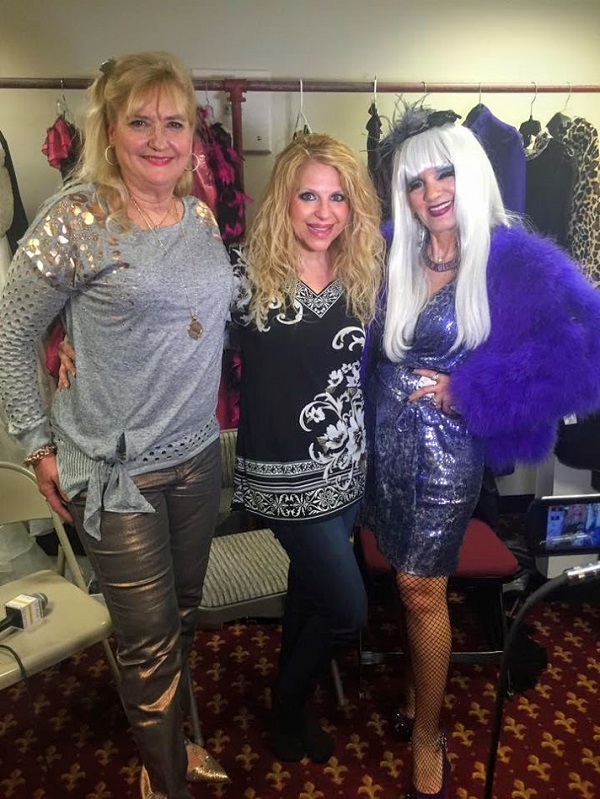 Seven costumes, oh my God. Can you tell us a little bit about the costumes.

Amber: Well for the first half of the show the costumes… I basically selected something that I envisioned that fits the style of music that I am performing. Some of them I had made from a design that I had in my head. Others I found in stores and altered them to my liking. For the Madonna set I had a few things made that matched her, especially The Material Girl Gown that she wore in the video from Material Girl.

Oh my God that is amazing. Now tell my audience what inspired you to be an entertainer, a performance artist?

Amber: My parents told me I was singing before I could talk and I have always loved music. I also played violin through school and high school. I just love music so I think it was something I was born with and it is in my blood. My father is a drummer and my father is performing with me tonight. My mom use to play the clarinet and sang. She did all the school musicals. It is in my blood.

What was it about Janis Joplin that you wanted to emulate?

Amber: Well Janice… do a Janis show came up… I was asked to be in a show called “Woodstock Mania,” Woodstock Theater in Theater 3 years back. I believe it was in 2006, 2005 even and I didn’t think I could sing Janis Joplin’s music–not a rock and roll voice–I didn’t think I was. I was trained classically as a teenager for a year and a half and I was assured by the musical director of Theater 3 who was also a vocal coach of mine she thought I could do it. So I said “Alright if I can do it I will do it but if I sound terrible I want you to pull me from the show,” and I did it and I ended up getting two show stopping standing ovations after “Piece of My Heart,” and I said I have to do something with this. The show “Joplin’s Pearl” was born from that. My next “Joplin’s Pearl” will be here at the Patchogue Theatre on October 8th.

Yes, I heard how exciting and now you are doing Madonna, the Material Girl.

Did you ever… of course you could never meet Janis Joplin unfortunately she passed away so many years ago but did you ever meet Madonna personally?

Amber: No I haven’t. I have seen her in concert.

But you have never met her.

Amber: No, never met her.

Wow, well we have to make that happen, don’t we.

You know you look a little bit like her. Do people tell you that?

Amber: No actually they haven’t but that is a huge honor because she is a beautiful woman so thank you.

She certainly is. She is very beautiful and how exciting about this particular CD. Tell my audience about this CD what are we going to be hearing. 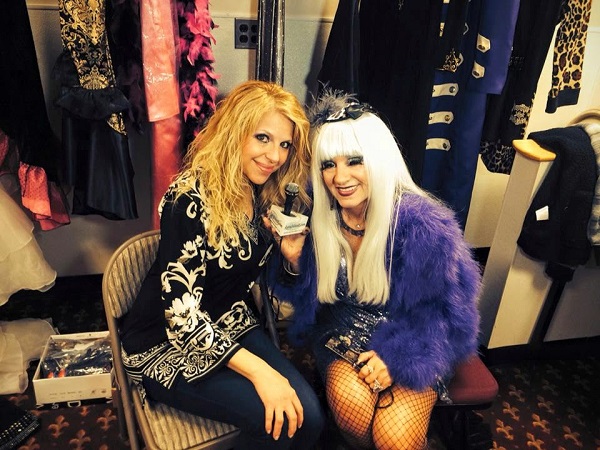 Amber: The CD is entitled “Where Your Wishes Fly,” which is the second track on the CD, it is a ballad. It’s a song–I wrote everything with my husband who is my guitarist, Chris Ferrari–it’s a song about people just getting through everyday life and you know sometimes wanting to leave their 9 to 5 jobs and just dreaming. It’s about people living in other people’s dreams and being where other people’s wishes fly. The lead off track on the CD is called “My Name is (Karma)” and it talks about karma. If you give good karma you get back good karma. If you give bad karma then bad karma is coming back.

Amber: Absolutely that is what that song is about. The third song on the track is called “Dreamin’,” that’s great. It’s a rock-dance tune. “Karma” is a heavy rock song. After that there is a song entitled “Long Way” that’s mid tempo rock tune followed by “Can’t Explain” which is a punk rock song and then we put a bonus track on there which is a single that we released last year… gee… it’s like, I don’t know how to describe it–Latin dance rock tune. It’s called “Plastic Passes.”

Well I can’t wait to listen to this music. I want you to tell my audience now that I am talking to you at the Patchogue Theatre… you must have a favorite tune… you must have something favorite that you have sung… some Madonna classic that you really love the most?

Amber: I would have to say my favorite is “Vogue.”

Really, what is it about “Vogue?”

Amber: It is really 1990 but I get away with it because it is so close. I don’t know I just like everything about it. There are so many different parts to it.

We are going to hear that tonight?

Where can we go to find out more information about your sexy self?

I also had a chance to chat with Comedian Ike Avellli who opened the concert and introduced Amber. 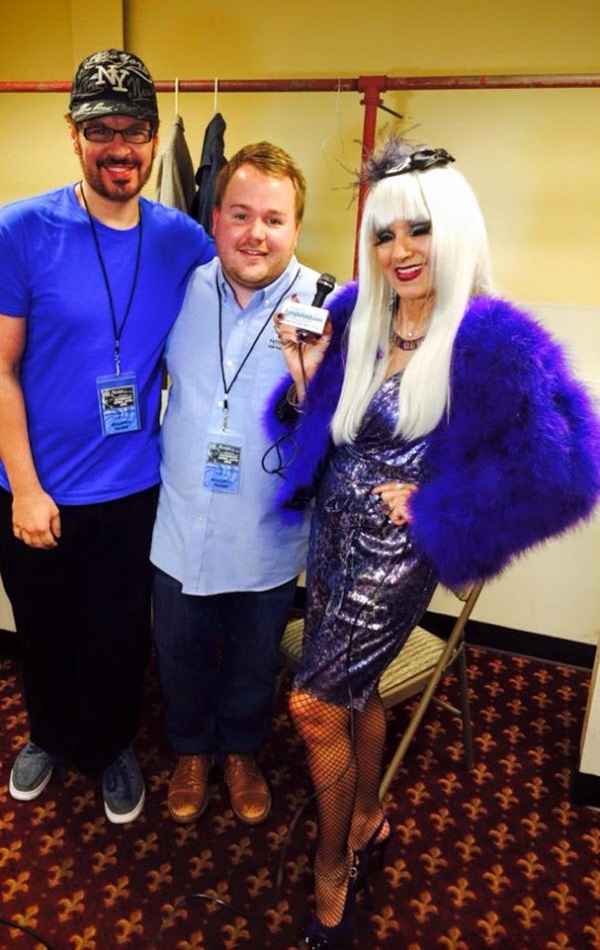 Ike Avelli began his career in 2009 as a last minute fill-in at a Christmas Party doing Stand Up comedy. The sound of laughter sealed the deal, and he would continue to write and perform his own material.
To find out more info please visit his website at IkeAvelli.net.