(Long Island, N. Y.) 2001’s hit, Insidious, was considered by many as a creepy renaissance of sorts; after years of boring, bland, cookie-cutter horror films, the director/writer team of James Wan and Leigh Whannell crafted a terrifying tale that had audiences screaming and peeking at the screen through their intertwined fingers. Not a bad accomplishment, eh?

Of course, groundbreaking movies breed copycats, and today I’m reviewing one in the form of Sinister- yeah, even the name is basically a rip-off. Surprisingly, it’s a pretty decent rip-off, but not without its warts. Let’s delve into what’s sure to be an upcoming wave of carbon copy horror flicks that rely on creepy sudden reveals, bleak atmosphere, and scary yet slightly goofy antagonists.

Sinister opens with footage of an old home movie where a mysterious figure hangs a family of four from a tree. There’s a fifth family member who turned up missing after the murders, but don’t worry…I’m sure they’ll turn up sooner or later. But the good news is, now that they’re dead, the family’s home goes on the market at a real bargain price, and is eventually purchased by writer Ellison Oswalt (Ethan Hawke), who moves into it with his wife, Tracy (Juliet Rylance), and their two children Ashley (Clare Foley) and Trevor (Michael Hall D’Addario). 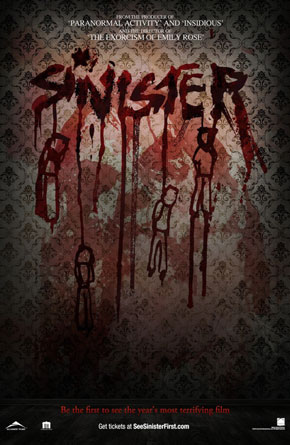 Ellison, who bases a new book on the murders, finds a box of film footage in the house’s attic one night, and upon watching it, discovers that they’re actually a series of snuff movies depicting various families being killed, including the family from the opening of the movie. To make things worse, Ellison notices a demonic something-or-other in the footage, which really freaks him out.

After watching the films, Ellison notices all sorts of spooky shenanigans going on around the homestead, and soon discovers that the demon thingy he caught a glimpse of is actually real, and may have been set loose when he was reviewing the footage of the families being murdered. Does this mean a terrible chain of events has been set in motion that will claim the lives of Ellison’s family as well?

Sinister is a solid little horror flick that takes great pains to pattern itself Insidious, although it misses the mark and more often than not. The performances are all good across the board, and it effectively uses the “kids in peril” plot device that’s been done to death in every other movie of its ilk. There’s just something…off about Sinister. It’s hard to put my thumb on it…it’s the mysterious little “X-Factor” that separates a decent movie from a good or even great one. Insidious had it. Sinister…not so much, but it’s still worth your time if you’re looking for a few scares.

But what Sinister does right, it does well. The demon behind the murders, named “Bughuul,” is actually a pretty unsettling dude, silly name aside. There’s also a really nice twist about the murders which I found fairly unsettling. In many ways, Sinister is certainly better than a lot of the junk masquerading as horror films these days, although some of its more lazy and cliché attempts at establishing scares certainly drags it down a bit.

Still, if you’re a horror fan, you could certainly do worse than to take in a viewing of Sinister. Check it out if you’re fiending for a scare or two in time for Halloween later this month.