) I’m a massive James Bond fan…always have been. Whether he was played on the silver screen by Sean Connery, Roger Moore, or even George Lazenby (but not so much Timothy Dalton…sorry, Tim), I’ve always enjoyed the cinematic tales of author Ian Flemming’s British MI6 agent with a penchant for tuxedos, ladies, exotic gadgets, and vodka martinis as he battles the evils of the world with suave and style.

However, the awful Pierce Brosnan era almost killed Bond for me. It was marked by forced adherence to every single tired Bond cliché ever…every film had to shovel in the stupid puns, the progressively sillier and sillier gadgets, the instant sexual conquests, the over-the-top video-game stunts, the maniac-of-the-week determined to rule the world, the lame catchphrases…it felt like the filmmakers had an endless checklist they were compelled to mindlessly follow.

And among it all, Brosnan’s Bond himself never felt like an actual human being- just a cold collection of established traits and mannerisms. He wasn’t a character that ever grew or changed, and while the same could be said of pretty much all of the previous actors who had taken

on the iconic role, at least they made up for it in charisma; in the case of Brosnan, both Bond and the overly “extreme” situations he was constantly thrust into had just become boring, cheesy, and impossible to take seriously.

But Bond, as played by actor Daniel Craig, IS a genuine character who expands, changes, and possesses emotional depth; as a result, he’s a million times more engaging, and possibly the best Bond to date. Considering his competition, that’s certainly saying something. 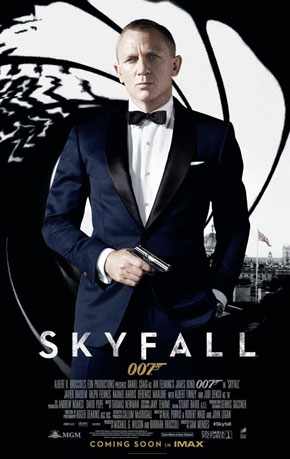 Craig’s first outing as Bond, in 2006’s Casino Royale, was an unbridled success, effectively rebooting the

series and ushering in a grittier, more realistic take on the mythos. However, 2008’s follow-up, Quantum of Solace, was considered by many a bit of a misstep for the newly-revived franchise, and financial problems at parent studio MGM prevented work from proceeding on the sequel for several years. But, it’s now 2012 – the 50th anniversary of the first Bond film, Dr. No – and Skyfall is finally here, and believe me…it was well worth the wait, kids. Bond is back, and he’s better than ever.

Dumping bad CG in favor of practical stunts and effects and delving more into Bond’s history and psyche than ever before, Skyfall, directed by Sam Mendes, is a complex tale that acknowledges the rich past of the previous 22 films in the series while at the same time making a bold statement that this is a NEW Bond…a fresh Bond, stripped down to the basics, that will take the franchise boldly into the future.

Skyfall matches Bond against bad guy Raoul Silva (played by the amazing Javier Bardem) a dangerous former agent gone rouge and who has sworn revenge against the head of MI6, M (Judi Dench). It’s a surprisingly personal tale, foregoing a radical global threat in favor of an intimate and deadly game of chess not only between Bond and his foe, but his personal demons as well. It’s a long, emotional, and deep trek through Bond’s recovery from past injuries, both physical and mental, while nonetheless maintaining the trappings that make him what he is. The core basics of the character are there, to be sure, but they never come across as forced or needlessly shoehorned into the plot; indeed, the script is expertly crafted in a way that they organically drive the plot.

Daniel Craig, with his chiseled features, icy blue stare, rugged physicality, and wide array of emotions, is easily the best Bond ever. He embodies the best aspects of the character while giving him a soul and a human personality at the same time. Javier Bardem serves as one of the most memorable Bond villains in ages, and Judi Dench gives an inspired performance as the plucky M in perhaps her biggest role in the series to date.

The plot itself is beautifully woven, and while the film is long, it never feels that way. The ending is

both draining and, at the same time, sets up an extremely intriguing future for the series, and I for one can’t wait to see where it goes. Skyfall is fun, exciting, and engaging; it’s one of the very best of the Bond film series, and a fantastic way to celebrate its 50th anniversary. Here’s to the next 50 years!