World Wrestling Entertainment superstar left the mat several years ago to concentrate on his budding Hollywood career and was seemingly poised to inherit the Action Hero crown from none other than Arnold Schwarzenegger himself. He seemed the perfect heir apparent: he had the looks, the muscles, the charisma, and the athleticism. Unfortunately, what he seemed to lack was an agent who would teach him to say “no” to obviously terrible scripts, as “The Rock” started starring in some of the worst films imaginable.

After a slew of pathetic family-friendly Disney flicks, Johnson seemed destined for Direct to DVDsville until he finally seemed to wake up and realize his true potential was not starring as a Tooth Fairy, but in kicking butt and saying naughty words. Johnson finally started back on the road to edgier, more adult-oriented fare, and his career appears to be on the upswing once again because of it. His recent addition to the popular Fast and the Furious and G.I. Joe franchises have only served to cement his status as a rising action star once again, and his newest effort, Snitch, continues that trend.

Snitch is a crime movie starring Johnson as construction

company owner John Matthews, whose son Jason (Rafi Gavron) is arrested on drug distribution charges; in reality, Jason was set up in a sting operation by a friend looking to reduce his own prison time after a conviction. With his son facing a ten-year sentence, Matthews cuts

a deal with District Attorney Joanne Keeghan (Susan Sarandon) to work with Agent Cooper (Barry Pepper) to infiltrate the cartel of a high-ranking drug lord Juan Carlos “El Topo” Pintera (Benjamin Bratt) as an informant. If Matthews” intel leads to an arrest, John goes free, but not without putting not only his life at risk, but the lives of his family and friends as well. Sounds easy, right? 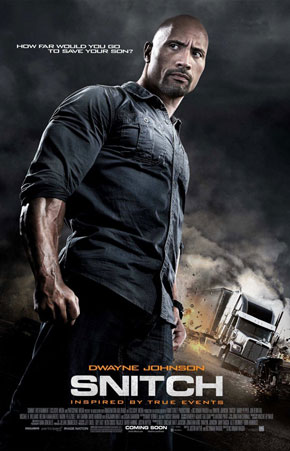 Wrong. casino online Damn, this son of yours better be worth all this trouble, dude.

Snitch is a well-done action/crime flick that really showcases the talents of its star. Dwayne Johnson is one of the more accomplished Action stars

in recent memory as far as his acting abilities go, and it”s good to see him finally choosing roles that aren”t total career suicide. For example, Snitch, while obviously specifically developed around Johnson, would probably still be a solid film even with another actor in the lead. This is due to an effective supporting cast (Sarandon and Pepper are very good, but Bratt almost steals the show), some tight, fast-paced direction, and a storyline that manages to generate a fair share of tension. Adding Johnson to the mix, especially considering that he”s brought his A-game here, only makes Snitch all the better.

Snitch can be a little heavy-handed in its message (the film ends quoting statistics about how first-time drug offenders get more time than rapists or murderers), but otherwise it”s a gripping and exciting drama with some great action scenes sprinkled in. Johnson has previously displayed his knack for comedy in the past, but Snitch really brings his dramatic skills to the forefront, giving him one of the better films of his career thus far. I really hope he

continues with adult-oriented work and leaves the kiddie stuff behind, as he”s coming much closer to fulfilling his potential as a movie star going this route.

Snitch is a good movie. Check it out.