(Long Island, N.Y.) Hey…on the lookout for a movie without any story whatsoever? Then you’ve found it! Well, okay…I’m exaggerating a tad. Snow White and the Huntsman DOES have a story. Well, barely. After all, it’s based on the beloved children’s fable compiled by the Brothers Grimm, but only in the basest sense.

Honestly, the damn fairy tale had a deeper, more nuanced storyline than this heap of garbage. Granted, it didn’t have the film’s millions and millions of dollars of ridiculous computer graphics, but it was a book; all the good stuff happens in your head when you read one of those, and it’s usually better than what some marketing clown at a major Hollywood studio comes up with.

It’s funny…considering that Snow White and the Huntsman starring mopey Twilight gal Kristen Stewart, Charlize Theron, and Thor himself, Chris Hemsworth, has no real story, I was considering just leaving a great big, blank area of my review dedicated to describing the plot. You know, to get across the idea that…well, this movie has no story. But, since that course of action probably won’t get me paid, I’ll forgo that idea and just tell you what the movie’s all about, okay?

Here goes: Snow White’s (Stewart) father marries Ravenna (Theron) who then kills him and seals Snow White up in a tower because she’s “fairer” then she is (whatever that means). Snow White escapes and Ravenna sends Thor (Hemsworth) after her because she holds the key to ending her power over the land. Oh, yeah, Ravenna uses magic to stay young and beautiful. 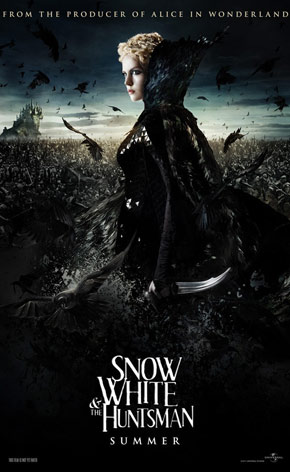 Um…that’s pretty much it. And that was the LONG version of the plot. I think I covered pretty much everything. And what that translates into when taken as a cinematic experience are short, pretty, computer-assisted action scenes separated by long, boring stretches where nothing matters because there’s no story, no character development, no nothing going on. This honestly might be the most vapid film I’ve ever seen.

Oh, and apparently little people are up in arms because the movie uses a weird special effect where they digitally graft well-known actor’s faces onto the bodies of dwarves for these characters who are supposed to be gnomes or something. Honestly, the effect is seamless and somewhat amazing, yet I found it to be somewhat disturbing once I actually realized what was going on. Before that point, I was just going,” Hey! That dude looks like the guy from Shawn of the Dead!” Turns out it WAS him after all.

The main thing this movie has going for it is Charlize Theron. Ravenna is very under-developed as a character, like everyone in this damn movie is, but Theron does as much with the role as she possibly can. In addition to being striking-looking in terms of costume and make up design, Theron just OOZES sensual evil. It’s a nice piece of work.

Another plus is the beautiful design work put into the world of Snow White and the Huntsman. From sprawling, dense, dead forests to mythical fairy kingdoms, the creativity in the environments is pretty impressive, as are the video-game graphics used to bring them to life.

Chris Hemsworth does a solid job of reprising his role of Thor…he’s charming and all, but doesn’t exactly dazzle. But the real weakness of Snow White and the Huntsman is Kristen Stewart. Well, not her, so much as her character, and how much she basically sucks.

The movie (and even some reviewers!) has been touting itself as “feminist” and “empowering for women” and the character of Snow White as a “warrior princess.” To those ideas, I send a hearty LOL. Ellen Ripley, Sigourney Weaver’s character from the Alien series…now THAT’S a symbol of bad-ass female empowerment. Stick-figure Kristen Stewart fumbling through the forest, waiting for her two hunky love interests to stop fighting over her and come and rescue her (gee, sounds like Twilight all over again, huh), only to finally don armor and wield a sword in the movie’s last five minutes after receiving no training and do…well, really nothing actually. She’s as weak, helpless, and pathetic in this movie as she was as Bella Swan in Twilight, although I will admit that her acting is at least marginally better here.

So, Snow White and the Huntsman is pretty, vapid, and ultimately pointless and a total bore. Skip it.