(Long Island, N. Y.) Yes, I’m a Trekkie, or Trekker, or whatever the hell you want to call it. I love Star Trek. I grew up on it, and Captain Kirk has always served as my personal hero of sorts. The crew of the USS Enterprise has always served to elicit a warm and fuzzy reaction from me, as if these people were actually family. And I’m sure a lot of people out there feel the same way.

When director J. J. Abrams was announced as helming a reboot of the groundbreaking 1960’s sci-fi TV and film franchise, starring a new young batch of actors portraying their iconic counterparts in an alternate timeline (so as not to be weighed down by 40 some-odd years of continuity), I had my doubts; however, I went into it with an open mind, unlike some Trek fans who wanted to kill themselves, and possibly Abrams as well. But, being a reasonable person, I took this event as a positive thing.

You see, for people complaining that this new Trek is “not like old Star Trek,” I have to say that, after five TV series, a boatload of movies, games, books, comics, and so on, that era, while awesome, has been played to death and beyond. I’m ready for something different. And, despite some warts, Abrams delivered big-time with his reboot, giving us a look at the formative years of the Enterprise and its intrepid crew well before they ever embarked upon their fabled five-year mission to “boldly go where no one has gone before.”

Now, after a bit of a delay, Abrams has delivered a sequel, entitled Star Trek Into Darkness, and despite the somewhat goofy title, I easily loved it as much as the first film.

The cast from the 2009 film all return to reprise their roles, with Chris Pine impressively filling the intimidating shoes left by the great William Shatner as Captain James T. Kirk; Zachary Quinto continues to embody Leonard Nemoy’s Spock; the awesome

Karl Urban (Judge Dredd!) still manages a dead-on take of DeForest Kelly’s “Bones” McCoy while infusing his own elements into the ship’s doctor; and Zoe Saldana, Anton Yelchin, Simon Pegg, John Cho, and Bruce Greenwood round out the great cast. 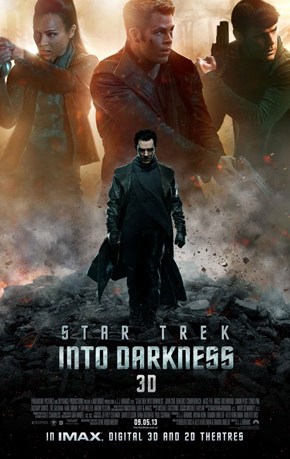 New to the sequel are Benedict Cumberbatch as the surprise mystery villain, Peter Weller (Robocop!) as Starfleet Admiral Marcus, and Alice Eve, who plays Marcus’ daughter despite possessing a thick British accent while her father is clearly American. This is never explained, but really, Eve’s character is really just there to look hot and that’s pretty much it, so does such a linguistic oversight really matter?

The plot? I’ll skimp on this, but suffice it to say that Kirk and his crew are caught in the middle of a conflict between the United Federation of Planets, the warlike Klingon Empire, and a clandestine attempt to start a war amongst the two by a mysterious third party using a long-forgotten race of superhumans as their secret

weapon. It’s solid, enjoyable stuff, but not without its plot holes and inconsistencies; nonetheless it gets the job done in grand fashion and drives the many character-driven scenes that are this new Trek’s trademark.

Other than Benedict Cumberbatch being awkwardly shoehorned into needlessly inhabiting the role of an old-school Trek villain who was made timelessly iconic by someone else (but, that aside, he nonetheless turned in a great performance…just not as good as “that other guy”), a horrible scene involving a tribble which might be the most forced, awkward, and overall lame bit of foreshadowing in film history, an invention by Bones that leaves open a major loophole for future movies, and Simon Pegg’s distractingly bad hairpiece, Star Trek Into Darkness was, for the most part, a great, great movie.

Yeah, certain things can be nit-picked, but I still enjoyed the hell out of it. In theory, replicating certain elements of a classic Trek film (which will

remain unnamed here due to avoiding spoilers for those who haven’t seen this movie yet) should have been stupid, but in reality, I think it worked, and overall, the film was fun, funny, fast-paced, and very exciting, with as much emphasis on character and emotion as there was on action and explosions (hey, that almost rhymed!).

However, there’s one other thing about this movie that I feel needs to be addressed- a sudden, awkward, and oddly out-of-place cheesecake scene involving Alice Eve in her undies for no apparent reason other than trying to appeal to the perceived audience of Star Trek, which filmmakers obviously feel must be

sex-starved teen perverts who have never seen a real girl in their lives. It’s a scene where Chris Pine and Eve are talking while she’s prepping for a mission, and instead of cutting the conversation short and changing in privacy, she decides to trust Kirk as a gentleman to not peek while she strips down behind him to change into a jumpsuit. Of course, Kirk eventually looks, and we’re treated to a rather impressive shot of Eve’s Victoria Secret-caliber body for no reason other than to show off how hot she is. Harmless fun, right?

Perhaps, but not really.

Now, don’t get me wrong- I found Eve to be rather easy on the eyes and certainly didn’t mind catching a glimpse of her goodies, but on a base level, as a man, I couldn’t help but be offended. I mean, is this what moviemakers think attracts the male sci-fi watching demographic? Do they think that, as men who gravitate towards this genre, we fiend for an obligatory boob shot from out of nowhere because our attention can’t be held by a solid plot and characters we like? It’s kinda insulting when you think about it, because this stuff is present in a lot of material aimed towards “geek” culture. And what about all the women that enjoy Star Trek?

There’s a lot of them, mind you…how do they feel about blatant sexism being inserted into their once-progressive and liberally-minded sci-fi franchise?

Sorry, just needed to rant for a second.

But overall, as I said, I enjoyed Star Trek Into Darkness as much as the first movie, and as excellent as the original was, matching it was a tall order. Abrams and his cast and crew have delivered, the prospect of more adventures with this new crew has me giddy with excitement. However, Abrams is heading into the director’s chair for the next Star Wars movie (some would argue that, given the change in style of his action-packed Star Trek films from their original incarnation, he has already made two Star Wars movies), so it’s likely that he will not be involved with a Trek sequel, but hopefully whoever takes over the series will avail themselves just as well as he did with our beloved property. Highly Recommended.