(Long Island, N. Y.) Taken…oh, how I love thee. Liam Neeson’s lovingly-crafted ode to blood, death, and bodily dismemberment was a highlight of 2008 for me personally, and a much-needed shot in the arm of the limp and floundering action movie genre in general, which had unfortunately lost a great deal of its vitality and manliness in recent decades.

Taken is the tale of ex-government agent Bryan Mills (Neeson), whose daughter Kim (Maggie Grace) is kidnapped while vacationing in Paris, France and sold into an evil Albanian sex slavery ring. Using his “particular set of skills,” Bryan arrives in Paris and proceeds to destroy approximately 80 percent of the population in the most reprehensible and brutally awesome ways possible until Kim is safely back in his bloodstained hands. Nothing says love more than mass murder, folks.

Taken is a high water mark of action films for a number of reasons. Most notably, after the heyday of 80’s Action flicks, modern action movies began a horrific slump into sensitivity and passiveness that all but emasculated the genre, rendering movies such as Four Weddings and a Funeral more hard-hitting than, say, Gamer or The Condemned. But, out of nowhere came Taken, which featured Liam Neeson as an utterly ruthless human meat grinder who was all too willing to shoot, bludgeon, maim, and dismember anyone who got in his way (even innocent bystanders) until his daughter was safe. Who couldn’t get firmly behind that?

Another reason Taken succeeded is the fact that someone had the brilliant idea to cast a lead that could actually ACT as well as annihilate. Enter THE MAN, Liam Neeson, distinguished Irish actor of stage and screen whose career in recent years apparently have become that of Charles Bronson; a welcome transition, I must say. At 6 foot 4, he makes for an imposing presence, and to have his dialogue ring true and actually convey emotion and sentiment instead of the garbled and stuttered nonsense issued forth by most modern action heroes greatly helps you to buy into his cause and care about his character, even while he’s gleefully feeding the electrical current of the most romantic city on Earth into a dirty Albanian dirt-bag during an impromptu torture session. 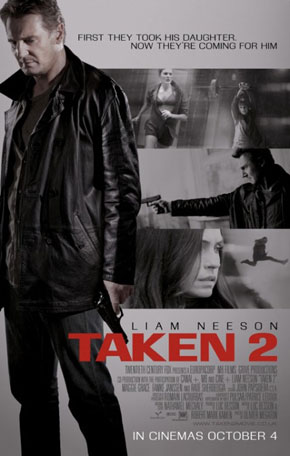 Taken was a massive success, and, of course, success in the film biz almost always translates into sequels. Surprisingly, one didn’t materialize right away, and soon talk of Taken 2 became the stuff of legend. You know, someone heard something from his father’s brother’s cousin’s friend about how maybe they were making it sometime next year. It got aggravating after a while, since I was fiending for a

sequel, despite knowing that it would be an uphill battle to craft something that measured up to the nearly-perfect original. But, finally, a continuation of the epic story of Bryan Mills finally came to light…Taken 2 is now a reality.

Despite my previous fears to the contrary, Taken 2 is actually very good, although not quite as good as the first film. However, I knew there was no way it was going to be – again, how do you top near perfection? So, instead, I took it for what it was and had a great time. Overall, it was fun and it didn’t feel like a re-hash of the first movie, amazingly, despite sharing many of the same plot points.

This time, the relatives of the degenerates dispatched by Bryan in the first Taken come after him for revenge while he’s vacationing in Istanbul with his daughter Kim and his ex-wife Lenore (Famke Janssen), whose current marriage is conveniently on the rocks. In a nice twist, Bryan and Lenore are “taken” this time, which leads to a fun sequence where Bryan instructs Kim via a hidden cell phone on how to track him down by hilariously chucking grenades randomly throughout the city while he gauges his distance from the sound of the explosions. It’s fantastic, and once Bryan gets free, the carnage begins once again; this time, its Lenore’s life on the line, and Bryan starts tracking her down, slaughtering scum all the while.

Do I have to mention that Liam Neeson remains godlike in this role? I believe I’ve already made that abundantly clear, but just in case you didn’t get the idea I was trying to convey, here it is in black-and-white: Neeson still delivers the goods like no one in Hollywood today, even at 60 years of age. It’s a fact.

Maggie Grace gets to actually do something semi-substantial this time around, although the four years since the

first movie have not be kind; I liked that she now looks 30 but is still supposed to be in high school, with the movie including sub-plots involving passing her driving test and her first boyfriend (lol). It made for the most unintentional age-related laughs in a movie since The Fast and the Furious: Tokyo Drift featured an apparently 45 year-old high schooler in the lead.

My only complaints center around the direction of Olivier Megaton, who replaced the director of the original film, Pierre Morel. Morel crafted a brilliant film where the action was in plain sight; cut and framed well, it flowed beautifully and never came close to inducing epilepsy in theater patrons. When it was announced that Megaton was helming the sequel, I had some worries, as I had seen his work, and was familiar with his habit of fast cuts and quick editing in his fight scenes; alas, that trend continues here, making Neeson’s ballet of death a bit harder to discern and robbing it of some impact.

you could tell that the violence was cut to ribbons to make a PG-13 rating, to the point where some of the kills almost don’t make sense; if you don’t notice the quarter-second shot of a coat hook behind the head of a baddie, you might think that Bryan kills him simply

by putting his hand on his face. The Vulcan Death Grip, perhaps? Anyway, I can’t wait to watch the real version of this when the unrated version hits DVD.

It’s not as good as the original, but Taken 2 is still fun and easily upholds the magical belief that a lone man can depopulate a mid-sized European nation in a tide of

blood and bullets in order to maintain the sanctity of his family. Check it out.