(Long Island, N.Y.) I can’t believe it. Ted is actually a good movie. I mean, I reacted probably like pretty much anyone did when they saw the trailer for Family Guy creator Seth MacFarlane‘s feature film directorial debut starring a foul-mouthed stoner teddy bear…I thought it was the dumbest freaking thing I’d ever seen and quickly forgot about it. There’s no way this could be good, I thought to myself. But I was wrong. WRONG.

Not only it Ted a good movie, but it’s actually the best

comedy I’ve seen in recent memory. Yes, really. One big reason for that fact is this- most comedies have a few good laughs; even the bad ones. But they almost all lose steam about maybe the halfway mark, usually about the time when their main characters undergo some sort of moral awakening and try to be better people. Not Ted. This movie remains funny from beginning to end, which is an amazing feat.

That’s not to say that the main characters of Ted don’t undergo some sort of moral awakening and try to be better people – they do – but they manage to do so while remaining funny. This is almost unheard of in the comedy genre. Now, Seth MacFarlane’s hit TV show, Family Guy is typically a love-it-or-hate-it kind of show (I myself find it amusing, but I wouldn’t call myself a total fan), but after watching Ted, I can’t wait for MacFarlane’s next film, whatever it may be.

Ted is about a young boy named John Bennett, who, when growing up, is so un-liked that he finds himself envying the kids in the neighborhood whom the bullies actually bother to take the time to beat up. Sad and alone, he makes a wish Christmas evening that the teddy bear he got as a present would come to life and be his BFF. And, lo and behold…it happens!

And no, this isn’t a case of John going insane and thinking his bear is alive in a Calvin and Hobbes sense…the bear really comes to life for everyone to see (thanks to the miracle of computer graphics), and as a result, Ted (as John names the bear) becomes a minor celebrity for a while. John and Ted become inseparable, which works out great when you’re a kid, but what about when you later grow up into a 35 year-old? 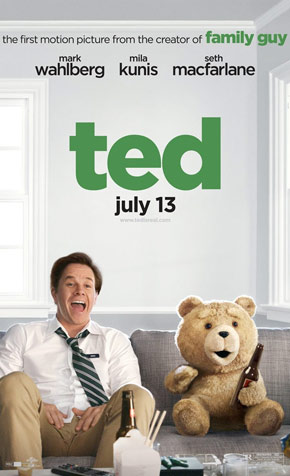 Adult John (played by Mark Wahlberg) has grown into a pot-smoking slacker who basically hangs out with Ted (voiced and motion captured by Seth MacFarlane) while watching cartoons and the awesome 80’s cheese-fest Flash Gordon all day long. Occasionally, he goes to his job at a car rental agency. However, he’s somehow managed to snag a great girl in the form of Lori Collins (Mila

). Of course, eventually Ted’s antics start to affect John and Lori’s relationship, since Lori wants things to move to the next level and John, with Ted’s help, is stuck in this limbo of extended adolescence.

From there, the film sees John and Ted trying to grow up and take on adult responsibilities, with Ted moving out, getting a job and an apartment. However, will John ever be able to truly grow up, or will he continue to test his relationship with Lori by getting pulled back into the wild party scene by Ted? Even if they’re parties attended by Sam J. Jones, AKA Flash Gordon himself? By the way, his scenes practically steal the movie, especially if you’re a Flash Gordon fan (guilty!).

On paper, Ted could have been a one-note, no-brainer pothead comedy, but thankfully, it aspires to be far more than that. The characters are all endearing and have wonderful chemistry with each other. Wahlberg, who can be hit-or-miss, is clearly WAY on his game here, and plays the man-boy John perfectly. MacFarlane’s Ted could have easily been the Jar-Jar Binks of 2012, but as MacFarlane’s plays him, he’s consistently funny, rude, and nasty, but those characteristics are tempered by the caring and affection he shows for John and Lori. You actually like the characters in this movie – at points they all make sacrifices for the sake of their loved ones – and you WILL find yourself rooting for them.

the goofy trailers put you off, as you’d be doing yourself a disservice by missing this one just because you think it’s about a stuffed bear smoking weed and cursing. Well, that IS what it’s about, but there’s much more to it than that. Check it out.