Teen Pregnancy on the Rise…

After years of decreasing the teen birth rate increased in 2007, which was quite a shock to health officials nationwide. They claim this is a result of abstinence only education and that teens who do engage in sexual activity do not know how to prevent pregnancy. Apparently, this occurrence is not set aside for just average teens but celebrities as well are doing their part to increase the teen pregnancy rate.
The Spears Effect

Is the Spears’ family cursed, or what? Just this week 16 year old Jamie Lynn Spears, sister to Britney Spears who stars in Nickelodeon’s “Zoe 101”, announced she is three months pregnant with long time boyfriend Casey Aldridge’s child. The couple were not planning a pregnancy and apparently Jamie Lynn did not want to go on the pill because she didn’t want to get fat. 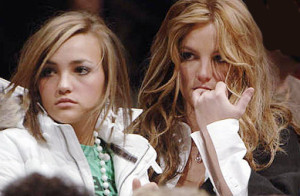 You don’t want to get fat, which with the pill it would be just a few pounds and many doctors say that it’s just a myth anyway so you might not gain any weight at all. So, it hardly seems worth risking a pregnancy at 16 for just a couple pounds. I mean, hello Jamie Lynn, pregnancy adds on lots of pounds. It seems risking a couple pounds for the prevention of such an event would be a good tradeoff. Apparently the Spears did not take a class on good decision making.

I guess kids will just be kids and always have that “It can’t happen to me” attitude. I don’ t know what is so difficult about using a condom if you prefer not to take the pill, but kids who are willing to engage in adult sexual behavior must understand the consequences of their behavior. It seems quite odd that after all the drama Britney has been going through for the past year that Jamie Lynn would have seen what bad choices can do for someone in the entertainment business. You would think she of all people would have taken note and said to herself “hmmm, I don’t want my career to be shot in the foot,” and she would have taken a little more responsibility for herself. I guess that would be asking too much.

On the other hand, you would think that Jamie Lynn had enough money that she could have gone on the pill, bought condoms, or purchased any other kind of pregnancy prevention device without her parents ever knowing. Lack of money is a complaint of many teens who become pregnant, but it does not seem that this should have been the case with Jamie Lynn.

So, exactly what was going through this girl’s head? More than likely nothing at all. She is a celebrity and accustomed to getting her way. She wanted to sleep with her boyfriend and most likely had many times before with no pregnancy to show for it. So, she probably thought that she could do whatever she wanted without any ill effects. Well, now she is 16 and three months pregnant and who knows how this will affect her career. She will be lucky if she even has a career after this blows over.

This situation does present an interesting question, however, which is how much being a celebrity affects a young person. Look at all these stars who became famous while they were young and have made horrible decisions as a result. When you compare Jamie Lynn to people like Britney, Lindsay, or even Paris, it seems that a simple pregnancy really is not that big of a deal.

While regular teens deal with peer pressure and making responsible decisions young celebrities are pigeonholed so to speak. They receive a positive response to everything they desire and believe that whatever they want they should get. Parents lose control over their celebrity teens and the child begins to get out of control. This could be from underage drinking and smoking to sleeping around, doing drugs, going to bars, and basically engaging in adult activity that teens should not engage in. And, while all teens face the same issues many times it appears celebrities are the most vulnerable.

What Can be Done?

Parents need to take control in my opinion. Regardless of whether your child is average or a celebrity there needs to be control. For example, kids should not be left alone with their boyfriends or girlfriends. This may seem extreme, but it is better than having a pregnant daughter. Also, parents need to get over their selves and have the sex talk. And I am not talking about the birds and the bees. I am talking about a real sex talk. Explain what can happen and be honest about how you feel. However, let your child know that while you don’t support them having sex before they are married you realize they will make their own decisions. Let them know you will buy them birth control pills or condoms and support their decision to have safe sex. Notice I did not say support their decision to have sex, but rather their decision to have safe sex should they decide to have sex. That may sound confusing, but not approving of your child’s behavior while approving of them engaging in that behavior in a safe manner is something parents should embrace.

As parents we must be open and accessible to our children. It does not matter whether you buy your kid condoms or not, they will have sex if they want to. So, it is best to know what is going on and do your best to provide safe alternatives. When you guide your kids down the road to responsibility and safe sex you just might realize that you have raised a child aware of consequences who will choose to wait until they are really ready. This goes for all teens, celebrities or not.