For the first time a US primetime program produced fifty percent or more in a language other than English, won an Emmy. This will be a permanent category moving forward. “Mad Men” stars Christina Hendricks and John Slattery presented the International Emmy Founders Award to “Mad Men” creator, Matthew Weiner. I was thrilled to interview President and CEO Bruce Paisner. 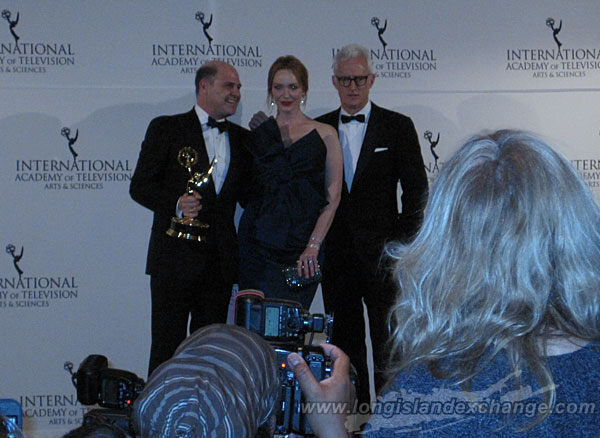 Bruce Paisner: I am Bruce Paisner, President and Chief Executive Officer of the International Academy and I am looking forward to tonight’s gala and festivities.

Cognac: This year it promises to be your best event ever.

Bruce: It’s going to be a terrific event because we have two phenomenal honorees, Matthew Weiner who is going to get the Founders Award, Creator of “Mad Men” of course and Roberto Irineu Marinho who is the Chief Executive of Grupo Globo the largest television company in Brazil and South America.

Cognac: And you have two wonderful stars presenting the award John Slattery and Christina Hendricks.

Cognac: That should be very exciting. I look forward to interview them and I Hope they will walk the red carpet.

Bruce: I don’t know, I imagine.

Cognac Tell my audience where we can go to find out more information on the International Emmy Awards.

During the course of my red carpet interviews, I briefly spoke to Actress Laverne Cox. Laverne Cox is the critically acclaimed actress who currently appears in the Netflix original series, “Orange is the New Black.” Ms Cox portrays the groundbreaking role of ‘Sophia Burset,’ an incarcerated African American Transgender woman. Laverne is the first trannie of color to have a leading role on mainstream television and Time Magazine recently titled ‘Sophia Burset’ the fourth most influential character of 2013.

Cognac: Now you are presenting tonight?

Laverne: Yes I will be presenting for the International Documentary.

Four Emmy Award Nominee John Slattery and one of the stars of “Mad Men” could not resist chatting with me on the red carpet.

John Slattery: I have a place on Long Island as soon as I saw that your outlet was Long Island, I had to come back.

Cognac: This is going to be on in the Hamptons.

John Slattery: That’s where I live. I like your outfit by the way.

Cognac: Do you? It’s very sixty’s I wore it just for you.

John: You did. Well I appreciate it.

Cognac: I am very in love with that era. When I was a kid in the sixty’s I couldn’t wait to grow up and look like ‘Joan.’

John: Really, that doesn’t make any sense. You couldn’t have been a kid in the sixty’s and want to look like ‘Joan.’

Cognac: I was, I was little girl in the sixty’s.

John: Oh, I get it and you wanted to look like she looks. I see, yeah.

Cognac: Yeah, so now you understand what I am saying. So how did you get this role on “Mad Men.” Was it many auditions processes for the role?

John: I auditioned for the part of ‘Don Draper’ they told me to come in and read for that part. They lied to me basically because they didn’t think I would come in and audition for the role of ‘Roger Sterling’ because it was a small, couple of lines, couple of scenes in the pilot. So then they said we want you to play this guy.

Cognac: You are much more suited for that role.

Roger: Yeah, once I realized that they already had John Hamn, this was better.

Cognac: You look like many of the bosses I had when I was a secretary. I did that, I was like ‘Joan.’ I used to type,

John: Did you miss that? ‘Joan’ had a hard time of it.

Cognac: I had a hard time too. Now I do this. I am a Talk Show Host and an Entertainment Journalist.

John: Yeah this is much better.

Cognac: What’s next for you?

John: I just did a couple of movies, “Ted II” the sequel to “Ted.” I did “Mad Men.” I have a new movie called “Spotlight” which will be coming out next year about the Boston Globe, the scandal about the Catholic Church.

Cognac: These are going to be films, not television?

John Slattery: Yeah, next year. I haven’t done any television.

The highlight of my evening was when I met Eleven Emmy Award Nominee Matthew Weiner, The creator of the groundbreaking TV series “Mad Men.”

Cognac: I am here with the Creator of “Mad Men” Mr. Matthew Weiner. He is the recipient of the Founders Award. How fabulous, that is the biggest award here tonight. What does it feel like to receive this award?

Matthew: It’s a tremendous honor. It makes me feel a little bit old but your glad your getting it and I think because it is the International Emmy there is something really pleasing about that. It took a long time to get the show on the air. Seven years.

Cognac: Yes, I read that.

Cognac: I must tell you, I am in love with the 1960’s era. I grew up in that era and I couldn’t wait to grow up and look just like ‘Joan’ and wear my hair high and false eyelashes and mini skirts and then when I grew up it was the hippie era and I hated it. So watching that nostalgic show was just one of the best shows on television for me and it won so many awards and it keeps winning.

Matthew: Its been a great experience. I don’t know what else to tell you. It hasn’t really sunk in on some levels.

Cognac: What’s next for you?

Matthew: I don’t know yet. I am going to do a bunch of things probably all at once, but right now I am resting.

Mr. Weiner is an American writer, director and producer. Not only is he the creator of the AMC television drama series “Mad Me” he is also famous for his work on the HBO drama series The Sopranos, on which he served as a writer and producer during the show’s fifth and sixth seasons from 2004 through 2007. Weiner has received nine Primetime Emmy Awards for his work on “Mad Men” and The “Sopranos.”

The International Emmy Awards recognize excellence in global television programming. The International Academy of Television Arts & Sciences is a membership based organization comprised of leading media and entertainment figures from over sixty countries and five hundred companies from all sectors of television including internet, mobile and technology.

Their mission to recognize excellence in television produced outside of the United States. The International Emmy Awards in twenty categories.

For more information go to www.iemmys.tv.