(Long Island, N. Y.) When it comes to the legendary icons of slasher movie history, I’m a Jason Voorhees guy. Always have been, always will be. Guys like Freddy, Michael, and Pinhead have always taken backseat to my hockey mask-wearing hero. Sure, these dudes can be entertaining in their own right, but when it comes to a high cinematic body county of stupid, drunken, sex-obsessed teenagers, Crystal Lake’s most infamous machete-wielding resident is my go-to guy.

You’ll notice that I’ve not mentioned yet another well-known slasher star- Leatherface, he of the Texas Chainsaw Massacre. Sure, he’s got his loyal fan base, but to me he’s always been kind of a second-string character; the kind of guy who is usually banished to the kids table when all the horror movie stars gather for Thanksgiving dinner, along with scrubs like Candyman and Chucky. He can be effective in his own right – after all, a 6’5″ maniac chasing after you with a chainsaw while wearing a human skin mask can be rather imposing – but Leatherface has (to me, anyway) been missing that “X-factor” that separates the great killers of horror from the ‘eh’ ones.

However, that doesn’t mean that he doesn’t pull in the bucks at the box office, so here I am reviewing “Texas Chainsaw 3D,” the latest installment of the series. Rather than a continuation of the reboot made several years ago, this entry serves as a direct sequel to the original 1970’s film. Leatherface (Dan Yeager) and his lovely family of murderous, cannibalistic wackjobs have just been served a nice dose of vigilante mob justice after their latest victim managed to escape and alert the authorities. An honest attempt at arresting the family gets out of control and soon they are filled with many, many bullets and their backwoods Texas farm is burned to ashes; the only survivors are, unbeknownst to the mob, Leatherface himself and his infant cousin. While L-face heads for parts unknown, the infant is discovered and covertly taken by a couple who raise her as their own child.

Fast forward to the modern day, and we discover the first of the many problems that plague Texas Chainsaw 3D. Now, as I said, this is a sequel to the original movie…a movie that is set in the early 70’s, but then continues its narrative in what is clearly 2013…approximately 40 years later. Yet the infant the couple spirited away from the farm, Heather (Alexandra Daddario), appears no older than maybe 20, which begs the question: how is this possible? I mean, the film is obviously set in the 2000’s, since we have rap music, current fashions and cutting-edge slang being brandied about, and current model cars are everywhere.

The time problem gets even wackier when Leatherface pops up again, just as spry and energetic as he was…40 years ago? I mean, even if he was 20 at the time of the original movie (and that’s being kind), he’d be at least 60 now. Probably older. Yet he can still chase screaming kids through dense forest undergrowth like a pro. Hey, give me some of what he’s been eating… 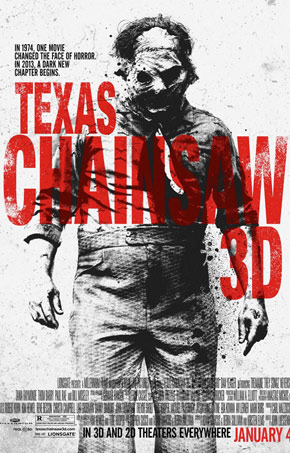 Anyway, I haven’t even really covered the whole plot of Texas Chainsaw 3D yet! So, Heather discovers that she was adopted and that her real grandmother, a woman she has never met, has died and left her an estate in Texas. As per the norm for movies of this sort, this calls for an immediate road trip so that Heather can bring her boyfriend, her scantily-clad best friend, and a whole host of other hard-partying dolts that Leatherface can rack up an impressive body count with. ‘Cause you KNOW he’s living at grandma’s estate, right? Really, it’s no surprise…and neither is anything else that happens in this movie.

Actually, there IS a surprise…when Heather discovers the family connection between her and Leatherface, she sides with him against an evil town Mayor and his corrupt police force, despite the fact that the chainsaw-wielding psycho HAD JUST KILLED ALL OF HER FRIENDS. I was shaking my head at that one, folks. I mean, blood is blood and all, but when you’ve just watched your long-lost cousin get his kicks by hanging one of your pals on a meat hook and then slowly cutting him in two, it’s time to rethink family loyalty.

Overall, Texas Chainsaw 3D is a bad movie, and would probably would have scored even lower if it didn’t have some of the hottest women on Earth starring in it. I know ALL horror movies have hot women in them, but the producers of this one must have scoured the Earth looking for extraordinary examples of womanhood because they knew the film had no other redeeming features to its credit whatsoever. The plot is predictable and by-the-numbers; the dialogue is cliché and stupid; the characters vapid, soulless, and annoying; and the kids all do the typical horror movie activities that always get them killed, such as wandering off by themselves to investigate creepy houses, mysterious underground passages, and sealed steel doors. Hey, that door is probably sealed for a reason…oops, too late for you, buddy. Your head is gone now.

I want to at least say that, as a horror fan, I was at least satisfied by the gore effects, but even they hit stumbling blocks at points. There were instances where the filmmakers used very effective practical effects to convey the bloodletting on display in Texas Chainsaw 3D, but then they’d turn around and do a kill using horrible, PlayStation One-quality CG for some unknown reason. It was very off-putting.

If you’re a horror fiend and need a fix, I guess Texas Chainsaw 3D would be okay. It was bad, but actually not boring, so you might get some kicks out of it. However, I recommend you search out a little independent film called The Innkeepers instead. You’ll thank me for it, as it’s a far better horror experience that contains loads of quirkiness and personality and none of Texas Chainsaw 3D’s failings. The choice is yours, my friends.