(Long Island, N.Y.) You know, Spider-Man 3 was only released in 2007…the decision to reboot the series a mere FIVE YEARS (it feels shorter, I know) later seems a bit crass, even by Hollywood standards. I mean, director Sam Raimi did the famous wall-crawling crime fighter proud in his film adaptations of the classic comic book. Sure, the third movie was pretty bad, because there was just WAYYY too much going on; too many sub-plots, too many villains, too much everything. But honestly, the fact that Spider-Man 3 wasn’t a total train wreck is a testament to Raimi’s talents, as a lesser director couldn’t have possibly fashioned a coherent film out of that mess like he did. Still, the film had problems, but Spider-Man 1 and 2 were good enough that I was willing to give Raimi a pass for the somewhat dire third entry in the series.

And yes, I remember giving Spider-Man 3 a good review back in the day. I still enjoy aspects of it (Venom!), but there’s this little thing called hindsight. Oh, and free will, too. Even film critics have it….yes, we’re allowed to change our minds, just like regular folk.

So, Raimi ran into problems with film franchise rights owner Sony on Spider-Man 4 and basically split that scene, and instead of just hiring a new writer/director, Sony just decided to chuck everything and start over. This news hit me in two ways…one, there were aspects of the character I felt Raimi nailed, but aspects I also felt he neglected to carry over from the pages of the funnybook. But, on the other hand…I have to sit through ANOTHER origin tale? Ugh.

Well, after much speculation, Sony announced their director for the Spidey reboot: Marc Webb (perfect name for a Spider-Man director, huh?), who’s pretty well-known for a film called (500) Days of Summer. However, I’ve never seen this movie, nor can I explain why the number 500 has parenthesis around it (that’s actually part of the title), but it was well-received by the people who actually did see it, so, despite the fact that it was 1Z1-219 some kind of little indy-style romantic comedy and not a superhero movie, I tried to keep an open mind.

Well, the reboot is here, and it’s titled The Amazing Spider-Man, and it’s actually pretty good. Not AMAZING, like the title would have you believe, but it’s a fun movie that takes the series in a different direction, stylistically speaking, and serves as a great springboard for a new franchise, as long as they can tighten a few things up. Let’s look into what makes this flick tick, shall we? 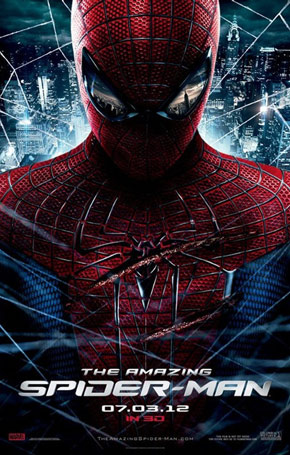 I’ll give you the short version of the origin of Spider-Man, since between Raimi’s movies and this one, and the comics, and the cartoons, pretty much everyone that even has a remote interest in watching this knows the drill: Peter Parker (Andrew Garfield replacing Tobey Maguire), nerdy high-schooler who lost his parents at an early age and who lives with his Aunt and Uncle, is bitten by a radioactive spider and given (ta-daa!) spider-like powers; he has super-strength, a precognitive sixth-sense what warns him of danger, and can easily walk on walls. As a result, the genius-level Peter ends up creating a costume and mechanical devices that enable him to produce webbing like an actual spider, dubs himself (guess what?) Spider-Man, and starts battling crime after he learns an important yet tragic lesson- with great power, comes great responsibility.

But while establishing a reputation as a vigilante, ol’ Web-Head runs afoul of first the NYPD, and later a deadly threat to the entire city…a monstrous reptilian creature called The Lizard. Oh, and he has to deal with family problems, abandonment issues, and even budding first love. Yeah…Pete’s life is a tad complicated.

So…what does the Spider-Man reboot get right? Well, Marc Webb made the right choice by incorporating aspects of Spidey into the movie that previous director Raimi left out. For example, Raimi had given Peter natural, organic web shooters, whereas in the comics he relied on wrist-mounted web-shooters that he invented himself (apparently Raimi didn’t think mechanical webs would be realistic…um, okay). Webb, meanwhile, went with the old-school artificial web devices, and this alone gives this version of Spider-Man a different flavor. Besides, there are some fun scenes where Peter’s experiments go awry until he perfects his invention.

Another thing Marc Webb nails that Raimi didn’t was…well, Spider-Man talks now. Not that he didn’t before, but in the comics, Spider-Man basically doesn’t shut up; he’s always cracking jokes, being a wise-guy, and basically driving everyone around him crazy. Andrew Garfield does this to perfection in the reboot; Tobey Maguire was a mute in comparison. Personally, I like talkative Spidey. Overall, in fact, I like Marc Webb’s Spider-Man a bit more than Raimi’s…he just has more personality.

Plus, the movie itself is just fun. Yes, it treads over very, VERY familiar ground at points, but it tries to do little things differently, and giving Spidey an actually super-powered monster to fight instead of just another dude in a costume really allows the filmmakers to cut loose with the fight scenes, which are done very well. In some ways I feel Raimi’s fight scenes, especially in Spider-Man 2, were a bit more imaginative, but Webb’s felt more true to how the fights played out in the comics. It’s hard to compare the two.

The acting’s a mixed bag. As Spider-Man, Andrew Garfield is awesome. As Peter Parker, I found myself missing Tobey Maguire, who excelled at playing a clueless yet endearing geek. Garfield? A bit too Emo and angst-filled for my tastes. Emma Stone plays Gwen Stacy, Peter’s love interest, and frankly, she was wonderful, and her chemistry with Garfield felt very real and charming. Garfield may have been mixed on his own, but when paired with Stone, the two really clicked, more so than I felt Maguire and Kirsten Dunst did in the original series (they weren’t bad, however).

Rhys Ifans plays Dr. Curt Connors, a scientist whose experiments regarding re-growing his missing arm end up turning him into a giant iguana that threatens NYC, and this character represents a hold-over from Raimi’s films…tragic villains with a sympathetic edge. I enjoyed the character. Martin Sheen and Sally Field play Peter’s aunt and uncle. They’re good, too.

What’s wrong with The Amazing Spider-Man? Well, overall, it’s got a similar problem to Spider-Man 3…too much going on that distracts from the meat of the story. There’s this sub-plot about Peter’s parents and, outside female-marketed moisturized receiving couldn’t. There’s other filler as well, including a plot about an evil corporation, blah, blah, blah. There are also little changes to Peter’s origin that are a tad silly and some of the performances suffer when compared to their forbearers in Raimi’s films.

So, it’s a matter of give and take when comparing Marc Webb and Sam Raimi’s films, each director has their strengths and weaknesses, and their films play to them. If I had to rank The Amazing Spider-Man, I’d say it’s A LOT better than Spider-Man 3, a little better than Spider-Man 1, but NOT as good as Spider-Man 2, which was amazing. And no J.K. Simmons as J. Johan Jameson takes points off as well. If you want a good review from me, put J.K. Simmons in your movie. It’s as simple as that.

Oh, yeah, the special effects and action scenes. Gotta mention those. I’ll just say that the effects remind us how poorly some of the CG in Raimi’s movies have aged and leave it at that. Suffice it to say, The Amazing Spider-Man looks every cent its $220,000,000 budget. The action scenes are solid, sometimes even fantastic, but sometimes they fall a tad flat. They’re blockbuster quality at times, made-for-TV-movie quality at others (this is an area where Raimi’s films succeeded a bit more). I will say that I got a kick out of the fact that Spidey had to adjust to his powers and ended up being a bit of a klutz at first, which was a nice touch.

So, while it’s still hard to believe that a super-successful franchise is being re-booted too soon, once you get past that shock, you’ll find that The Amazing Spider-Man is a great film in its own right, warts and all. How great this new franchise will be remains to be seen, however, but it’s off to a solid start.