The seeds for what would eventually become The Avengers were first sown back in 2008’s Iron Man, Marvel Studio’s very first in-house film project after farming their properties out to other studios for years beforehand. Marvel would then continue the buildup by releasing The Incredible Hulk, Iron Man 2, Thor, and Captain America: The First Avenger, with the goal being to eventually release a film that teams up these individuals in a virtual superhero smorgasbord, and in doing so, shatter loads of box office records and possibly becoming the biggest moneymaker of all time. We’ll see, but if there’s a movie that deserves it, this is it (certainly more-so than Avatar).

Okay, plot recap time…you’re about to sit through a lot of actor credits:

Iron Man (Robert Downey, Jr.), Captain America (Chris Evans), The Hulk (Mark Ruffalo), Thor (Chris Hemsworth), The Black Widow (Scarlett Johansson), and Hawkeye (Jeremy Renner), are recruited by American spy organization SHIELD’s head honcho Nick Fury (Samuel L. Jackson) to battle the evil Demi-God Loki (Tom Hiddleston), who has stolen a powerful artifact known as the Tesseract and plans to use it to open a portal to Earth so his alien army can invade and conquer. Of course, someone is pulling Loki’s strings, but as for who that mysterious dude is, well…you’ll just have to wait for the sequel. Or just watch the post-credits sequence. Either or. 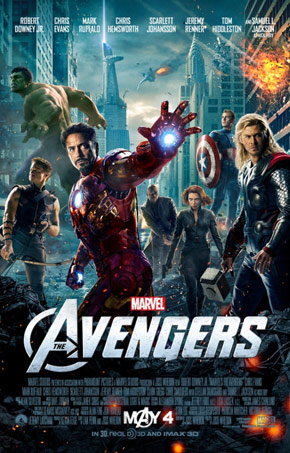 Honestly, given the size of the cast and the egos involved, this movie could have very, very easily become a super train-wreck the likes of which have never been seen before, but somehow director Joss Whedon managed to craft a tale that remains coherent, fast-paced, and exciting throughout. I’ve never seen a movie juggle so many characters so well in my life. Each character is represented perfectly and each and every one of them is given their chance to shine; no one is shoved to the background, ignored, or marginalized. The Avengers is what The Expendables tried so hard to be but so totally failed at doing; assembling a dream team of characters and blending them together perfectly while retaining each of their individuality. In contrast, The Expendables was just about Stallone and Statham…everyone else was reduced to scrub status and given the boot until the shootout at the end.

The plot keeps things moving along and does a great job of combining extremely witty humor with gravitas where appropriate. As far as character development or back stories, there’s precious little of that, but that’s what the character’s individual films were for; their tales where already set up so they could just get together and cut loose in The Avengers, and that approach works to perfection. After all, if they stopped to cover everyone’s thoughts, feelings, motivations, histories, etc, the film would have been a total clusterfu…um, I mean, a real mess. As it is, the movie runs well over two hours, but is so entertaining that I only noticed the length when my butt started hurting; the rest of me was otherwise having an awesome time.

If you’re familiar with the performances of Downey, Jr., Evans, Hemsworth, and Johansson from their previous outings, they all continue to do their alter-egos proud, but the real surprise here is series newcomer Mark Ruffalo, who inherits Bruce Banner/The Hulk role from Ed Norton, and if you ask me, does one better with the part. Gone is the annoying angst, and in its place is a calm and almost playful acceptance of the fact that Banner has a super-angry steroid monster buried deep inside, just itching to bust out and destroy some real estate. And when he finally does….man, oh man. It’s a hoot!

Jeremy Renner’s Hawkeye is very cool, which is amazing, since I could never stand the character in the comics. Hiddleston’s Loki is the ultimate smarmy villain and a load of fun, and Sam Jackson is Sam Jackson playing Sam Jackson…as Sam Jackson always does.

The story of The Avengers is solid, the acting top-notch, the pace blazing, the action scenes mind blowing and a total joy to behold (thanks to some fantastic cinematography), and the special effects even managed to wow a jaded grump like myself with their grandeur and technical wizardry. Honestly, I can’t even find anything to nit-pick about this one…I wouldn’t change a thing. Oh, and the enormous battle at the end with The Avengers squaring off against an entire army of alien freaks and weirdos in the streets of Manhattan? It’ll knock your eyes out and leave ’em spinning in tight little circles.

In other words, The Avengers is a nearly perfect film, within the constraints of the superhero genre, of which it currently sits as the greatest example of (alongside films like X-Men: First Class and the first Iron Man). Marvel and Joss Whedon really knocked it out of the park and beyond with this one, and for the sequel, Marvel just needs to hand Whedon a blank check, an island full of bikini-clad women, and just get the hell out of his way. The Avengers 2 can’t possibly come soon enough, but the reality is that we’re going to probably have to wait a few years for it; Iron Man 3, Thor 2, Captain America 2, and probably others are slated to be made first. But considering the high caliber of the villain that’s slated to take on Earth’s Mightiest Heroes in the sequel, Avengers 2 will be worth the wait.