(Long Island, N.Y.) The Bourne Legacy is a good movie that didn’t need to have the word “Bourne” in its title. Don’t get me wrong; I can understand why the filmmakers wanted to cash in on the name recognition of the popular spy series now that star Matt Damon has split the scene and a new (unrelated) character played by Jeremy Renner has taken over, but honestly, the weakest parts of the movie are the half-hearted attempts to tie it into the previous movies when the film is (surprisingly) strong enough to stand on its own.

This marks the fourth film based on Robert Ludlum’s Jason Bourne novels; loosely based I should say, because other than some character names and basic plot points, none of the movies really have much to do with any of the Bourne books. It actually makes me wonder why they just didn’t make up an original name and go from there.

Anyway, Matt Damon starred in the first three installments of the series as Jason Bourne, a genetically-enhanced amnesiac assassin for the U.S. Government who went rogue after being betrayed by his bosses. Known for its gritty realism and brutal hand-to-hand combat scenes, the Bourne franchise made major bank, so it’s no mystery why the producers were keen on continuing to milk the Bourne name after Damon decided to take a walk after the third one.

Instead of rebooting the series or recasting the role, the studio instead just introduced a new character: Aaron Cross (Jeremy Renner, AKA Hawkeye from The Avengers), a genetically-engineered member of Operation Outcome, one of the Department of Defense’s black ops programs, who is betrayed and left for dead by his higher-ups when the media threatens to expose their shady doings to the world. 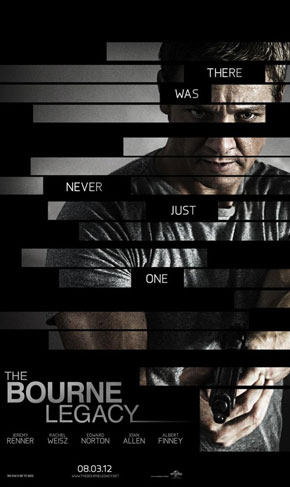 However, that isn’t Cross’ only problem. His special physical and mental abilities come from a daily series of pills he must ingest; green for muscles, blue for brainpower. Now cut off from his supply, Cross worries that he will begin to lose his enhanced abilities, but he discovers from Dr. Marta Shearing (Rachel Weisz), the scientist who had been monitoring and tweaking his meds, that his physical abilities have been made permanent; however, without treatment, his mental abilities will start to deteriorate rapidly. The kicker is that, prior to his enlistment in Operation Outcome, Cross was actually…um, shall we say, “derpy.” That is, he was a little slow, and the thought of going back to that state terrifies him.

With killers trailing both of them, Cross and Shearing race against time to cure his condition and disappear from sight for good, before a dark Government conspiracy claims them both.

I enjoyed The Bourne Legacy quite a bit. It’s the antithesis to the modern action movie, starting with a slow buildup to the action instead of just dropping the viewer right in the middle of things. As a result, it is able to concentrate more on its characters and atmosphere

than blowing up cars every eight seconds, so when the action does finally kick in it actually has more meaning and impact.

I also found the simplicity of

The Bourne Legacy’s plot incredibly refreshing and surprisingly cliché-free in this day and age of convoluted plots and ever-rising stakes. Instead of saving the world, millions of lives or even going out for revenge against those who have wronged him, The Bourne Legacy is, at its core, just about one man’s fight not to be stupid again. Honestly, that alone adds a slightly more intimate degree of emotionalism to the proceedings than your average spy/action flick, giving the film a slight feel of Daniel Keyes’ Flowers for Algernon…that is, if the protagonist was a death-dealing, bone-crushing one-man-army instead of a scientist.

Another cliché the movie thankfully avoids is shoehorning in a steamy love scene with a female sidekick. I know, there IS a female sidekick in The Bourne Legacy, but Cross never seals the deal, so to speak. The way the film is set up, it just would have come across as forced and awkward, and I’m glad they kept things plutonic. Besides, if there’s a sequel, I’m sure there will be booty time aplenty for all involved.

Actually, the main strike against The Bourne Legacy is its relationship to the Bourne series; it doesn’t actually need one. Yeah, the name will sell some tickets, but the film, on the surface, has almost nothing in common with the Matt Damon Bourne movies and could have easily, with VERY minor tweaking, been a stand-alone series. As it is, the attempts to connect it with the Damon flicks are superfluous, forced, and probably confusing to newcomers; Jason Bourne is namedropped randomly throughout the movie without any context or purpose, other than to remind viewers that yes, this is a movie with the name “Bourne” in the title, even if that character never appears or makes any noticeable impact on the proceedings.

The craggy-looking Jeremy Renner, despite being an unconventional leading man (if he grew a mustache and squinted his eyes, he’d kinda-sorta pass for the late Charles Bronson), nonetheless is a great replacement for Matt Damon and brings the goods both in terms of acting and physicality, which helps to sell you on his character’s plight and gets you behind him as he races to save his IQ from going down the toilet. Renner mirrors Damon’s skill at destroying opponents via viewer-unfriendly rapid-cut camera shots, leaving you both in awe of the carnage he has wrought and wondering what the hell he exactly did to put all those poor dead people on the floor, but the combat nonetheless remains satisfying. He also manages to run and navigate tricky obstacles (the other main requirements of the series) very well.

The rest of the cast is solid as well. I didn’t even recognize Rachel Weisz until the end credits (possibly because she did the typical Hollywood thing and got too skinny as she got older), but she played the usual impossibly-attractive genius-level scientist/damsel in distress very well, providing an excellent companion for Renner’s Cross. Edward Norton plays the bad guy who pulls the strings from behind the scenes; he’s a consultant of sorts that the Government brings in to clean up their mess when Jason

Bourne starts blowing the cover of their illicit covert ops programs to the media, and it’s really not much of a role. Norton just sits in darkened rooms barking orders at people and little else. It’s a shame, since it’s been a while since I’ve really seen the talented actor take on a meaty leading role…lately, he seems to just be coasting through his career and collecting the occasional paycheck to keep the

lights on in his various mansions worldwide.

I liked The Bourne Legacy, and I feel it’s a great starting point for a new spy/action series for Jeremy Renner, and a nice little side gig for him in-between Avengers movies. There’s no need to be a Bourne fan to hop on board with this installment; in fact, it’s best you forget the name of Jason Bourne altogether and just enjoy the new adventures of Aaron Cross.