(Long Island, N.Y.) This is a strange movie for me to review, in the sense that I really feel a strong obligation NOT to tell you anything about it. The Cabin in the Woods is the kind of movie where it’s best to go in knowing as little as possible….the experience will be all the more enjoyable for you that way.

I guess I CAN say that it’s a horror movie. Sort of. And I could say that it’s about five kids who head out to a secluded cabin in the wilderness to party and what happens from there, but not. I might even be able to get away with saying that it’s about a bunch of corporate Joe’s in shirts and ties during a normal day at work, if that makes any sense.

But the most effective thing to say about The Cabin in the Woods is that it is a deconstruction of common horror films, and the movie that Wes Craven’s Scream wishes it could have been, essentially.

The Cabin in the Woods was originally shot back in 2009 and then sat on a shelf until recently, one of the many films that were victims of the MGM’s infamous financial woes. Directed and co-written by Drew Goddard and co-written and produced by Joss Whedon (of Firefly fame), The Cabin in the Woods is basically the duo’s homage to the horror genre, which they felt had become stagnant and in need of a swift kick in the pants. 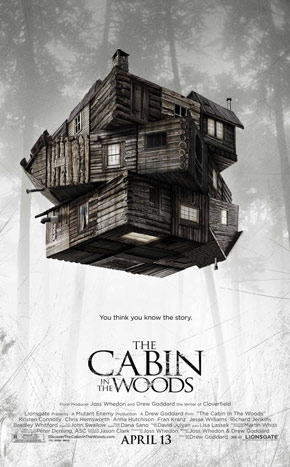 Assembling a cast of talented young actors, including Kristen Connolly, Chris Hemsworth (it’s THOR! Well, before he got all ‘roided up to play Thor, that is), Anna Hutchison, Fran Kranz, and Jesse Williams, Goddard set out to establish a film that initially adheres to all the established horror movie norms…and then simply chucks them all out the window and goes absolutely crazy.

If you MUST get some general idea of what The Cabin in the Woods is, and essentially are the type who HAS to know what you’re walking into at all times (in other words, someone who doesn’t like to have fun), I will give a brief, general description of what this movie is. However, if you’re the cool kind of person who likes to be blindsided by unique and amazing experiences, I will warn you to skip the next sentence. Ready?

I’m not saying any more…in fact, I’ve already said too much, and I hope all you cool people out there skipped even that vague description. For you lot, all I’ll say is this: if you love horror movies – TRULY love them – but are sick of the clichéd, recycled plots, stereotypes, and characters, this is a movie you should run out and embrace. It deconstructs the conventions of the horror movie genre and by the end of the movie it wraps up everything so neatly and brilliantly that you’ll walk out of the theater with a case of the warm fuzzies. And if blood is your thing, well, The Cabin in the Woods delivers that as well. Just you wait.

That, and the fact that the final third of The Cabin in the Woods is insanely fun and one of the biggest treats ever for real horror fans, should be enough to get you up and running like hell to the nearest theater showing it. It’s intelligent, clever, witty, but, unlike so many movies these days, has the restraint to hold its cards close to its chest until the end. If you’re the annoying, impatient type of clod that likes having everything spelled out for you in black and white right away, this isn’t the movie for you. But if you love that infrequent, wonderful feeling of having stumbled onto some fresh and new, not knowing what the hell is going on, and just allowing yourself to be taken along for the ride…yeah, this is what you’ve been waiting for. Besides, if you’re savvy, you should be able to figure things out soon enough.

Believe me, there’s so much I’d like to tell you about this movie, but because I do love it so, I won’t…because I want you to be as floored as I was when you watch it. Suffice it to say that The Cabin In The Woods does for horror movies what The Raid did for action movies.