(Long Island, N.Y.) When it comes to movies, the cardinal rule is to always go out strong; in other words, a good ending can actually elevate an otherwise so-so film into something pretty good. Likewise, a bad ending can really just sink a halfway decent flick straight to the bottom of the toilet tank. Case in point: The Devil Inside, a little horror movie disguised as a “documentary” about a girl investigating her mother’s supposed possession by a demon.

Let’s just cut to the chase and talk about that conclusion, as that is what’s causing the most buzz about this movie; after all, people are calling it the “worst ending of all time.” But is it? It’s certainly abrupt, to the point that pretty much every single plot point is left unresolved; the fact that the filmmakers then direct you to a website to learn more about the fates

of the cast before the credits roll just adds insult to injury. But the worst ending of all time? That’s a pretty lofty claim, and while The Devil Inside’s ending really does hopelessly mar and mangle a movie I was prepared to hate but actually ended up enjoying (at least up until that point), I still say that honor belongs to a little French horror film called High Tension, whose climax was not only impossible, but it effectively destroyed the film as a

whole. The Devil Inside’s ending were merely disappointing and lazy; High Tension’s made me ANGRY.

Anyway, The Devil Inside kicks off with a lovely triple murder committed by Maria Rossi (Suzan Crowley) during an exorcism performed on her. For some reason she’s whisked off to Rome to some Catholic loony bin instead of an American institute and bam, she’s forgotten. That is, until her daughter Isabella (Fernanda Andrade) decided to investigate what happened to her years later with the assistance of a documentary filmmaker named Mike (Ionut Grama), who happens to be investigating (you guessed it!) exorcisms. 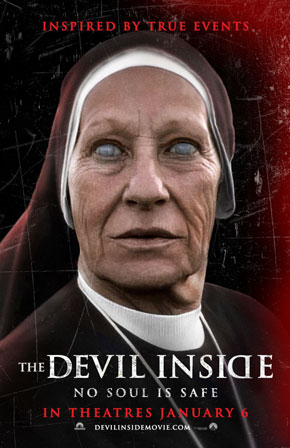 So, they fly off to Rome, and when Isabella finally has her reunion with her long lost mommy who’s still residing in a padded cell, things start getting weird. I mean, she’s quite obviously possessed by some evil citizen of the underworld, as she’s speaking in different accents (and all of them foul-mouthed!), carving upside-down crosses into her flesh, and displaying the punching power of The Incredible Hulk. With the Church unwilling to even entertain the thought that her mother may be possessed and in need of an exorcism, Isabella enlists the aid of two rouge priests, Ben (Simon Quarterman) and David (Evan Helmuth), who sneak around behind the Church’s collective back, booting demons out of poor human hosts who have no other hope for salvation.

So, armed with Mike and his ever-present camera (I love these “found footage” style movies where there’s always one guy who’s always armed with a camera no matter what, and all the other characters hate him because of it), in addition to the two gung-ho priests who are determined to get concrete proof to the Church to back their claims, Isabella sets out to rid her mother of the Satanic thingy that’s squatting in her mother’s soul. Will she succeed? Ha ha…you’ll never know, as no one could be bothered writing an actual ending for this piece of crap.

And that really irks me, because up until that point, I was really enjoying The Devil Inside. No, it’s no masterpiece of horror, but I went in hearing all the negative reviews and, as a result, my expectations were below ground level. Like, in the sewers, really. But suffice it to say, I ended up being rather surprised when I was actually greeted with a tense, creepy, atmospheric flick with some solid acting and nice European location shooting. Sure, it took a little while to get going, but once Isabella finally has her first run-in with mommy, the creep factor rears its head and just doesn’t let up until the end…when everything just gets flushed. Really, shame on the filmmakers for screwing their audience out of any resolution whatsoever…that’s just low.

So, should you see The Devil Inside? Do you like horror movies? If so, then maybe you should. But do you like movies with endings? Yes? Oh…then maybe you shouldn’t. After all, getting invested in the fates of the characters only to get smacked in the face with the cinematic equivalent of someone flipping off a light switch and rolling the credits can be a pretty major bummer. Personally, I’d say that if you do go to see it, walk out right after the final hospital scene and make up any random ending in your head. There’s no way it could be worse than the one you’d get if you stick around, trust me.

Unless you imagine High Tension’s ending. Then you’re REALLY screwed.