(Long Island, N.Y.) Sacha Baron Cohen is a genius…well, of a sort. A British comedian and interviewer who has made a career out of melting into tailor-made, subversive roles for the purpose of revealing his subject’s inner prejudice and ignorance (as well as just generating untold amounts of shock value), Cohen’s creations – Ali G, Borat, and Bruno – have freaked out a lot of people and made a huge name for their creator.

But the brilliance of Cohen’s work is how much he would submerge himself into any given character, no matter what the result; for any human being to possess the ability to relentlessly stay in character in the myriad array of real-life situations he subjects himself to in his “mockumentaries” is just crazy. Even in the face of arrest or violence, he stays the course.

Or, at least, he did. Unfortunately, Cohen became too well-known, and was forced to retire his “undercover” characters. He is currently in the process of transitioning from unscripted man-on-the-street fare to more conventional movie-making, but thankfully, his talent has proven to stand the test quite well.

This takes us to The Dictator, Cohen’s latest Larry Charles-directed film and his first starring role in a scripted production since 2002’s Ali G Indahouse. The story of “a dictator who risked his life to ensure that democracy would never come to the country he so lovingly oppressed,” the film is about the fictional North African Republic of Wadiya and its absolute ruler, Admiral General Hafez Aladeen (Cohen). Aladeen is a vain, brutal, yet childlike warlord, spending his days threatening death to all who oppose him, holding rigged Olympic Games where he knocks down world records like bowling pins, paying countless celebrities to sleep with him, and telling the world that he’s NOT building weapons of mass destruction (but…wink-wink…he is!). 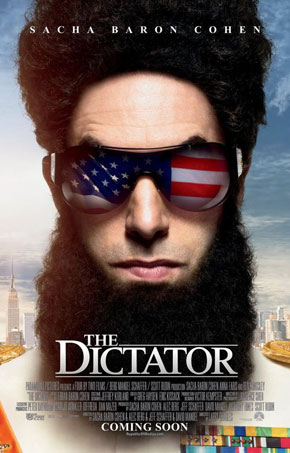 Called to New York to address the United Nations on his non-existent (wink-wink) WMD program, Aladeen is kidnapped by a hitman hired by his uncle Tamir (Ben Kingsley), who secretly wants to replace his nephew with a brain-dead double so he can declare Wadiya a democracy and sell off all its lucrative oil rights.

Rendered unrecognizable by having his trademark beard shaved off, Aladeen escapes and is forced to take refuge with a hippie activist named Zoey (Anna Farris), who merely believes that Aladeen is an oppressed refugee of Wadiya. But, of course, while Aladeen plots to retake his throne, he’s subjected to how the other half lives…will confronting his humanity soften the ruthless madman who, deep down, really just longs to be cuddled after paying to have sex with Arnold Schwarzenegger?

Has enough time past for 9-11 jokes? The Dictator seems to think so. I was impressed, actually, that Cohen’s latest film still manages to retain some of the “cringe” factor that his previous works excelled at, despite his act being directed at actual thespians and not unsuspecting citizens on the street. There are many “he did NOT just go there” moments in The Dictator, and given it’s short length, it’s seemingly jam-packed with gags and jokes, leaving the viewer feeling almost assaulted once it’s over. And I mean that in a good way.

The supporting cast is effective, sure, but this is Cohen’s show. The concept was built solely around him and his abilities, and he runs with it. While certain celebrities carve out whole careers playing themselves in each and every movie, Cohen (so far) has done the exact opposite; every character he plays is just that- a character. In fact, few people really know who the notoriously media-shy Cohen really is, which, in my opinion, actually helps make it easier to buy into who/whatever it is he’s playing at any given moment.

Do I feel stupid for not instantly recognizing Cohen when I first saw the trailer for The Dictator? Sort of, but I must point out that I DID recognize him after about 10 seconds. But it’s just a testament to his acting prowess that he’s able to pull the wool over the eyes of even so jaded a film critic as myself. Hey, it happens, give me a break…the guy’s good, and it makes me wonder how he’d do in an actual dramatic role. But now that I think about it, forget that idea…who wants to see Sacha Baron Cohen emote about something pointless when we can just watch him portray a 40 year-old man discovering the miracle of masturbation for the first time, as Aladeen does late in the movie? Like

I said, the man is a genius!

So, The Dictator is fun, funny, and even contains some teeth- Cohen’s Aladeen delivers a speech at one point about the wonders of dictatorship that uncomfortably mirrors many of the more underhanded things currently going on in OUR grand nation. Cohen is one of the most talented, bravest actors in the business today, and I recommend that you see The Dictator ASAP…at least, before running out to see The Avengers for the 23rd time, that is.