It was ten days of non-stop excitement, unmatched entertainment with over one thousand unbelievable cars as visitors from around the globe visited the New York International Auto Show at the Jacob Javits Center from March 25th through April 3, 2016.

The 2016 New York International Auto Show showcased an incredible collection of cutting-edge car designs and extraordinary innovation. More than four floors of displays from the world’s automakers featured the newest vehicles and latest futuristic concept cars. Nearly 1,000 cars and trucks were on display at North America’s first and largest-attended auto show, which dates back to 1900.

I had the pleasure of interviewing two fascinating individuals about their unique cars. One was Dave DiEugenio from the Vintage Automobile Museum of New Jersey about the extraordinary ETV Car and Entertainment Attorney Deborah A. Sable about an exact replica of The Chitty Chitty Bang Bang Car.

Cognac: Welcome back darlings. I am Cognac Wellerlane and we are here at the New York International Auto Show at the Jacob Javits Center and I am here with this interesting gentleman. He is from the Vintage Automobile Museum of New Jersey and he is going to introduce himself to the camera.

David: Good morning Cognac. My name is Dave DiEugenio and I am the Executive Director of the Vintage Automobile Museum of New Jersey.

David: We are so pleased to be here at the New York International Auto Show. We are proud of our antique cars and so flattered that you asked us for an interview.

Yes, I was taken aback by this amazing machine. This is the car of the future. Explain to my audience what we are looking at right here.

David: This car is called the ETV that stands for Extra Terrestrial Vehicle and it was handmade in Florida by a gentleman there from a frame of a Chevrolet Aveo. It is a four cylinder gasoline engine and this gentleman drives it around.

I can’t believe he drives this car around.

David: Let me explain he turns the key on it has air shocks that rises a foot above the ground and you can see the tires and wheels and it drives down the street like any other car.

Does it fly too?

David: It does not. Everybody ask me “Does it hover here in the museum.”

With all that is said The ETV is a stunning coupe in person. 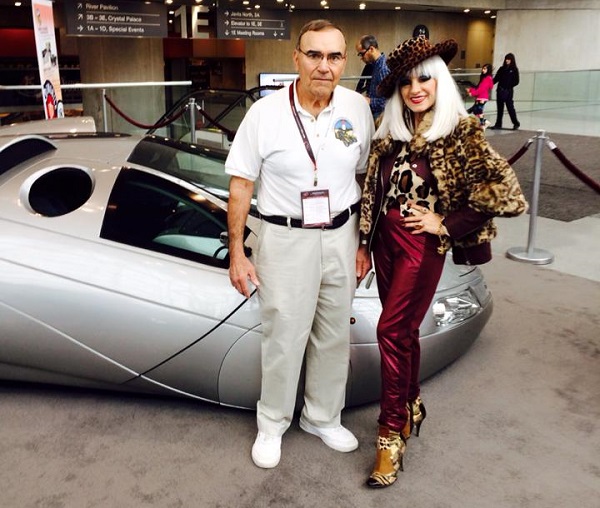 Members of the Vintage Automobile Club of Ocean County are working to establish New Jersey’s first antique automobile museum. Although there are museums and attractions throughout New Jersey that have a number of antique cars, there isn’t one true antique car museum in the entire state. The Vintage Automobile Museum of New Jersey’s goal is to provide a facility that will display, preserve and educate the public about the automobile and how it shaped the growth of this country. In the interim, the members of the organization have a “museum on wheels” that visits schools, health care facilities and public functions to provide these opportunities.

Another remarkable automobile was an exact replica of the Chitty Chitty Bang Bang Car that was seen in the 1960’s Film starring Dick Van Dyke. Entertainment Attorney and Activist Deborah A. Sable revealed the story behind why the owner, Mr. Garofolo, hand built this car. 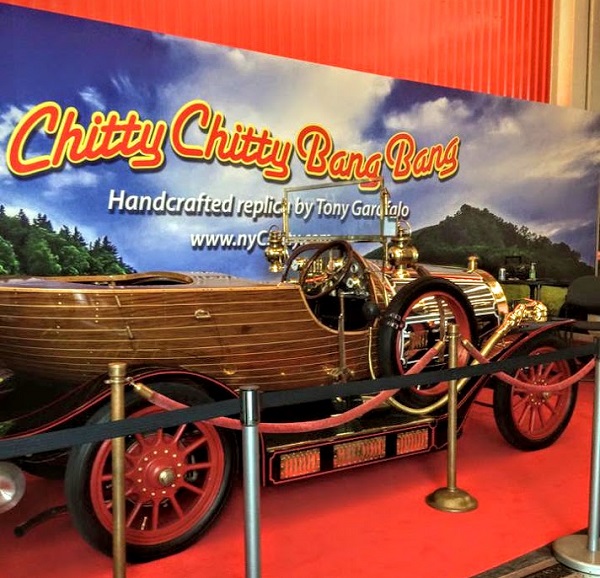 Cognac: Welcome back darlings, I am Cognac Wellerlane and I am here at the New York International Auto Show and I am here with Deborah an she is going to talk about this marvelous vehicle. It is an an exact replica of the Chitty Chitty Bang Bang Car that we saw in the movie.

Deborah: That’s right. It is an exact handmade replica. It was made by a gentleman by the name of Tony Garofolo, a retired NYPD detective sergeant 9/11 first responder and this was a labor of love for him. It was something he always wanted to do. It was just completed in June of 2015 and this is only the second time that the public has been able to see this car.

That is amazing. Now he is also a very famous musician as well. He plays with a band call Strawberry Fields. Is that correct?

Deborah: That is correct. He is John Lennon in Strawberry Fields. They play every Saturday at BB Kings right here in Times Square in New York City and you can catch him on Long Island at various fairs and festivals throughout the year.

Tell my audience about this car. How long did it actually take him to actually manufacture this car?

Deborah: It was a five year project. He started in 2010 and completed it last year.

This is really something. He saw this car many, many years ago. Explain to my audience the history of why he wanted to do this.

Deborah: Tony first saw this car when he saw the movie at its premiere at Radio City Musical Hall right here in New York City. His mother took him to the premiere and he was four years old.

Now how was he able to do that… go to a movie premiere at such a young age?

Deborah: His uncle worked for United Artist which is the production company that made the movie.

That is incredible. How lucky was he?

Deborah: You can imagine how magical it was for this little boy to see this car float and fly and rescue the family in the movie. His mother was recently divorced so it was just the two of them at the time and he told her that he was going to build this car and he actually did and it is magnificent.

I read somewhere that unfortunately she did not live long enough to see him complete the car.

Deborah: Yeah, tragically she passed away in 2005 which was the same year that Tony retired from the police force but I am certain that she knew her son well enough to know that one day he was going to complete that dream. 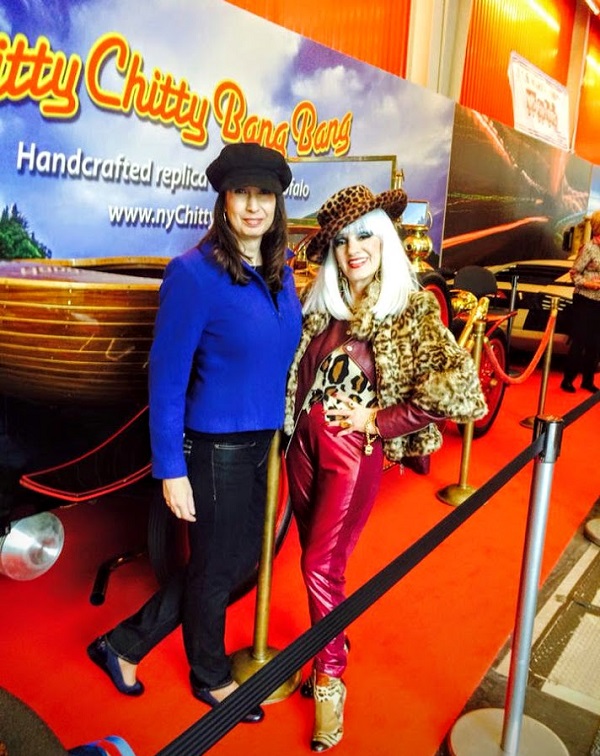 Deborah A. Sable and Cognac.

And sure enough Mr. Garofolo did complete the car which was exhibited at the 2016 New York International Auto Show at the Jacob Javits Center in Manhattan. The car was completed on June 30, 2015. The project took over 5 years to complete at a cost of over $100,000. The last finishing touch was installing retractable wings that fold out from under the car using two 12-volt actuators, just like in the film. Tony is continually asked; “does the car ﬂy?” Now he says, “Yes! Ha!!”