(Long Island, N.Y.) We all know I love the carnage, destruction, and oozing machismo of the 80’s Action film genre; I declare my devotion of this sweet art form at every opportunity when I write my movie reviews. So when The Expendables came out in 2010, an ensemble action/adventure flick combining noted action stars of both the 80’s, 90’s, and today, I was pretty sure that the pinnacle of human achievement had just been reached.

Alas, it was not to be. While at times fun in a base sense, The Expendables mostly reeked of disappointment. A sequel was eventually announced, but after beholding

the majesty of the incredible Indonesian ode to death that is The Raid: Redemption, I declared that, even if it did manage to improve on the lackluster original, The Expendables 2 could in no way clear the hurdle presented by The Raid; the mark had just been set too high.

Let’s cut to the chase: The Expendables 2

is MUCH better than the first one. It basically fixed everything that the original Expendables loused up. There’s no more fast edits/shaky camera during fights; they spread out the screen time amongst the various actors much more (the first movie was all Stallone and Statham, with the rest of the cast having what amounted to glorified cameos); the film flowed much better with no slow, boring scenes; the action was brutal and bloody; and it was much funnier.

Also, the story that tied everything together in The Expendables 2 was more basic and simplistic than the rambling mess of the original film; that simplicity allowed the plot to be more focused on advancing the action, rather than retarding it. The result is a film that is everything that the first Expendables should have been, and then some. 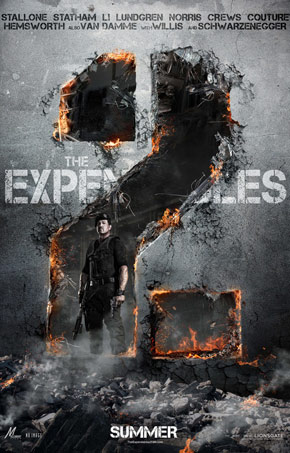 The Expendables 2 sees the entire cast from the first movie return (thankfully sans the useless character Mickey Rourke played): Sylvester Stallone, Jason Statham, Jet Li, Dolph Lundgren, Randy Couture, Terry Crews. Together, they are The Expendables, an elite band of mercenaries who, in this installment, are tasked with retrieving a mound of plutonium before a rival mercenary sells it on the black market. Blood and death ensures.

New to the line-up this time around are the future Mr. Miley Cyrus (AKA Liam Hemsworth), Chuck Norris, and Jean-Claude Van Damme. In addition, Bruce Willis and Arnold Schwarzenegger‘s cameos from the first movie are greatly expanded upon for the sequel. In particular, seeing Arnold back in action after all this time almost brought a tear to my eye. Okay, okay, I’ll stop lying- I wept openly at the sight of the Austrian Oak once again gloriously pumping lead into anything that moved. It was a beautiful sight. And the scene where Arnie, Sly, and Bruce team up to lay waste to terrorists inhabiting an airport was surreal. I mean, I couldn’t comprehend what I was seeing.

Van Damme made for an excellent villain and, despite not really being a Norris fan, I also enjoyed his part in the proceedings. The overall sense of nostalgia (which was mined liberally for some great self-referential humor) in The Expendables 2 was almost mind-blowing, if tempered a bit by the realization that these guys are, sadly, getting pretty damn old by this point. Note to Van Damme: you should have left those shades on, buddy.

My only real complaints were that some of the CG was horrible, like the helicopter in the opening battle (although the CG gore was actually pretty good). That, and I noticed a huge goof…the Expendables’ plane is shown having a cargo door in the back so the jet skis can board it, but when they cut out of wide shots, it’s a completely different kind of plane- not a cargo plane at all. Like, huh? Also, the Stallone vs. Van Damme fight was a bit of a disappointment.

And I know I was saying this movie would be crap compared to The Raid,

but in fact, it’s hard to compare them because they’re two totally different kinds of action movies. The Raid is an action masterpiece and an overall better film, to be sure, but The Expendables 2 excels at exactly what it set out to do (and what the original failed at): to be a fun and exciting homage to 80’s Action flicks.

Honestly, after the first movie my expectations were low going into this. I’m so happy with how well The Expendables 2 turned out…I felt warm and fuzzy pretty much the entire time I was watching it. I need to see this again, and I need The Expendables 3 with Wesley Snipes, Clint Eastwood, and Steven Seagal (even though he’s a great big fatty these days) ASAP, thank you very much.