(Long Island, N. Y.) You know, I’ve been all but begging Frenchman Luc Besson to get back to directing films after spending years simply writing and producing them. But now that he’s behind the camera again, I’m almost begging him to go back to being a producer again.

In his prime, Besson created some of my very

favorite films…The Professional (AKA Leon), The Fifth Element, The Messenger…all great films that conveyed an awesome sense of action, energy, ultra-quirky characterization, and humor. For a while, he took

generation of protégées such as Oliver Megaton and Pierre Morel. Okay, Megaton is as forgettable as they come, but Morel is a great talent; nonetheless I really started to miss the insane brilliance of Besson’s vision. His style has warts, yes, but it’s also brutally refreshing and unique.

Or at least it was…I know he’s put out a film or two recently that really only screened in Europe, but The Family, an action/comedy flick starring Robert De Niro, Michelle Pfeiffer, and Tommy Lee Jones, is his first foray into mass-market movie-making in quite some time, and unfortunately, it’s quite formulaic and, frankly, just not up to par with much of his earlier work. 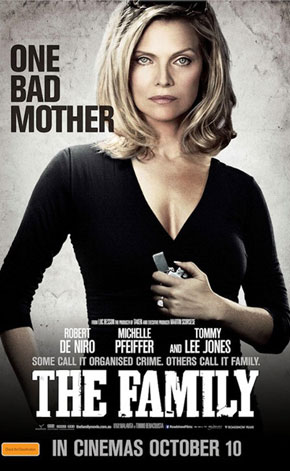 The setup for The Family is as generic as they come- it’s your typical “fish out of water” film where you know everyone will acclimate and get along in the end. Robert De Niro is Fred Blake, AKA Giovanni Manzoni, a mob snitch who has gone into witness protection with his family after a failed attempt on his life. After screwing up several of their last placements, Manzoni, along with his family – his wife Maggie (Michelle Pfeiffer), son Warren (John D’Leo), and daughter Belle (Dianna Agron) – are shipped off to a small town near Normandy, France, by the FBI agent handling their case, Robert Stansfield (Tommy Lee Jones, and hey! The name ‘Stansfield’ is an obvious reference to Gary Oldman’s character in Besson’s The Professional).

Once there, the family runs into conflict with the town’s inhabitants (the wife runs into snooty grocery store clerks and blows up the shop in retaliation while the son starts a mini-mafia at his school, for example) and are eventually discovered once again by hit-men

hired to kill them, and…well, that’s really all there is to it. It’s a fairly threadbare plot and while the action scenes are pretty much up to par with some of Besson’s better work, the humor and characters tend to fall flat more often than not.

The problem is that most of the characters are actually fairly unlikable at best and actually fairly loathsome at worst. It’s not really the fault of the actors; it’s just that they’re written that way, unfortunately. It isn’t helped that situations are introduced that radically shift the tone of the film, making it hard to laugh at some of the very black humor that pops up here and again throughout The Family. Don’t get me wrong- I LOVE black humor, but it’s a tough plot element to get right; it needs to be wielded like a surgeon’s scalpel, and instead Besson swings it like a hammer. In other words, it just doesn’t always work, but oddly, I’ve seen blacker humor succeed in other movies…maybe Besson is just rusty.

So, overall, The Family is disappointing but it does grant me my wish of the return of Luc Besson; now if I could only get the Luc Besson of 20 years ago; THEN I’d be happy. Perhaps I should have worded my wish more carefully.