(Long Island, N. Y.) I don’t like The Great Gatsby. I didn’t like it when I had to read F. Scott Fitzgerald’s 1925 novel in high school for a book report, and I don’t like Baz Luhrmann‘s 2013 film adaptation. I am clearly not the target audience for Gatsby, but I shall nonetheless do my best to review it in a fair and unbiased manner.

Honestly, how much you’re going to enjoy The Great Gatsby depends more on how you feel about the films of Baz Luhrmann then it does on how you feel about the source material. Luhrmann, despite attracting a large fan base and critical accolades, has earned himself a reputation in some circles as the ultimate style-over-substance director with his penchant for flashy, over-the-top spectacles highlighting visual and audio splendor at the expense of and shred of realistic character development.

And while I don’t entirely agree with that estimation (I do consider myself a fan of his 1996 Romeo and Juliet adaptation, mostly because it’s just plain crazy), I will say that such criticism does apply in this instance; while Gatsby is indeed a lavish, highly-kinetic film in line with Luhrmann’s other work, in this case it’s soulless, bloated, and ultimately, vapid.

The Fitzgerald novel (and thus, the film) takes place in the Roaring 1920’s and is told from the perspective of Nick Carraway, a depressed war vet, Yale grad, bond salesman, and drunk who rents a small home on Long Island in the made-up village of West Egg. Said home is situated in the shadow of the elaborate mansion of mysterious millionaire Jay Gatsby (Leonardo DiCaprio), a man who hosts numerous extravagant high-society parties in hopes of re-kindling a long-lost romance with the beautiful Daisy Buchanan (Carey Mulligan). 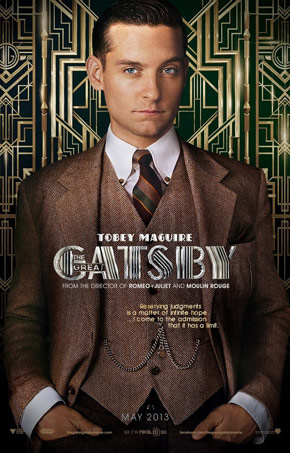 Despite Fitzgerald’s novel being considered somewhat of a flop in its day, with its author passing away believing that he was a failure, The Great Gatsby has nonetheless evolved over the years into what many decree a Great American Classic. Personally, I found it to be a bore and the characters un-relatable and, quite frankly, boring. Luhrmann’s movie takes this concept and runs with it, setting its narrative within the same time period (the 20’s), but awkwardly applying a modern, hip-hop sensibility (this expends to the editing and even the soundtrack) that just doesn’t work.

The story rolls quickly along yet plods frustratingly at the same time, since there’s nothing to it; the plot is threadbare and features a roster of characters that are empty and soulless. No one is likable, and no one has any real, recognizable arc of development or even a spark of personality. It’s just boring, despite all the fancy, quick editing and pretty production design that, admittedly, beautifully captures the era.

The cast backs up this critical failure with some rather poor performances, especially on the part of Tobey Maguire, who almost underplays his role to the point of being in a coma, and Carey Mulligan is cute but bland. The only thing that makes Gatsby worth watching is Leonardo DiCaprio, who is probably the most bankable star going these days. The guy’s talent and charisma is undeniable, and while I can’t say you should go and blow your hard-earned dough on this film based solely on his efforts, you can at least be sure that if you do, that Leo will deliver the goods.

Overall, The Great Gatsby…is not. If you’re a die-hard F. Scott Fitzgerald or Baz Luhrmann fan, sure, you’ll probably find things to like, but everyone else should steer clear.