(Long Island, N.Y.) The Grey was an oddity for me. According to the trailers, it was to continue star Liam Neeson‘s recent trek away from the dramatic roles that used to be his bread and butter and towards becoming the new Charles Bronson (which isn’t a bad thing, mind you). However, much to my surprise, the opposite rang true; while Neeson has been delighting me to no end with his new ascent to the throne of bloodthirsty, bad-ass action heroes (starting with 2008’s sadistic and masterful Taken), The Grey is a beautiful, gripping, and emotional character-driven drama with some moments of tense action thrown in. It’s seriously some of the most powerful acting I’ve seen Neeson do in years, and this is a man who always brings the goods, no matter what the role.

Yes, we’ve all see the trailer where Neeson’s character, lost and alone in the snowbound wilderness, tapes broken mini-booze bottles to his knuckles and tears off like Wolverine to take on a pack of ravenous wolves, but if you go into The Grey expecting that and nothing else, you’re not going to be happy. At its heart, this is a tale of survival against the odds and how a man who has lost the will to live can, when staring death in the face, find what actually matters about life and cling to it for all it’s worth.

The plot is simple, as it usually is with a great film: Neeson plays John Ottway, a loner who hunts wolves in Alaska that threaten an oil drilling team. Ottway is tortured by the fact that his wife has left him, and constantly goes all emo by writing her letters he never plans on mailing and toying with the idea of committing suicide.

After the job is complete, Ottway takes a plane home with his fellow oil workers in a blizzard. Sadly, the blizzard does its blizzard thing and causes the plane to crash, killing all but a handful of survivors, including Ottway, who quickly draws upon his experience in the wild and assumes command. However, the small group is cut off from the world, stuck in the middle of a snowy tundra, and even worse…they’re not alone. Besieged by a pack of vicious, territorial wolves, Ottway attempts to lead his companions back to civilization before they meet their doom either by starvation, exposure, or just plain being torn to shreds by the aforementioned four-legged fiends. Hard to say which alternative is worse, eh? 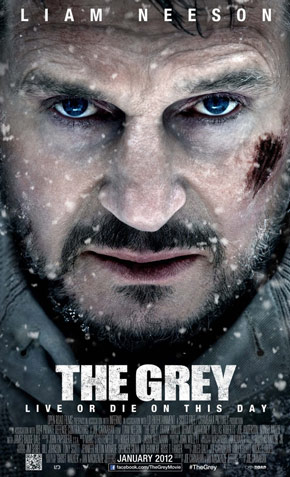 The Grey is powerful, and far more harrowing than most actual horror movies aspire to be in the sense that we have ourselves a small band of people trapped in a hopeless situation, and as they trod off to their inevitable doom, director Joe Carnahan has the audacity to actually present them as living, breathing human beings with personalities and not just cardboard caricatures to be killed off one by one. It’s not like we get a deep, introspective journey into each man’s past, but we are made to care about these characters, which make their uphill battle against nature all the more harrowing; the backdrop of the beautiful yet isolated Alaskan backwoods merely serves to enhance this even more.

Neeson in particular paints a tragic portrait of a man with nothing to live for who nonetheless rises to the challenge when all hope is lost. Throughout the film we get glimpses of the times he spent with his beloved wife; a childhood tainted by a strained relationship with a distant father; and his unbearable loneliness. Yet, it is this deep pain that he draws upon for the strength to keep on going, even when all is lost. There’s a scene where Neeson’s character is about as low as you can get, cursing the indifference of a God that he doesn’t believe in, and this scene gave me chills; it really cemented the fact that this man is one of our generation’s finest actors, either when testing himself against the elements or slaughtering degenerate criminals in the seedy underbelly of the streets of Paris.

Of course, an intense character study such as The Grey, even with Liam Neeson in the lead, needs a solid supporting cast, and standouts are Frank Grillo, Dermot Mulroney, and Dallas Roberts. Grillo’s character in particular stands out, starting out as a total jerk, which makes the eventual connection you might feel to him once you realize he’s an actual person with dashed hopes and dreams all the more poignant.

A lot of hoo-ha has been raised by bleeding heart types that The Grey is some sort of bizarre anti-wolf propaganda film; that these are wonderful, peaceful creatures that keep to themselves and never attack sweet, innocent humans, and so on. To that, I say hooey. I mean, that may be true, but really, who cares? Is Jaws in any way indicative of the behavior of real-life sharks? What about Anaconda? And let’s not forget the rats and bats in Vincent Price’s Dr. Phibes movies (man, that’s stretching it…not to mention really obscure)? There was a recent horror movie about a killer tire (yes, an actual killer tire that rolls around murdering people) called Rubber…where’s all the steel belted radial defenders? Most tires just sit there minding their own business, after all.

The point is: wolves may or may not act like this in real life, but as far as The Grey is concerned, IT’S A MOVIE. IT’S NOT REAL. And frankly, I can deal with a little negative wolf PR in exchange for such a fantastic movie. Besides, 97% of the wolf shots in The Grey are pure CG, so it’s not like real wolves were maligned in any way.

I was originally set to attend a second film after the screening of The Grey, but I found the film so emotionally exhausting that I had to skip the next movie simply to digest and recover from what I had just experienced. I honestly can’t remember that ever happening to me before – that’s the power of cinema in the hands of a talented filmmaker and an amazing cast, and why I love movies so much. Go see The Grey. Now.