(Long Island, N. Y.) Cop Buddy movies have been around for ages. Heck, they were a major staple of 1980’s action movie formula and have been around ever since. You know the deal- two police officers, typically polar opposites, are paired up and forced to become partners, hilarity ensues. Well, usually, anyway.

Of course, the two new partners hate each other at first, but soon they discover they have a lot more in common than they first thought, develop affection for one another, and before you know it, they’re teaming up to take on the bad guy in a bloody, testosterone-packed, no-holds barred shootout; the genre never deviates from this simple yet effective formula.

Until now, that is. You see, Cop Buddy movies have always involved dudes, but director, Paul Feig, who gave us the raunchy all-female comedy “Bridesmaids” in 2011, is back at it again with The Heat, and takes yet another style of movie normally dominated by men, and effectively turns it upside down by not just switching the gender roles, but with a few other unexpected twists on a well-worn formula as well. 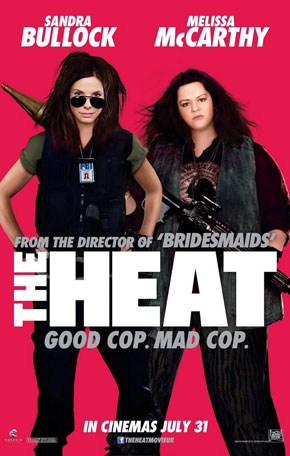 Boston police detective Shannon Mullins (Melissa McCarthy), the typical “loose cannon” who “plays by her own rules” but is kept on the force because she “gets results,” is forced to team up with straight-laced, by-the-book FBI Agent Sarah Ashburn (Sandra Bullock) to take on a mysterious drug lord. Clearly planning homage to the granddaddies of the genre, such as Lethal Weapon, the two couldn’t be more different, and of course they don’t get along. But if you’re thinking that The Heat is little more than just the usual guy-based 80’s action movie with females in the male roles, you’re in for a treat; it’s a lot more than just a re-tread with a slight twist.

Movies like this live and die on their leads; if they don’t have chemistry and aren’t likable, it’s all downhill and nothing can stop it. Hell, Cop Buddy movies don’t even need to have a decent bad guy to be successful, as long as the audience is into the lead characters. Thankfully, McCarthy and Bullock play off each other perfectly, and as a result, The Heat is pretty damn entertaining just in that respect alone. McCarthy is already typecast as a big, loud, butch gal, but honestly, that’s okay; there was a pretty distinct void for such a stereotype, and I’m sure she’ll have loads of success as (literally) the big fish in the small pond. The fact is, she’s a very funny lady and I hope we see more of her in the future.

As for Bullock, she has demonstrated a bit more range in her career, and seems to excel at a great many types of roles; comedy being one of them. She plays straight-laced and awkward pretty darn well, as evidenced by her role here, but later in the film (thanks to the prodding of her co-star) she gets to cut loose and actually gets pretty bad-ass. And, as mentioned earlier, she and McCarthy just click on-screen; I’d love to see this duo either make a sequel, or try out something else altogether.

There’s not much plot to speak of; The Heat focuses clearly on the characters and the laughs, which is fine. After all, can you clearly articulate the plot of ANY of the Lethal Weapon movies? I didn’t think so. You just remember Danny Glover and Mel Gibson clowning around. Oh, and lots and lots of violence, which is another thing The Heat has in droves, which sort of runs in contrast with the otherwise good-natured feel of the film. But that’s a minor distraction to what proves to be a very funny and entertaining film with a lot of fun, well-known actors in both big and small supporting roles, such as Jane Curtin, Michael Rapaport, and Marlon Wayans.

So, if you like your cops movies fast, funny, and loaded with estrogen, The Heat is for you. And even if estrogen isn’t your thing, I’d think twice about dismissing this movie; it delivers the goods, and then some…Danny and Mel would be proud.