(Long Island, N. Y.) I must preface this review of The Hobbit by pointing out that I am not a Lord of the Rings fan; this applies to both the cherished medieval fantasy novels written by J.R.R. Tolkien and the flashy film adaptations made by director Peter Jackson a few years back. I prefer my tales of swords and sorcery more Conan-like; it’s just a personal preference. But The Hobbit…that I have decisively more mixed feelings on.

I tried getting into the Lord of the Rings trilogy of novels a few times, but Tolkien’s droning, overly-detailed writing style layered with endless exposition…I just couldn’t hang with it. I apologize to Tolken fans, but I found the tales set in his imaginary realm of Middle-Earth unbearably boring. Jackson’s movies, in contrast, seemed more interested in cramming countless battles into every frame of film while forgetting to give us characters we gave a damn about; all flash and very little substance. I’m not sure which is worse.

However, I do have fond memories from my childhood of reading the Hobbit, which was the predecessor to the Rings series. It was a simpler, more child-friendly tome, and at a mere 400 pages, it had no choice but to get to the point quickly, maintaining a fun, fluid pace throughout. But, loyal readers, that was many, many years ago, and I have since moved on. So, imagine my horror when Peter Jackson announced that he was not only adapting The Hobbit, but adapting it into THREE MOVIES. Yes. THREE.

Now, please remember this is one very short, fairly simple book skewed more towards children. The idea of it being stretched into THREE films, each nearly three hours in length…I sensed doom. Filler and doom. Well, the first installment of The Hobbit trilogy is here, sub-titled “An Unexpected Journey,” and sadly, I’m pretty much proven right. 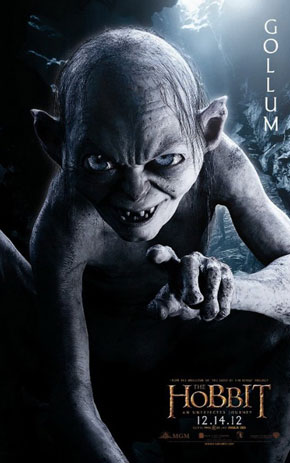 Set in the land of Middle-earth some sixty years before the main Lord of the Rings films, the Hobbit tells the tale of a hobbit (think- a little person played by a full-sized dude made to look small) Bilbo Baggins (Martin Freeman), who is hired by the wizard Gandalf (Ian McKellen) to accompany thirteen dwarves led by Thorin Oakenshield (Richard Armitage) on a quest across Middle-earth to reclaim the Lonely Mountain from Smaug the dragon.

Jackson seems to have reversed film-making gears, as his approach to The Hobbit (shown in 3D in select locations) is radically different than his approach to Lord of the Rings; whereas Rings glossed over a great deal of the story in favor or visuals and battles, The Hobbit instead appears to be a real-time conversion of almost each and every word from the book. In other words, Jackson comes across as padding the film with as much filler as humanly possible in order to stretch out something best served by a single film into three. It takes the movie at least an hour before it actually gets moving at all…a boring, agonizing hour filled with poop humor and all manner of silliness.

Yes, eventually The Hobbit gets on track and starts moving, with the last hour or so comprised of what felt like one long chase scene. I still never felt engaged, nor did I ever feel like I knew any of the characters (seemingly millions are introduced, but not fleshed out or made memorable in any way), but at least the experience had ceased being completely boring.

The visuals are a mixed bag. There’s lots and lots of CG in The Hobbit; the ratio of CG-to-live action is actually far higher than it was in the Rings movies. This is unfortunate, because Jackson chose to replace actors in makeup with CG beasts this time, and having your characters swinging their swords at invisible monsters that will be added in during post-production is never as good as having them fighting real people. The quality of the CG ranges from mind-blowing to PlayStation One quality. It’s an odd mix, and it makes me wonder why the quality was so inconsistent. I only saw the 24 frame-per-second version; I’m interested in seeing what the highly-touted 48 frame-per-second version looks like, since the higher frame rate is supposed to aid in the clarity of the 3D version, at the expense of making the film itself appear similar to camcorder footage in terms of movement.

I remember fairly little from the book, having read it when quite young, but one segment that remains firmly ingrained in my memory is the riddle contest between Bilbo and the creature known as Gollum in a dark, dank cave. It’s a tense, clever scene indeed, and it’s one that Jackson really managed to nail beautifully, portraying it as if he had reached into my subconscious and rendered it exactly as I had envisioned it so long ago.

But otherwise, The Hobbit ain’t so hot. I also remember enough of the book to know that there’s little of it left after An Unexpected Journey to support another TWO WHOLE MOVIES. Expect yet more filler to come, folks.

Now, uber-talented writer/director Guillermo Del Toro was originally going to be the one to give us the film version of The Hobbit, but the poor man ended up wasting something like a year or two of his life doing pre-production work on a film that eventually went on hiatus due to the parent studios’ financial troubles. By the time that mess was sorted out, Del Toro had wisely flown the coop; I can only wonder how much or little of his input remained when Jackson took over the project, or how much better the resulting film/s would have been. Despite not being a Tolkien fan, the idea of Tolkien filtered through Guillermo Del Toro is an intriguing idea indeed.

Unfortunately, instead of what could have been, we have what is; and what The Hobbit is, despite a few bright spots, is disappointing.