(Long Island, N.Y.) For me, The Hunger Games, the film adaptation of the popular “young adult” sci-fi novel by Suzanne Collins, is a failure on many levels. I can’t even say that its wasted potential, since any shred of potential it displays is blatantly ripped off from other, better movies.

At its heart, one could best describe The Hunger Games as a mish-mash of Battle Royale, The Running Man, La Cage aux Folles, and Twilight. Here’s the plot: mankind destroys itself in a war, then rebuilds into a perfect society called “Panem” where everyone is rich and dresses like drag queens. Outside the walls of this bizarre utopia are 12 districts where all the scrubs of humanity dwell, barely eking out a living. For the past 74 years, Panem has been holding an annual event called The Hunger Games, where two representatives from each of the 12 districts, ages 12 to 18, are randomly selected to compete in a contest where they are all basically turned out into the wilderness to fight to the death (just like in the Japanese film Battle Royale), while everyone watched on TV (just like in The Running Man). Why? Beats me…while the opening narration claims the contest keeps the districts content, no one outside of the wealthy kooks of Panem seems to enjoy the carnage involved in kids lopping each other’s heads off.

We are then introduced to Katniss Everdeen (Jennifer Lawrence), a teen girl who regularly sneaks out of her home district to bow hunt in order to feed her starving mother and younger sister. When her sister is chosen for the latest edition of The Hunger Games, Katniss volunteers to go in her place, something never done before in the history of the games. From there, Katniss is gathered with her fellow district combatants, given

2 weeks of basic combat/survival lessons for dummies, and turned loose against her peers. Who will win? Who will care? Not me, that’s for sure.

Honestly, even if extremely derivative, the story of The Hunger Games could have still managed to have been interesting if the writers had attempted to inject even one drop of depth into the script. When I can say, without a shadow of a doubt, that Arnold Schwarzenegger’s 80’s Action hit The Running Man possessed more thought and biting social commentary than The Hunger Games, you KNOW something’s wrong. Whereas The Running Man (which is awesome) featured a huge amount of satire on government cover-ups and mankind’s obsession with violence and entertainment, The Hunger Games just features an annoying subplot where all of its characters are obsessed with getting the idiotic residents of Panem to “like” them; it seems that getting people to “like” (and, in turn, sponsor) you offers some benefit during the contest, but it never amounts to anything whatsoever, aside from maybe a can of soup when painkillers and bandages would be more helpful. Nonetheless, we’re treated to stupid scenes where Katniss wonders how to achieve this likeability, only to be told that famous, time-honored movie cliché by her fashion designer (??) who dresses like Dennis Rodman circa 1997: “Just be yourself!”

The Running Man also featured rampant government propaganda to quell any uprisings in the public sector, and an ongoing, underground resistance movement determined to end the evil of the contest. In The Hunger Games, there’s none of this. The government does whatever they want, and the districts (and especially Katniss) just brainlessly go along without a single complaint (well, there IS one minor riot when one contestant is killed, but it’s really no big deal). Katniss seems more worried about getting people to “like” her and showing off her pretty fire-spewing dress (yes, she wears a dress that spews fire) than the injustices perpetrated upon the residents of the 12 districts, let alone doing anything even remotely subversive about it. I really fail to see why so many teenage girls love this dumb, generic character of Katniss.

Actually, it’s never even explained WHY the various districts tolerate The Hunger Games, or what the benefits are to the winners. Whereas the society depicted in The Running Man gathers together every week to watch their favorite program on giant outdoor television screens, cheering like maniacs and betting on the outcomes, the citizens in The Hunger Games…well, they ALSO gather together to watch the program on giant outdoor television screens, except without all the cheering and betting (actually, quite the opposite- most of them seem rather upset). Yes, novel author Suzanne Collins insists that she had never heard of films like Battle Royale and The Running Man before penning The Hunger Games, yet she somehow manages to lift whole scenes nearly intact from both of them. Odd. 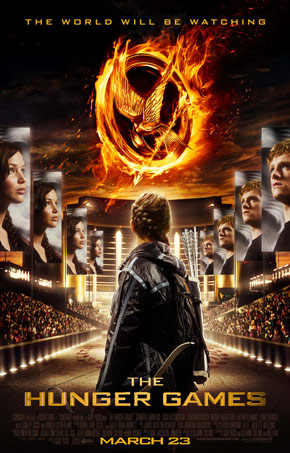 Another fact that’s never explained about the contest in The Hunger Games is why the ages of the contestants range from 12 through 18. I mean, within the scope of a competition, it makes absolutely no sense to expect a 12 year-old child, in any way whatsoever, to be able to take on an 18 year-old adult; I know I could CERTAINLY beat the living crap out of any 12 year-old that came along in MY neighborhood. It would make far more sense to have all the participants in The Hunger Games the same age; there’s no reason to include children…oh, wait, yes there is. If there weren’t cute, adorable, harmless little kiddies involved in the contest, you couldn’t artificially

generate a big, emotional scene involving one being killed off, because we all know that it’s especially upsetting when a child gets whacked in a story, isn’t it? Especially when the filmmakers chose the most beautiful, innocent-looking, kind-hearted actress they could find, right? It certainly beats having to actually write boring stuff like character development to get you to care about someone when they can just jam a spear through some soulless child model instead, huh?

Oh, and Woody Harrelson is in this, and plays his usual goofy self in a role where he’s supposed to be a previous victor of the games who coaches new Katniss. If that’s a draw or

a deterrent to seeing this movie depends solely on you and your views of Woody Harrelson. Oh, and did I mention that there’s a steamy love triangle between Katniss and two fellas from her district that’s sure to heat up in the sequels?

Hey…in all my ranting, I haven’t once mentioned the quality of the action scenes in this movie- they’re abysmal. Plagued by shaking cameras, fast cuts galore, and separated by long-boring stretches, The Hunger Game’s action scenes fail on a level equally matched by every other aspect of the film. This movie can’t even boast a villain half as devious and hateful as Richard Dawson was in The Running Man…all we get here is Donald Sutherland sleepwalking through his role and the kid from American Beauty sporting an (admittedly pretty cool) satanic beard.

In the end, The Hunger Games is a watered-down rip-off of far superior films. Its characters are developed less than a polio victim’s legs; its thoughts and ideas are poorly fleshed out and incomplete; and its action scenes are limp and weak and

there’s a near complete lack of humor in any form. A

friend of mine argued against these facts by wondering if a lot of the original book’s content was lost in the translation to the screen, until I countered that the author was one of the screenwriters as well. So much for that idea.

trying to desperately kick-start, and I’m having none of it. This movie sucks…which mean everyone will flock to see it, ensuring that the next two novels in the trilogy are filmed and become blockbusters as well. *sigh*