(Long Island, N. Y.) Arnold has returned. All is right with the world. With the action movie scene of today populated by wimps and wussies, it’s more apparent that the heyday of ruthless 80’s Action films is long gone. Sly Stallone dusting off his John

Rambo character for one last go-round a few years ago was good for some yucks, and The Expendables 1 and 2 were fun yet geriatric diversions that gave us a fleeting glimpse of the violent glory of once what was, but something…something was missing. Something vital.

Finally, the missing piece of the puzzle is back into place. After an eight-year hiatus while he ruled the far-off land of California with an iron fist, the Austrian Oak himself, Arnold Schwarzenegger, has returned to cinemas nationwide. Yes, he had extended cameos in The Expendables movies, but those were merely appetizers to the main course that is his first starring role since 2003: The Last Stand, a film that is not only noteworthy as Arnold’s comeback vehicle, but also as the American directorial debut of South Korean cult favorite Kim Ji-woon.

In the 1980’s, after having conquered the world of professional bodybuilding, Arnold turned his massive biceps toward the entertainment arena, and became the biggest Action movie star the world had ever seen. Arnold would go on to spill oceans of cinematic blood and

entrails in the ensuing years while carving out a vast legacy for himself, playing iconic characters such as The Terminator and Conan the Barbarian. For kicks he started doing the occasional family film, but it was to the realm of Action that he always returned; once again, he has done so, and done so in fine form. He may be getting on in years (he IS 65 now), but Arnold has proven that he can still kick ass with the best of them.

The Last Stand has a very simple plot: Arnold plays Sheriff Ray Owens, who, after spending years slaughtering scum while a member of the LAPD, is now enjoying the quiet life as guardian of the sleepy border town Sommerton Junction, Arizona, where instead of pumping lead into gang-bangers, he’s just dealing with the occasional drunkard or wayward sheep. 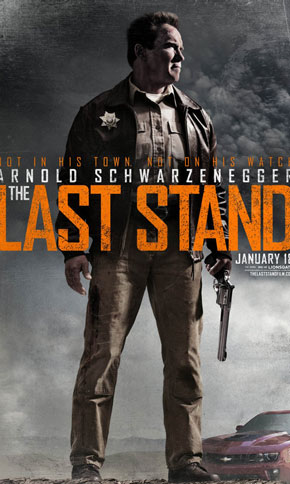 underlings make good his escape by hoisting the armored car he’s traveling in with a magnetic crane to the rooftop of a nearby building while Bannister and his fellow agents basically just sit there and watch. Blowing the scene in a modified and seemingly indestructible Chevrolet Corvette C6 ZR1, Cortez makes for the Mexican border, and his path will eventually take him right through Sommerton Junction…and on Sheriff Owens’ day off, no less.

With the FBI unable to send help until it’s too late, it’s up to Owens and his seemingly incompetent and unqualified deputies to try and stop Cortez. Unfortunately, the drug lord has planned for such a contingency; he has hired a small army of well-armed mercenaries to clear the way for his arrival in Sommerton Junction, but with access to the impressive weapon cache of local hick gun nut Lewis Dinkum (Jackass’ Johnny Knoxville), Sheriff Owens and his team are ready to dispense a little justice…and a whole lot of blood.

Holy cow, The Last Stand was great. It was fun, funny, the pacing was tight, and the action was pretty brutal at times. Kim Ji-woon’s direction was excellent, taking a film with a very simple plot and making it into more than the sum of its parts via style, a slow yet firm buildup to create tension, and slick cinematography. Overall, it was a very enjoyable comeback for the Austrian Oak…it was a good overall movie, and not just a good Arnold movie.

The Last Stand is different from usual Arnold fare now that he’s older…he doesn’t play a superhuman anymore, so the film feels a bit more grounded in reality than his old stuff. But that’s not a bad thing…it’s simply a natural progression for him as a movie star, and kudos to Arnold for understanding that. After all, if he still tried playing the invulnerable super butt-kicker these days it would probably just come across as embarrassing, like in the last few U.S.-made Jackie Chan movies where they had obvious stuntmen doing the stuff Jackie can’t pull off anymore in a sad attempt to preserve his daredevil legacy. Now THAT was bad.

However, Arnold’s jaunt into old age, while opening new aspects to his character work, was also a bit depressing, as you can tell the big guy really only has a couple of years left in the tank as far as making movies goes. Life is SO unfair…

Arnold’s acting was actually quite passable (especially compared to Expendables 2, where I thought he was pretty bad), and the movie effectively conveyed his advancing age while still allowing him to kick ass in a totally believable way. His supporting cast was good too- Johnny Knoxville was hilarious and (surprisingly) underused. I really got a kick out of his goofy character; any man who answers his door clutching a giant teddy bear is okay in my book. Forest Whitaker can do no wrong (Ghost Dog gives him a free pass for life in my book, so if he ever screws up a role in the future it won’t count), and Jaimie Alexander and Luis Guzmán as Arnold’s deputies both add solid and enjoyable touches to the proceedings. Eduardo Noriega was a pretty good villain, too.

The film isn’t perfect, of course. The Last Stand has a few action scenes that are pretty stupid, including one where Cortez destroys a SWAT truck by ramming it head-on with his Corvette, which only suffers maybe a few hundred dollars of damage to its paint-job in the exchange. Cortez’s escape scene is a bit ridiculous as well, as is the fact that a gas-guzzling Corvette can travel hundreds of miles without stopping once to fuel up. But these issues are all a part of that magical aspect of the movie-going experience known as “suspending disbelief.” It’s important to just enjoy a film for what it is, and The Last Stand is a fun popcorn movie, and as that, it succeeds wonderfully. It’s gritty, humorous, and exciting, and if you’re at all interested in such things in your films, then forget about the latest Channing Tatum piece of garbage and come witness a REAL action movie.

So, Arnold is back, and with several other projects in the works (including new Conan and Terminator films), it’s best for the entire world to enjoy his triumphant return for as long as possible. The end of an era is coming, folks, but at least Arnold is going out with a bang. Welcome back, big guy!