(Long Island, N. Y.) Hey, it’s a movie that no one asked for and it’s really not that good! Oh boy! As an adult, I have fleeting memories of The Lone Ranger, but honestly, I’m not sure from where. I don’t think I ever watched the show as a kid, as even then it was way before my time (the character debuted in 1933 in radio dramas before graduating to popular TV shows and movies). But I think everyone is at least vaguely familiar with the tale of the masked man riding into the sunset with his trusty Native American sidekick Tonto, dispensing justice in the Wild West one trademark silver bullet at a time (no, he didn’t fight werewolves…he just liked bling in his gun).

However, despite being a major part of American entertainment history, the character really hasn’t been relevant in quite some time. However, Hollywood, with its complete inability to create anything new, fresh, and interesting, instead mines its past once again and this time, decides to plunk down $250 large (as in MILLION) on a big-screen adaptation of The Lone Ranger, despite no one really caring. You could really feel the apathy of the American audience as Disney made the announcement of this project, and I wondered how a western period piece, no matter how extravagant, would possibly cost $250 million to make (The Good, The Bad, and The Ugly, one of the most epic westerns ever made, only cost $1.2 million…granted, that was back in 1966, but still); especially one with so little hype surrounding it.

Well, the new The Lone Ranger film is here, and it’s basically considered by many media analysts as a flop right out of the gate; starring Armie Hammer as The Ranger himself and Johnny Depp as Tonto, the film seems to have failed to attract audiences, who I hope have wised up and perhaps started valuing substance over computer-generated style and stupidity.

The film follows the origin tale of The Lone Ranger himself (Hammer), who starts out life as a Texas Ranger named John Reid whose brother is killed by the infamous outlaw Butch Cavendish and his gang. Oh, and John was “killed” as well, but he is “revived” by a scared white “spirit horse” named Silver (who becomes his trusty steed), and is informed by a mysterious Comanche named Tonto (Depp) that he has “been to the other side.” The two join forces to take down the bad guys, with Reid donning a mask at Tonto’s behest to conceal his identity (after all, he’s supposed to be dead, right?). 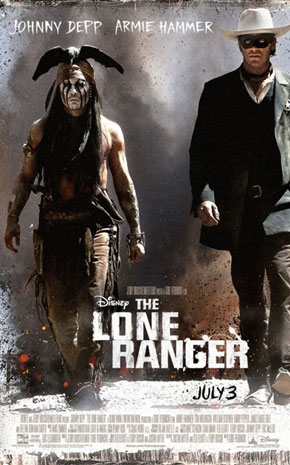 What follows is an overlong, drawn-out, semi-unfunny film that possesses no character or soul. It’s amusing here and there, and there are some pretty good action scenes (a train sequence near the end is probably the highlight…although it’s not without its own problems), but overall, this is a film that no one asked for, and a film that won’t win over the Ranger any modern fans.

Armie Hammer does a decent job…heck, he actually does a good job as the title character, combining his imposing frame with a tough-guy persona that works fairly well to introduce the ranger to modern audiences. It’s just a shame the film built around him couldn’t have been better, but if you were familiar with the troubled production history behind this movie (lots of budget issues, casting issues, script-re-writes, etc), it’s not really surprising that it’s uneven or sloppy. Helena Bonham Carter plays a brothel madam who aids our duo of The Ranger and Tonto and remains as annoying and unnecessary as she usually is in most of her recent film roles. Another review for this film stated that her role could be completely removed and The Lone Ranger not only wouldn’t miss her but the film overall would show improvement. I concur.

Of course, the big issue many people seem to have with the film is the casting of Depp as a Native American; personally, I find it barely one step up from a black-face minstrel show. There’s plenty of Native American actors out there looking for a break, and instead Disney decides to just paint Depp red and parade him out in front of audiences acting like a buffoon; his Tonto character amounts to little more than a pathetic attempt at comic relief while spouting forth stereotypical Native American mannerisms, and seriously serves to undercut Hammer’s otherwise solid portrayal as The Ranger at every turn. Depp is good at creating great, memorable characters, but this is one time where he’s seriously misfired…and in the most racially offensive way possible to boot.

So, I can’t really recommend The Lone Ranger. It’s overly long, dumb, and even fairly offensive

to an often-marginalized ethnic group. It’s a typical example of Hollywood’s recent obsession of digging up its past and defacing it with its modern style-over-substance policy, and an ugly sheen of CG video-game graphics draped over it for good measure. Skip it.