At The Movies: The Man with the Iron Fists

(Long Island, N. Y.) Well, we all know that I love action movies…because I tell you, my loyal readers, every single time I get a chance. And one subcategory of this amazing genre that I especially adore is that known as the Kung-Fu movie.

Born out of the fabled land of Hong Kong, the Kung Fu genre typically features masters of martial arts gifted with superhuman abilities who often battle to the death in matters of honor, revenge, and awesomeness. Eastern philosophy, acrobatics, wire work, complex fight choreography, absurd fantasy elements, the representation of multiple combat arts and weapons, goofy humor, and (of course) poor English dubbing only adds to the inherent, aforementioned awesomeness and elevates Kung Fu movies from escapist entertainment to a possibly life-altering experience.

Staten Island rappers the Wu-Tang Clan basically based their entire careers on the concepts and their love of the Kung-Fu movie, and the group’s leader, RZA, is achieving a lifelong ambition- he’s actually directed his very own cinematic homage to the films that shaped his life. Thus, I give to you today’s film review: The Man with the Iron Fists.

The longer review: RZA has crafted an excellent modern take on the classic Kung-Fu film, directing, co-writing, and starring in an ensemble picture that gathers together numerous Hollywood and Hong Kong players in a tale of vengeance and death.

RZA plays The Blacksmith, known far and wide for his skill at crafting deadly weapons. Living and working in Jungle Village in feudal China, The Blacksmith is forced to choose sides and join in with a conflict involving several distinct, warring factions, all of whom are vying for the emperor’s gold as well as The Blacksmith’s services as a weaponsmith. Constructing a set of deadly metal gauntlets, The Blacksmith becomes the eponymous “Man With the Iron Fists” and, with the help of some unlikely allies, sets out to defend his village.

The Man with the Iron Fists is a fascinating look at a novice filmmaker putting everything he has into his fledgling effort. Where the movie falters – its pacing is thrown off at one point by an unnecessary back story sequence for The Blacksmith’s character, and some of the editing is confusing – RZA’s raw passion and creativity more than takes up the slack. The Man with the Iron Fists is clearly a love letter to martial arts movies, and even it’s weaknesses harkens back to the very same warts that classic Kung Fu movies possessed in abundance; it can be argued that these very same warts, along with some great fight scenes, are what helped to make these films the quirky classics they were destined to become. 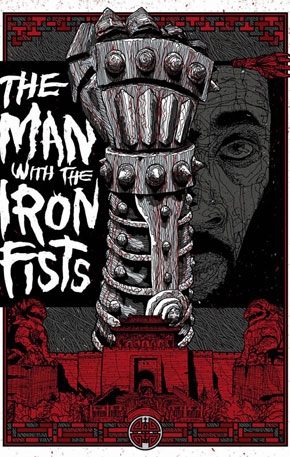 Bizarre weapons (iron gauntlets, spiked fans, twin Ying-Yang swords, but alas, no Flying Guillotine) and characters with outlandish abilities (a guy named Bronze Body can transform his body into…well, bronze) also help establish the film’s creativity and overall inspired style. CG graphics are integrated into more old-school Kung-Fu movie techniques, and all of this goodness is melded with a gritty urban sensibility. It’s loads of fun, warts and all.

The casting is equally unusual but effective, with RZA joined by such actors and actresses as Russell Crowe, Lucy Liu, David Bautista, Cung Le, Rick Yune, Byron Mann and Jamie Chung. Everyone involved seems to be having a good time with their roles; Crowe especially plays his part of a knife-wielding, opium-addicted British soldier in a hilariously awesome, over-the-top manner and instantly commands attention in any scene he’s in.

RZA, meanwhile, plays The Blacksmith in an unusually understated manner, which I found effective; the master of the Wu-Tang managed to convey controlled discipline and enlightenment in such a manner, the two most important ingredients for any true martial arts master.

The Man with the Iron Fists, while not perfect, is nonetheless a blast to watch, especially if you’re a fan of Kung-Fu films and offbeat action movies in general. It’s creative and bleeding passion for its subject matter, but to his credit, RZA doesn’t just produce a carbon copy of his favorite movies; he adds their distinctiveness to his own and creates a loving homage and a flawed yet effective hybrid. Personally, I can’t wait to watch how RZA’s film-making technique matures with his next feature.