(Long Island, N. Y.) Oh, it’s just so sad. Harry Potter is over. Twilight is over. And thus begins the mad scramble by every Hollywood movie studio in existence to appropriate every cheesy ‘tween’ book series in a bid to find a replacement

cash cow franchise. And, just like flops like The Host, Beautiful Creatures, and Percy Jackson, they’ve failed yet again with the subject of today’s review: The Mortal Instruments: City of Bones.

Take Wesley Snipes’ Blade movies, cross them with Twilight, add an extra dash of lameness, and you have The Mortal Instruments. It’s an insanely terrible film set in New York City involving the next Bella wannabe, Clary Fray (Lily Collins) who finds out that her mother is a “Shadowhunter,” AKA a demon hunter. When her mother is removed from the picture, Clary suddenly finds herself hunted by demons herself, but is rescued by the somewhat effeminate Jace Wayland (Jamie Campbell Bower), a man she had seen murder someone earlier.

Of course, this wasn’t a murder- turns out Jace is a Shadowhunter as well, and – surprise! – that was really a demon he had killed, not a human.

Clary discovers that, much like Harry Potter, she has inherited her mother’s abilities as a Shadowhunter, and begins to follow the predictable paths of A) being trained in the use of her powers, and B) falling in love with Jace. Ugh. 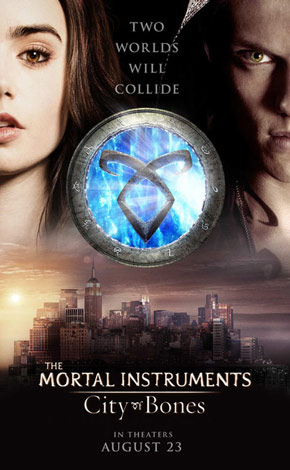 Anyway, it goes worse. The plot continues to devolve into toilet water when we find out that the forces of evil are after a “Mortal Instrument” called a

Mortal Cup, which allows humans to become human/angel hybrids. Or something. And there are witches and vampires and werewolves running around stinking up the script as well. It’s really derivative of every other tween fantasy fiction paperback clogging up the book-racks at Wal-Mart that are being gobbled up by little girls. It’s yet another example of a female author attempting to live out her dreams through her cooked-up little avatar and kids buying into it, and Hollywood buying into the fad in a desperate attempt to have lightning strike again. But, thankfully, moviegoers aren’t biting this time around.

The Mortal Instruments: City of Bones is boring. I actually tried me MAKE myself fall asleep halfway through in order to spare myself further boredom, but alas…I was wide awake the entire time, able to drink in every rotten detail. The acting was poor at best, the CG was poorly-done and ever-present, and the plot a mish-mash of a million other movies and a total mess. Characters are shallow, uninteresting and undeveloped; you don’t connect to or care about anyone on-screen at any time. It reeked of a film that was created solely by committee, focus-tested to death trying in vain to adhere to every cliché available to somehow manufacture another viable franchise to replace Potter and Twilight. It’s sad, like I said.

The Mortal Instruments: City of Bones flopped right out of the gate, so thankfully that means the plans for the proposed sequel are being scrapped as we speak.

We could only be so lucky if we’re spared another installment of the insipid Mortal Instruments series, believe me.