(Long Island, N.Y.) Man, I loved the Muppets as a kid. When I was little, birthdays usually consisted of my mom taking me and a bunch of my friends out to the movies, and then to Friendly’s for some ice cream…and one of the earliest memories I have of Win8Clave.com those great birthday outings is going to see The Muppet Movie. Jim Henson‘s magical puppet creations were a big part of my childhood, and while their importance to me waned as I grew older, I’ve never forgotten what made that one birthday movie so special those many years ago.

a while back, and in an effort to scrape the bottom of the barrel to cash in on his Muppet legacy, the dolts in charge

of his estate allowed horrible, soulless cash runs like “Muppets in Space” and “A Muppet Christmas Carol” to be made. Heck, if they had churned out “The Muppets Meet Adolph Hitler” I wouldn’t have been surprised, but thankfully, the damage was done, and the Muppets faded into history, never to be seen again.

Until now, that is. Yes, the Muppets are back, and believe it or not, someone finally took the time to try and get these memorable characters and the whole fun-loving innocent vibe of the Henson era correct, as opposed to simply thrusting Kermit and Miss Piggy into yet another
Windows 7 Clave awkward attempt to bilk the masses out of their

hard-earned dough by going the lazy route and milking nostalgia for all it’s worth.

Don’t get me wrong, however- there’s PLENTY of nostalgia going on here, but it’s the good kind, for the most part. How could there not be, when it concerns reviving the Muppet name? Anyway, the plot concerns a puppet named Walter and his human brother, Gary (Jason Segel). How they could possibly be related, I have no idea, but whatever. So, Walter dreams of being a Muppet, and when Gary takes his brother to visit the world-famous yet run-down and abandoned Muppet Theater (seems all the Muppets have gone their separate ways) while vacationing in Los Angeles with his girlfriend Mary (Amy Adams), Walter discovers a dastardly plot to sell the building for oil rights. 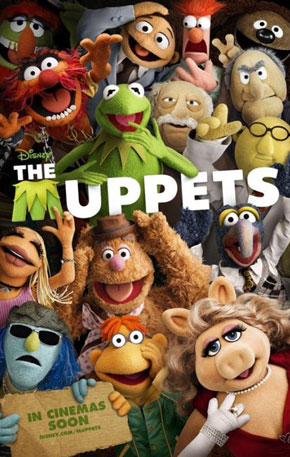 Feeling his true calling, Walter tracks down the mack daddy himself, Kermit the Frog, and together they decide to round up the rest of the Muppets to raise the 10 million dollars needed to save the theater. Along the way, in true Muppet fashion, they run into all manner of trials, tribulations, and silly celebrity cameos, all on the way to running a telethon to hopefully generate the small fortune needed to save the day.

I’m telling ya…they almost nailed it with this movie. Respectful of the Muppet legacy to a fault, “The Muppets” is funny, heartwarming and a great throwback to yesteryear when children’s movies had heart and personality instead of flash

and pop-culture jokes (not counting Pixar movies of course). Seeing the old Muppet gang back on the big screen really took me back, and the whole story involving Walter and his dream of becoming a full-fledged Muppet was rather inventive and well-done, although not as fleshed-out as it could have been. Jason Segel and Amy Adams made a great on-screen pair and fit perfectly into the proceedings.

And yet, I said “almost nailed it.” There’s something that feels a bit forced here…as if the filmmakers were trying a little TOO hard to emulate the Muppets of old, and it shows. Also, occasional modern shortcuts are taken with some of the puppetry (Muppetry?), which stands out rather glaringly as cheap and lame. I mean, remember when Kermit and Miss Piggy rode bikes together in The Great Muppet Caper? You actually saw them pedaling the bikes and everything was all done in live-action, right on-camera. To this day, I still have no idea how they did that, and it actually creeps me out a little. Jim Henson found a way to make

that happen…technical ingenuity, a pact with Satan, I don’t know how, but he did it. But in the new movie, there’s none of that lifelike wackiness present. In fact, there’s a scene where there’s a ton of Muppets on-screen together, and it’s obvious they were green screened separately and put together in post-production, which is disappointing. Henson would have found a way to do it for real.

Still, with Hollywood cannibalizing everything nowadays for the sake of nostalgia, the Muppets remains one of the few times it has been done with a bit of care and heart, and if there was ever one children’s franchise that deserved to be revived, it’s this one. Check it out if you’re a big kid, have little kids, or, best of all, both.