(Long Island, N.Y.) I love stop-motion animation. Just the sheer amount of effort and detail readily apparent in each and every painstakingly-crafted frame just fills me with awe. And the currently kings of the hill when it comes to stop-motion are the delightful Brits of Aardman Animations, makers of the godly Wallace and Gromit series.

Starting out with various short films (their earlier offerings being Creature Comforts and, of course, Wallace and Gromit), Aardman later branched out into feature films, and efforts such as Chicken Run and Wallace and Gromit: The Curse of the Were-Rabbit were given a massive boost in terms of budget and animation complexity, truly creating memorable and amazing visual spectacles.

Of course, it didn’t hurt that Aardman’s works weren’t just pretty; their ability to tell fun, quirky, and exciting tales punctuated with dry wit and humor that appeals to both kids and adults put the company on the map just as much as their distinctive animation and character design style did, in addition to their ability to attract top voice talent.

This brings us to their latest film- The Pirates! Band of Misfits (released in Europe as The Pirates! In an Adventure with Scientists). The tale is a simple one: in the year 1837, The Pirate Captain (Hugh Grant in a really impressive vocal performance…I really couldn’t tell it was him), who is a…well, a pirate captain, is determined to win the annual Pirate of the Year competition, Robes de bal courte the winner being whoever can plunder the most booty. It’s a competition that The Pirate Captain has lost every year, but with the help of his goofy band of pirates, he plans on taking the gold off of each and every ship he can find. 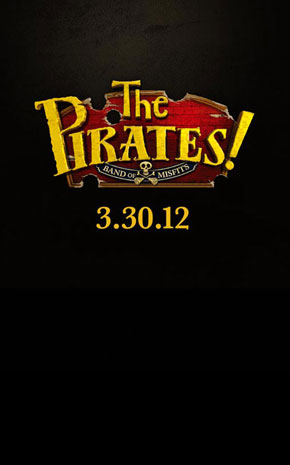 However, The Pirate Captain is, in fact, poorly named, because every ship he and his merry band attack has anything BUT gold aboard. Ridiculed by his peers (especially because his wanted posters offer a “free pen” as a reward), The Pirate Captain is ready to throw in the towel when they come across Charles Darwin (David Tennant- hey, it’s 11th The Doctor!), who points out that a member of the Captain’s crew is, in fact, a valuable scientific find! Determined to win a prestigious science contest in London with this new-found information, The Pirate Captain figures that the assumed prize money will, in turn, win him the Pirate of the Year competition. But things go wrong in the worst possible way, and soon the Captain loses everything. However, determined to set things right, The Pirate Captain sets out to confront the evil Queen Victoria of England, and well…hijinks ensue. You’ll have to see the rest for the outcome, of course.

Aardman’s latest is a bit of a mixed bag, and it pains me to say that, considering the massive respect and love I have for their work. Visually, they deliver…each scene is filled to the brim with beautifully animated characters and complex and breathtaking background environments. The environments are so detailed, in fact, that when the eventual DVD comes out, I know I’ll be wearing out the pause button to catch every odd reference and in-joke plastered about by Aardman’s design staff. This film is truly a work of art.

Some CG is mixed in with the traditional hand-animated stuff, but it’s not overly intrusive, and honestly, I don’t see how they could have done the CG elements differently.

Likewise, the cast also delivers…as already mentioned Hugh Grant does an amazing job, as does his supporting cast, made up of many great actors such as Martin Freeman, David Tennant, Salma Hayek, Jeremy Piven, Brian Blessed (Vultan!), and Anton Yelchin (among many more). Everyone imbues their character with a load of distinct personality and everyone seems to be having fun with their roles.

So, what’s the problem with The Pirates! Band of Misfits? Well…first off, it’s not quite as funny or as clever as the usual Aardman outing. It’s hard to explain, but something just seemed off. The humor just wasn’t quite as inspired as in past Aardman movies and shorts. That’s not to say that I didn’t laugh…in fact, I did. Quite a bit in fact. But, while watching, I was also aware of the fact that I wasn’t laughing as much as I expected, or hoped to.

But the main problem with The Pirates! Is the fact that the plot is, shall we say, very well-worn and uncreative, which is a shocker considering that this is a company that once made a movie about a man who turned into a giant, carrot-eating rabbit monster under a full moon. Whoever wrote the script for The Pirates! was clearly a student of Film Progression 101: there are no twists, turns or surprises, and everything turns out exactly as you’d expect, and exactly as you’ve seen before in 1000 similar movies. It’s a shame for Aardman to make such a clichéd, Hollywood-style movie after eschewing those conventions in so many of their previous efforts.

But, in the end, even an average Aardman offering is better than 99.9999999% of the junk clogging up movie theaters these days, so I will still recommend it to anyone looking for a few laughs and loads of personality. The Pirates! Band of Misfits, despite not being a great Aardman film, is nonetheless still very good and well worth experiencing.