(Long Island, N.Y.) Aw, no…not ANOTHER demonic possession movie that’s “based on true events.” I…I can’t take it anymore! They’re all really starting to blur into one big indistinguishable mess of film after film, each one looking, sounding, and acting the same as the one that came before it.

The Possession (even the name is generic) is the latest of these assembly line flicks. Directed by Ole Bornedal and co-produced by Sam Raimi (whose name when it comes to horror isn’t as revered as it used to be), this movie pretty much hits all the usual creepy clichés like clockwork, albeit with one deviation from the norm: the addition of a strange old box that helps to give a slight aura of mystery to the proceedings. A few better-than-average acting jobs by the cast members also help to elevate The Possession above the level of similar fare clogging the toilets of the film industry these days, but make no mistake; this movie is decisively “eh.”

Okay, quickie plot recap time: Clyde (Jeffrey Dean Morgan) and Stephanie Brenek (Kyra Sedgwick) get divorced, and start doing the usual shuffling of the kids, Em (Natasha Calis) and Hannah (Madison Davenport), between mommy’s house during the week and daddy’s house on the weekend. One weekend, Clyde, being the Earth-shatteringly exciting parent that he is, takes the kids to a yard sale. Apparently, its H.P. Lovecraft’s yard sale, since Em finds a creepy box for sale engraved with Hebrew inscriptions, and, of course, she just HAS to have it. Already, we know this box can mean nothing good for our protagonists. 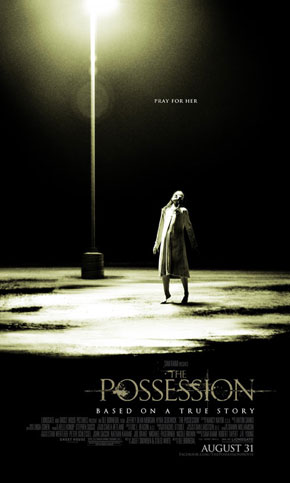 And, wouldn’t you know it, Em starts acting all weird once daddy buys her that box! Soon, it’s clear that something has become quite wrong with the lass, and it’s obvious that her wonderful new box has something to do with it. Is the box a conduit for demons eager to devour Em’s soul? Or is something even worse going on (really, what could be worse than that)?

The only thing The Possession has going for it is the rather touching relationship between Clyde and his daughter, Em. Thanks to the acting talents of Jeffrey Dean Morgan and Natasha

Calis, abilities that deserve to be in a better film than this one, you actually find yourself invested in the plight of this father and daughter. Their relationship is actually rather endearing, and it’s rare, especially in a cheapie, by-the-numbers horror movie, to find any one character you actually care about, let alone two. Any tension or foreboding The Possession manages to generate while you’re watching it can be attributed solely to the performances of Morgan and Calis.

Not wanting the audience to get too much of a good thing, Clyde’s other daughter and his ex-wife pull you back to reality with their bland and unimportant characters. Also in abundance are lots and lots of predictable plot points and boundless horror movie clichés that have been done to death in parodies, including the ever-reliable (read as: predictable) “jump scare.” You know, it’s quiet, the music blares out of nowhere, a book falls on the floor, and…ha! Fooled you! It’s nothing. I hate those…it’s a cheap, no-talent filmmaker’s trick. I know that even the greats have fallen back upon them from time to time, such as John Carpenter during his zenith, but since he always packed in a plethora of genuine scares as well, it’s easily forgiven. Not so in The Possession’s case…director Ole Bornedal just ain’t in the same league.

Oh, and the film’s marketing department isn’t helping matters, either, since several of The Possession’s big scares were stupidly spoiled by the trailer. It’s not as bad as Quarantine, a 2008 horror movie whose ENDING was spoiled not only by the trailer, but by the lobby poster as well, but it’s bad. What is wrong with these marketing types, anyway?

The Possession is a cheap, gimmicky, middle-of-the-road horror flick that you’ve already seen 20,000 times before. If it wasn’t for the real human drama brought into it by the performances of Morgan and Calis I’d say give it a pass, but if you’re dying for a horror movie fix and want to feel the frustration of seeing two actors give it their all in roles that really don’t deserve it (it might be kinder to say that their roles help to elevate a so-so movie to a level higher than it would have been otherwise), then check The Possession out. Just don’t expect much and you might even be mildly entertained.