(Long Island, N. Y.) The Purge is a wacky movie that holds an interesting yet not fully-developed premise within its cinematic boundaries. It kinda reminds me, a tiny bit, of the old-school Star Trek episode “Return of the Archons” where this computer controlled an entire society with an iron grip but let everyone cut loose and go crazy at 6pm every day. The amount of sudden violence and debauchery

on display during this period, known as “The Red Hour,” was enough even to surprise the hedonistic Captain Kirk himself, if you can believe that.

The Purge, set in the year 2022, takes that basic idea, but instead of a computer, we have the “New Founding Fathers of America” who operate under a regime of strict law and order; but, one day a year, they allow everyone to go all “Return of the Archons” for a 12 hour time span. During this time, people can pretty much run

wild and do whatever they want – kill, maim, rape, whatever – as long as they don’t harm “Level 10” government officials and use weapons above “Class 4” (fun stuff such as assault rifles and automatic shotguns).

Apparently the steam that The Purge allows the populace to let off somehow manages to keep the lid on crime the rest of the year, in addition to helping unemployment hit one percent. And the people who don’t want to run around from 7pm to 7am making like Jason Voorhees? They have to lock themselves up in their homes and hope no one can get in.

That’s where James Sandin (Ethan Hawke) comes in. He and his family (played by Lena Headey, Adelaide Kane, and Max Burkholder) decide to be spoilsports and sit out on the carnage, barricading themselves in his secure, well-to-do house (he’s a successful security developer, which comes in handy at times like this). When things go to hell, he just sits back and watches it all unfold on the surveillance cameras he has set up outside. It’s not pleasant, but at least he and his kin are safe. 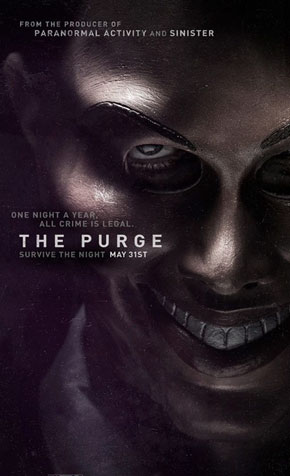 Until they’re suddenly not, that is.

Between Sandin’s daughter, whose unbalanced and potentially dangerous boyfriend has locked himself in the house, and Sandin’s own merciful yet unfortunate decision to let a man in from the outside who had been beaten near to death (and, as a result of his interference, gaining the retribution of the vicious gang pursuing the stranger), things go south rather quickly, and soon it becomes readily apparent that none of the Sandin family may live to see another Purge again.

Overall, The Purge is a fairly tense and exciting flick at times, but it’s not without its share of issues that cause it to fall just short of the mark. The idea of The Purge itself honestly reeks of “forced gimmick,” but it’s presented seriously enough here that it’s possible to suspend disbelief and just go with the flow; the Sandin family even sits down at one point to discuss The Purge and why it’s important for the sake of their

society (luckily for those watching, they chose this

year’s Purge to present this ethical exposition and debate for the audience, as I can’t imagine they go through this same discussion every single year).

Besides, when you look at it, the premise is really no sillier than other near-future films such as The Running Man, which is awesome. The Purge is NOT awesome, however, but it’s not bad, either. But I digress. Or do I? I’m not sure.

Unfortunately, while there are scenes in The Purge that are somewhat nail-biting (the stand-off with the gang that wants their victim back are an example), the film ultimately falls into the clichés of the standard “home invasion” genre that we’ve seen done time and time again. It’s well-done, but nonetheless feels very familiar, and as a result, the atmosphere of dread and suspense the filmmakers were going for is diluted; you see every punch and twist pretty much coming, and nothing happens that surprises you. And, so per the norm of horror-themed movies, people just do the dumbest things imaginable; they have to, otherwise there would be no movie. Annoying, but sadly true; and it will remain so until Hollywood finally breaks down and gets

Otherwise, The Purge is pretty decent. The acting is there, the pace is solid, and the premise, while goofy and carried out in a somewhat predictable manner, is still enough to provide a few base thrills. So, if you’ve already seen all the big summer movies so far, then I guess it wouldn’t hurt to check out The Purge, especially if you’re a fan of thrillers with a horror/sci-fi edge to them (and really, who isn’t?).