Yes, although we American proudly produced the finest examples of celluloid bloodletting and dismemberment known to mankind in the glory days of the 1980’s, since then big-budget Hollywood studios have been watering down their product, adding in unnecessary things like sub-plots, merciful heroes that have consciences and feelings, and – worst of all – lulls in the dealing of death and destruction that sometimes can last 20 minutes or more of running time. In the spirit of 80’s Action Movies, these are crimes of the highest order.

However, various foreign-made action flicks have been taking up the slack in terms of utter violence and ruthlessness…the most recent examples have been French director Pierre Morel with his amazing one-two punch of Taken and From Paris With Love, who films with protagonists that not only match the vicious stars of 80’s bloodletting in terms of ruthlessness, but in some ways even EXCEEDED them.

And now, the king of them all has surfaced…and from the most unlikely of places- Indonesia. Yes, an Indonesian action film, exclusively starring Indonesians, and made by a Welsh director. Ladies and Gentlemen, I give you the new king of modern action films- The Raid: Redemption. It has almost no plot. It has almost no dialogue. No comical sidekicks. No heroes that launch into deep, introspective looks into their soul about all the killing they’ve been doing. 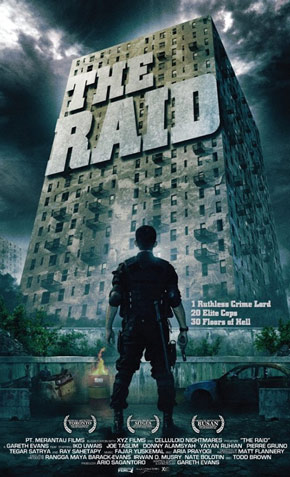 What is does have is action. A beautiful, bone-breaking, non-stop dance of death that starts about maybe 5 minutes into the film and doesn’t really let up until the end credits. There might be one or two scenes where people take a break to talk for a few seconds, but that’s only so the audience doesn’t go into cardiac arrest. I mean, there’s only so much excitement we can take, and The Raid: Redemption just about finds our limits for such an experience.

Okay, the plot, such as it is, goes like this: SWAT team invades a 15-story building belonging to bad guys, fighting their way up, floor-by-floor. That’s it. Seriously. And I know you’re thinking that’s pretty thin, even for an action movie, aren’t you? How can that possibly fuel an entire movie? Trust me, it does; there’s not a boring second in The Raid: Redemption. Not one.

The Raid (the word “Redemption” was added to the American release for some copyright reason) stars actor Iko Uwais and highlights an Indonesian martial art known as Pencak Silat, which seems in many ways similar to Muay Thai, but perhaps even faster and with even more emphasis on offense. The movie (which is subtitled in English) starts out with typical gunplay as the SWAT team breaches the building and begins securing it one floor at a time on their way to get to the main boss at the top floor, just like in a videogame.

But things aren’t what they first seem- the situation quickly spirals out of control and the bad guys get the upper hand, and soon guns are eschewed in favor of brutal hand-to-hand combat in scenes that are inventive, brutal, masterfully choreographed, expertly filmed and edited, and insanely intense. Honestly, I can’t remember the last time a movie literally almost had me out of breath. Watching this The Raid is good cardio!

And yet, even with all the violence, the film still manages to have likable characters…well, the few that survive, anyway. Iko Uwais plays a member of the SWAT team who has a pregnant wife at home, and…well, we don’t really care about that. He only really becomes engaging when he’s jamming people’s necks through broken door frames. And DAMN, is he good at it.

And yes, your eyes aren’t deceiving you- I have given The Raid my coveted 4-star rating, something that, out of nearly 200 Long Island Exchange movie reviews, I’ve only given to one other movie: Stephen King’s The Mist (although, in retrospect, I should have given that one three-and-a-half…WALL-E, on the other hand, deserved four, but didn’t get it at the time. Ah, hindsight). Bear in mind, however, I’m giving it four stars based SOLELY on its merits as an action movie…if you’re not a fan of the genre, subtract maybe a star or two, depending on your tolerance for blistering death.

Seriously, forget the upcoming Expendables 2. There’s no way it can compare to The Raid, even with Arnold getting out of his rocking chair for one last go at recapturing his bloody 80’s nostalgia
before retirement. Purely from an action standpoint, The Raid: Redemption is the best movie I’ve seen in years. If you even have a passing interest in action/martial arts movies, this is an absolute must-see.