(Long Island, N.Y.) The Watch is an ensemble sci-fi/comedy film starring Ben Stiller, Vince Vaughn, Jonah Hill, and Richard Ayoade as suburbanites who form a neighborhood watch group and end up taking on outer-space alien invaders who threaten the planet. Yes, that’s really the plot. I don’t normally get that out of the way in the first paragraph of my reviews, but that’s what happens when you write on the fly like I tend to do. I’m unpredictable, folks!

So, I already described the plot, but how’s the experience of watching The Watch (that sounds odd…)? It’s actually pretty okay. While The Watch isn’t going to endure throughout the years as a comedy classic, it’s an amusing way to kill about an hour and forty minutes. The laughs, which come at an adequate and sustained pace, mostly consist of verbal gross-out humor. In other words, the characters say lots of obscene stuff. If that’s your thing, and I’m ashamed to admit that it’s mine, then you’ll find entertainment here.

But you won’t find LOADS of entertainment, mind you…The Watch doesn’t get by on razor-sharp wit or cleverly set-up punchlines; it’s just a race among the characters to see who can say the most outrageous potty-mouthed quips before the end credits run, a comedy element that’s becoming somewhat overplayed in today’s film market. But hey, it works, although not as often as it should considering The Watch’s cast; the jokes miss almost as often as they hit.

Speaking of the cast, Stiller, Vaughn, Hill, and Ayoade all share some pretty decent chemistry with one another, which is why I suppose the hit-or-miss humor was more tolerable than it might have otherwise been. It also made the premise of an alien invasion easier to buy into…or at least easier to not mind. 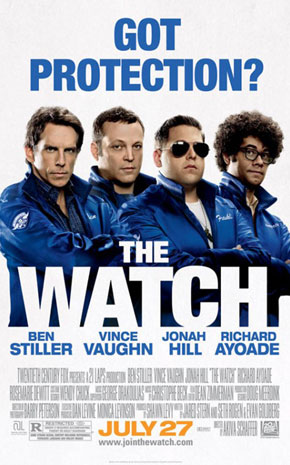 Oh yeah, the aliens…I might as well talk about them. Stiller’s character, Evan, is a manager of a local Costco and one night his friend, a security guard, is murdered by one of the aforementioned creatures. Yes, it seems that the alien invaders have holed up in Costco because, as one of them confides later in the film, “The place is great, it has everything that

we need.” Of course, the murder is chalked up to a human assailant, despite the dismembered corpse being covered with strange green goo.

By the way, the invaders look kinda like the monster from Ridley Scott’s Alien (well, not really), only not as cool, and their sole weakness is…well, I won’t spoil it, other than to say that it’s a typical weakness 99.999% of human men share with them. Yes, myself included, sadly.

So Evan, ever an active, annoying, nonstop participant in his community, decides to further neglect his wife Abby (Rosemarie DeWitt) by starting a neighborhood watch to find the killer and bring him to justice. But what he and his friends discover instead is a possible “Invasion of the Body-snatchers” scenario with the fate of the planet hanging in the balance. Good thing the gang has found a mysterious extraterrestrial bowling ball whose energy blasts can level entire

So, that’s really it. Yeah, there’s some interpersonal strife among our four leads, and Stiller’s character has to hash stuff out with his miserable wife, but in the end there’s personal growth and lessons to be learned…or, at least, what marginally passes as character development in a film such as this. Really, it’s stupid to expect more than that.

Stiller and Vaughn’s roles aren’t much of a stretch for either man; they both play to established type, with Stiller being a neurotic weirdo and Vaughn being a motormouth. I know nothing about Ayoade so his shtick is new to me, and I found him to be rather amusing. But the best part about the movie is Hill, who is starting to show more range (well, a little, anyway) than anyone would have ever expected out of the guy when he first showed up in Superbad a few years ago. He and Will Forte as a bumbling police sergeant kinda steal the movie, and my buddy R. Lee Ermey pops up in a fun little cameo as well.

So, The Watch is a fun if unexceptional little movie that will entertain if you have a rather unsophisticated sense of humor (guilty!) and need a break from repeat viewings of The Dark Knight Rises (guilty again!). Check it out, but be sure to set your expectations low.