(Long Island, N. Y.) I gave 2009’s X-Men Origins: Wolverine a good review. I was wrong- in hindsight, it was actually pretty bad. I screwed up…I can admit that. It doesn’t happen with me often, but I think everyone has at least one or two movies under their belt that they’ve flipped on after initially liking for whatever reason… temporary insanity, whatever.

It doesn’t mean that X-Men Origins: Wolverine is a BAD movie, per se…it’s just a cheesy, cliché-ridden mess with a storyline filled with plot holes, inconsistencies, and just plain silliness. It also botches the portrayal of several fan-favorite characters, which ticked a lot of people off as well.

Nonetheless, it was successful at the box office, but expectations were low for a sequel. Luckily, the newest installment in the X-Men series, simply entitled The Wolverine, is a major step up from its predecessor…although it’s not without its problems. But wait…who the heck is Wolverine, you ask? Geez, what’s wrong with you? Well, okay…I’ll school you.

Wolverine, AKA Logan, is a mutant born with enhanced regenerative abilities that enable him to rapidly recover from almost any wound or disease (as well as granting him virtual immortality, both a blessing and a curse), enhanced animal senses, retractable, foot-long, razor-sharp claws housed in his forearms, and a skeleton bonded with an indestructible metal called adamantium. A member of the X-Men, a group of super-powered mutants banded together to help protect a world that hates and fears them, Wolverine has become one of the most popular funny-book characters around over the years

Played by Hugh Jackman after pounding down 6,000 calories a day and living in the gym every minute for the past few months, Wolverine is a jacked berserker oozing with muscles and veins and striations and actually looks

pretty freaky, especially when he’s slashing stuff with his claws while screaming at the top of his lungs. But Jackman is actually a talented actor, and manages to bring one of the comic world’s most complex and nuanced characters to life with a superb performance; Logan’s rage and anger are tempered with a world-weariness in this installment and the need to find something new to give his life meaning after living untold lifetimes due to his mutation. 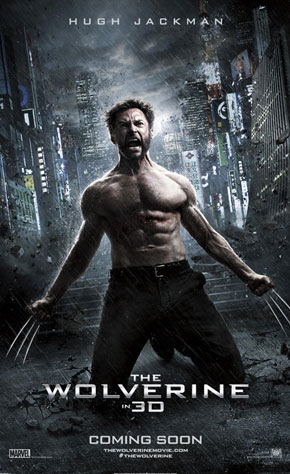 The Wolverine is yet another solo effort that takes place after the last X-Men film, The Last Stand (which was pretty bad, falling short of the high-water mark set by the great X1 and X2), and it finds Logan living as a homeless bum in the woods, traumatized after the tragic loss of the love of his live and the breakup of the X-Men team. However, his past comes calling as a former Japanese solider that he saved during World War 2 (like I said, Logan is basically immortal) calls upon his one-time savior while on his deathbed, wishing to bid him farewell. Flying to Japan, Logan soon discovers a deceptive plot to strip him of his powers and, weakened and diminished for the first time in his life due to mysterious circumstances, he finds himself fighting Yakuza, Ninja, and his own painful past that he can’t escape.

I actually thought The Wolverine was really good. I really dug the whole Japanese aspect, with its effective mix of modern and traditional aesthetics. It was slightly unconventional for a superhero movie, with its slower pace sprinkled with intense action scenes and character-building moments, and ran rather contrary to the average summer blockbuster.

I also enjoyed that they reduced Logan’s healing factor drastically due to a certain plot device…it made him a far more compelling and interesting character when he could be hurt and was walking around all injured and shot up and a gang of normal dudes could actually give him trouble for once. I mean, it gets boring when he’s totally invincible all of the time and can regenerate.

The characters in The Wolverine are also pretty cool, and were a big part of my enjoyment of it. While Tao Okamoto, who plays Logan’s love interest Mariko Yashida, is solid but ultimately somewhat bland, a big standout for me was Rila Fukushima as Yukio, a spunky mutant with fortune-telling powers and slick martial arts skills who ends up as a sidekick of sorts to Logan. I also liked Svetlana Khodchenkova as Viper, one of the film’s main baddies; she has an astonishingly evil, snake-like look and attitude.

In fact, there really wasn’t a weak acting link in The Wolverine, and overall, it was a big improvement over X-Men Origins and a very good movie in its own right.

But at the end it aaaall fell apart.

The movie’s whole vibe does a complete 180 when that Transformers reject CGI Robo-Samurai shown in the trailers shows up and the whole flick goes into full-blown summer blockbuster mode. But it wasn’t JUST Robo-Samurai that screws things up…it was also the “you’ll see it coming from a mile away” twist he represented

and all the garbage that went along with it. Basically, the whole ending was flawed from the concept level up and badly needed to be rewritten.

I also saw a screening of the 3D version,

and I have never seen a 3D film where the 3D effect was so completely and totally unnoticeable ever before. Aside from a power wire on a house in one shot looking ever so SLIGHTLY 3D-ish (that’s how bad it was…a WIRE stood out), this was a just a blurry movie made clear with funny glasses, nothing more. An even bigger rip-off than most 3D movies are. It’s borderline fraud calling this a 3D movie, in my opinion, as the 3D effect just doesn’t exist in The Wolverine.

But aside from the ending and the not-3D, I really enjoyed The Wolverine. But that ending is BAD…it doesn’t quite ruin the whole movie, but it comes close. But the film nonetheless is a must-see for fans of the character and comic book movies overall, and it also does a good job of setting up the next installment of the X-Men series, entitled Days of Future Past with a mid-credits sequence worth waiting around for. Check it out.