(Long Island, N.Y.) I’m telling ya…they don’t make ’em like this anymore. A slow-paced, atmospheric, genuinely creepy horror movie with sparse dialogue and an actual sense of restraint? The Woman in Black is all those things and more, my friends.

This film is also significant in that it’s Daniel Radcliffe’s first starring role since he recently finished tearing things up in the Harry Potter series. So that, coupled with its PG-13 rating, ensured that I’d be surrounded in the movie theater by little kiddies desperate to see their hero and/or heartthrob in action once again. Thankfully, they managed to remain quiet throughout…except when things got scary.

Then they were screaming…and rightfully so.

The Woman in Black, made by the recently-reformed Hammer Film Productions, isn’t original at all; in fact, it contains every staple that comprised Hammer’s bread-and-butter during their heyday of the 50’s and 60’s. A period piece set during the Edwardian era, we have rain, fog, creepy mansions, villages filled with suspicious and superstitious townsfolk, and a tragic hero determined to trek through the midnight mist (or some mud) to solve a great mystery. Heck, if Hammer had made this movie 50 years ago, Radcliffe’s part would probably be played by THE MAN himself, Peter Cushing.

Our film’s plot involves a young lawyer named Arthur Kipps (Radcliffe), who seriously has a sad after his wife dies during childbirth. As a result, Kipps starts screwing up at the office and chafing at the prospect of being a single dad to his son. Facing the chopping block at work unless he picks up his game, Kipps leaves his son with a nanny and takes a special assignment, heading out to the country to handle the estate of a deceased woman named Alice Drablow. 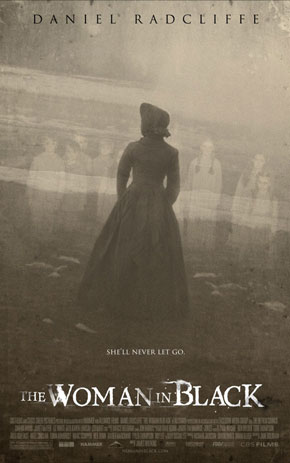 Of course, when Kipps gets to town, he’s greeted by oddball villagers who like to peep through their windows at the new stranger in town. The only resident who doesn’t give him the evil eye (or just plain threaten him outright) is Sam Daily (Ciarán Hinds), a wealthy landowner who offers to give him a lift to Drablow estate so that Kipps can go through the mountains of paperwork awaiting him.

However, things get even more uncomfortable when he gets to the Drablow estate; all sorts of supernatural tomfoolery starts happening, including sightings of what appear to be ghosts, as well as a mysterious and freaky woman dressed all in black. At the film progresses, Kipps discovers the tragic secrets the town is desperately trying to keep buried, as well as the motivations behind the seemingly malevolent actions of the ghosts inhabiting the Drablow estate as well as the sinister woman in black. Realizing the only way to save

the day, Kipps sets out to calm the turbulent souls inhabiting the mansion, but will he be willing to pay the horrific price to do so?

If Daniel Radcliffe was worried about being typecast as a boy wizard his entire career, I think he can lay those fears to rest now. I mean, Harry Potter is a super-iconic character, but I just watched Radcliffe in an hour-and-a-half horror flick and I totally bought it. In fact, I never once looked at the screen and thought to myself, hey, it’s Harry friggin’ Potter! Of course, part of it is the fact that Radcliffe looks older now, but it’s also the choice of role and, quite frankly, his talent as an actor. It seems that he’ll be going the Sean Connery/Harrison Ford route of avoiding being forever associated with their famous early roles, unlike other Potter alumni who are probably doomed to Mark Hamill-like degrees of notoriety. Still, I’m sure there’s an army of Potter freaks out there who will refuse to ever let Radcliffe go.

As stated before, the film is hardly original (the woman in black herself reminds me a lot of the creepy old lady demon thingy from James Wan’s Insidious), but what it does within the confines of the horror movie context, it does to near perfection. Sure, most of the characters are clichés, and there are several really cheap, fake scares. Also, there’s the fact that Radcliffe’s character just continues to nonchalantly hang out when things REALLY start getting weird (instead of soiling himself and sprinting for the hills), which is kind of hard to swallow…but it all falls in line with the classic Hammer Films hero and the general stoic attitudes of the people in that era, so that’s easily forgivable.

Plus, The Woman in Black is full of all sorts of super-effective little touches that only serve to heighten the fear you experience. The Drablow estate is situated on a small island and the lone access road is flooded over every evening at high tide, cutting it

off from the mainland; that alone is a

pretty masterful plot device. Also, there’s a slow, gradual buildup to an incredible scene of sustained terror where Radcliffe’s character is besieged by all manner of craziness which completely drew the audience in, and before I knew it, they

were screaming their heads off; that’s how genuinely scared they were.

So, you like horror movies, but hate modern horror films? Then The Woman in Black is for you. Don’t consider yourself a horror fan? This might be the film that converts you. Check it out.