(Long Island, N.Y.) Ah, it”s been far too long since we’ve had a solid little espionage film thrown our way, and now we have a very good one in the form of Tinker Tailor Soldier Spy, a British production based on a 1974 novel by John le Carré. Now, I”m not sure how widespread the advertising will be for this one, so to make sure it won”t slip under your radar when it opens this weekend, I”m going to go against my usual protocol and give my final word on this film in my review”s first paragraph instead of its last: It”s good. Go see it.

Ok, now that we”re through with that, let’s talk about why

Tinker Tailor Soldier Spy is such a good movie. One, it”s the source material, and director Tomas Alfredson”s treatment of it. John le Carré”s novel is very long, dense, complicated, and riddled with spy lingo…by all accounts, it”s pretty hard to follow, and a direct film adaptation of it would be nigh-impossible unless the movie was something like 7 hours long. Wisely, Alfredson stripped the story down a bit, and while the resulting film is still very complex, the pace flows faster than in the book, finding a delicate balance between brains and brawn. One could argue that moviegoers who have not read the book might still finds themselves a tad lost here and there, but I doubt that would significantly sully the experience for anyone.

Okay, let”s get to the next reason why Tinker Tailor Soldier Spy is so enjoyable…the cast. Take a look at who you”ll be gawking at on the screen this weekend: Gary Oldman, Colin Firth, Tom Hardy, John Hurt, Toby Jones, Mark Strong…the list goes on. Now, for some of my slower readers, yes, these are mostly accomplished British actors and no, none of the Jersey Shore cast shows up, but if you”re interested in amazing actors plying their craft to the utmost degree, then this is the movie for you. 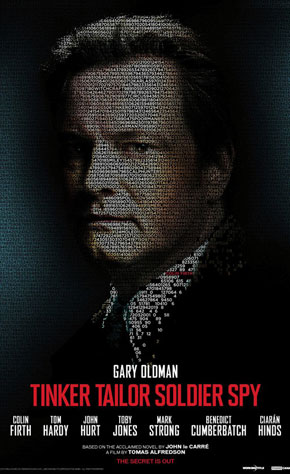 You know, I suddenly realized that I”m kind of doing my review in total reverse this week. Usually, I start with an intro, then the plot recap, then details about the movie, then my wrap-up. Not this time, and honestly, it”s kind of refreshing. I might have to do this more often!

Anyway, back to the movie… it’s plot time! Gary Oldman brings his intensity and intelligence to the role of George Smiley, the right-hand man of the head of British Intelligence, a man who is known only as “Control.” After a botched operation involving Soviet agents that causes an international incident, both “Control” and Smiley are basically kicked out of the service and into early retirement.

However, Smiley is brought back to investigate a claim that there was a Soviet spy within the British Intelligence agency, which leads to all manner of cloak and dagger shenanigans where friends are enemies, enemies are friends, and before you know it, if you take even one bathroom or popcorn break, you’re hopelessly lost amid a sea of pure espionage. It’s very engaging stuff, crafting a tale involving myriad twists and turns in a dark, gritty, realistic, character-driven tale the likes of which only the British can truly muster.

It’s a shame that films of this ilk don’t come around all that often…ever since the Cold War ended; it seems that the heyday of the spy thriller went with it. But every now and then, a movie such as Tinker Tailor Soldier Spy comes along and reminds us of why the Soviets were only second to the Nazis when it came to big, scary boogeymen in film. Again, to echo my opening paragraph…Tinker Tailor Soldier Spy already has my vote as sleeper hit of the year. Please don”t let this one pass you by…do your part to kick the latest Twilight movie out of the box office”s top spot and see this instead. There are no sparkly emo vampires, but there IS Gary Oldman, who is far, far cooler. Trust me, kids.