(Long Island, N.Y.) Hollywood’s obsession with corporately-mandated, money-grubbing Office 2013 nøglen remakes hit a new low when it was announced that Total Recall, the brilliant action/sci-fi flick directed by insane Dutchman Paul Verhoeven and starring the mighty Austrian Oak himself, Arnold Schwarzenegger, was due to receive the soulless modern recycling treatment. I knew right away that no good would come of it.

Total Recall was (loosely) based on writer Philip K. Dick’s story “We Can Remember It For You Wholesale.” Intense, action-packed, cheesy (in a fun way), funny, and featuring groundbreaking physical effects work by industry legend Rob Bottin, it was big hit when it was originally released back in 1990 and has gone on to achieve  SharePoint Server nøglen an everlasting footprint in popular culture.

What made the news of a remake especially infuriating for me personally is the fact that the film was pretty much perfect the first time around. Now, I’m not against the idea of a remake if there’s something new to bring to the table, thematically speaking, or if new technology exists that can complete the vision that the original was unable to achieve back in the day, but remaking Total Recall? With an actor that ISN’T Arnold? I can’t think of anything more pointless.

And never mind the fact that the original was ONLY released 22 years ago. I mean, come on.

Anyway, here’s our plot: the Earth has gone kablooey via chemical warfare, and only two places can currently support life: England (where the high-class citizens live) and Australia (where all the scrubs who do the dirty work live). Douglas Quaid (Colin Farrell) is one of the Australian scrubs who travels to England every day via a tube that extends through the planet called “The Fall” to work a crummy job assembling Stormtrooper robots. Frustrated and bored with his life, Quaid hits up a company called Rekall, which specializes in implanting realistic yet false memories of your fantasies into your noggin. While in the middle of having a “secret agent” program implanted, Quaid is suddenly besieged by soldiers and robot commandos and finds himself on the run; his Rekall memories seemingly come to life. It turns out that Quaid’s memory has been erased, and everyone wants to get their hands on him before he remembers who he really is. 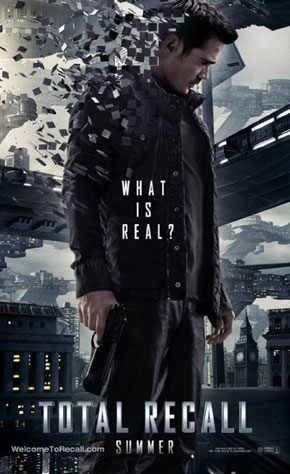 Much like in the original, there are two women in Quaid’s life- his wife, Lori (Kate Beckinsale), who is revealed to be an undercover agent now tasked with capturing him (although she’d much rather kill him instead), and the mysterious Melina (Jessica Biel), a member of an underground resistance movement that he only remembers from his dreams.

While on the run, Quaid finds himself at the center of a plot hatched by the dastardly Chancellor Vilos Cohaagen (Bryan Cranston) to conquer and eliminate the population of Australia so that England can expand. But as Quaid pieces together the puzzle of his own identity, will

he be the resistance’s

I went into Total Recall totally prepared to hate on it massively. But imagine my surprise when I discovered that the movie, directed by Len Wiseman (known for the pretty yet vapid Underworld movies), actually ISN’T horrible. It’s soulless, humorless, bloodless (gotta love that PG-13 rating), and clearly values flash and style over any shred of substance, but it’s NOT horrible. By modern action movies standards it’s rather limp, yet fast-paced and, at times, even somewhat entertaining. Forgettable and run-of-the-mill, of course; yet also inoffensive and perhaps even a little fun in a certain base manner.

Please bear in mind, however, that the fact that my expectations had previously taken a long trip down the assorted pipes and tubes leading from my toilet to the local sewer may have helped with my (very) mild enjoyment of the film. Just thought I’d share that.

Visually, Total Recall is a beauty; there’s CG galore and it all looks pretty damn good. But aside from that, the design aesthetic of the future presented here is impressive and eye-catching, combining Eastern and Western influences in a complex, inventive, and appealing way. It’s hardly original (Blade Runner says omghi2u), but it’s done well, and it gives the film a dark, gritty visual hook that the 1990 version didn’t really have.

Recall fails is when it’s trying to directly ape the 1990 version. Now, as beloved as Arnold Schwarzenegger is, no one’s ever accused him of being a master thespian; no, his talents obviously lay in the swift and brutal killings of hundreds of enemies instead of emitting viable emotion. However, I have to say that, when it comes to establishing Douglas Quaid’s disappointment in the mundane life he’s made for himself to the degree that he decides to engage the series of Rekall, Arnold actually OUTDOES Colin Farrell. With Farrell, you never really get the vibe that he’s ever that upset. Don’t get me wrong- the movie shows him whining about his life, slaving away in a factory, getting passed up for a promotion, but at no point does he ever seem

genuinely distraught about it like Arnold was. It’s weird, since both films hinged on that aspect of Quaid’s life being conveyed to the audience.

Likewise, other scenes that recall (haha) the original tend to fall flat. They try once to play with the idea that Quaid’s actually dreaming everything, sending in his friend Harry (Bokeem Woodbine) as a memory “implant” to try and convince him that his reality is false. But aside from the fact that the scenes plays out with zero tension, if nothing Quaid is seeing is real, why is Harry wearing a bulletproof vest? It’s little things like that that make Total Recall not work as a whole- when it’s struggling to maintain the link to the original film, the remake falters and comes across as clumsy; when it tries to do its own thing, it’s mostly bland and forgettable, with little hints of fun peppered about.

The acting is what it is. Colin Farrell is good at looking confused, jumping around, and falling hundreds of feet without getting hurt. But not much else. Kate Beckinsale was actually amusing as a relentless bad-ass assassin, and Biel…looked good, I guess? Let’s just say that everyone’s passable and leave it at that.

Oh, and I will also say that the villain, Cohaagen (Bryan Cranston), doesn’t hold a candle to the great Ronnie Cox, who originated the role back in 1990. There’s no “I’ll be back home in time for corn flakes” line in the remake either, which is unforgivable.

So, Total Recall is a pointless remake of a vastly-superior film when compared to the original, and just a pretty yet ‘eh’ action flick to the one or two people who

didn’t see the Arnold movie. Its okay, but I’d recommend skipping it and renting the original instead. You’ll have more fun.