(Long Island, N. Y.) Yawn…World War Z. Yeah, okay. I guess I’ll write about it. It’s based on the 2006 novel of the same name by Max Brooks, the same guy who wrote the tongue-in-cheek (at least, I THINK it was supposed to be tongue-in-cheek) Zombie Survival Guide. I remember skimming through that book at Barnes and Noble and thinking it was amusing; I know that Brooks’ follow-up, World War Z, has a lot of fans, although I never skimmed through that one at the book store. But, after talking to those who had, it sounded somewhat interesting, but ultimately it just wasn’t my thing; for me, zombies are a far more effective cinematic tool than a literary one.

Nonetheless, I knew trouble was brewin’ when the powers that be announced a film adaptation of Z, simply because what little I had heard about the book led me to believe that it basically read like a United Nations Tactical Report as opposed to a cohesive, dramatic narrative; clearly, the producers of the movie were going to go off in a different direction (I guess they had to?), and I knew it would be the usual Hollywood manufactured, cliché-ridden, big-budget, star-studded, CG-laden direction. Guess what? It was!

Brad Pitt plays Gerry Lane, a retired United Nations employee traveling the globe to try and find a way to stop a zombie pandemic. And before you

ask, these are “fast” zombies. If you’re not sure what I mean, let me school you- in zombie movies, there are two archtypes: the “George Romero” zombie (slow and shambling) and the “Zach Snyder” zombie (fast and agile). The zombies of

World War Z fall into the latter camp, for your information; these guys are fast. Real fast. The movie starts out with them running around, biting everyone they can get their hands on; those bitten become zombies themselves, and the cycle continues ad infinitum.

However, World War Z is a PG-13 movie, which means we don’t get cool, flesh-eating zombies…the zombies in this movie are more akin to a virus. In other words, they don’t want to eat you; they just want to spread whatever it is that’s turning everyone into zombies. Bite, and move on. Bite, and move on. It’s the only way Hollywood could realistically create a zombie movie that could bring in the kiddie money, I’m afraid, and while it kinda, sorta works, it’s also kinda, sorta lame. 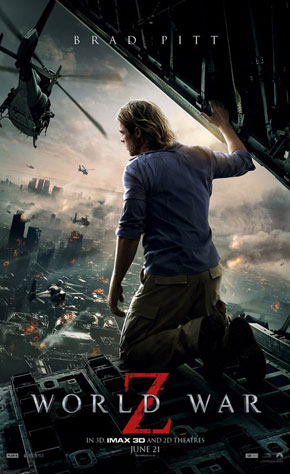 Anyway, Pitt’s character is brought in because, as usual, he’s the only man who can uncover the outbreak’s source due to his expertise and experience, but of course he does so reluctantly, blah, blah, blah. And while Pitt is running around, his golden locks flowing in the breeze while engaging in endless chase scenes and close calls, we’re treated to a rather unimpressive video-game involving waves and waves of rather poorly-rendered and animated zombies climbing all over each other to get at the dwindling human survivors, many of whom have walled themselves up in massive “safe zones.” And the entire time, we’re left desperately trying to find a reason we shouldn’t be rooting for the undead in this movie, most of whom have far more personality than the human beings.

World War Z had a well-publicized, troubled production, and it really shows. The film is all spectacle and no soul or heart, and often finds itself more concerned with showing landscapes filled with ravenous, crazed, computer-generated zombies running amok than instilling its characters with any interesting qualities. It’s also disjointed, especially when it comes to its ending sequence; word on the street is that the studio insisted on a massive last-second re-shoot to make the climax more “summer blockbuster” friendly. I can only assume that the filmmakers actually went a little too dark for a studio-mandated family-friendly horror/action flick? Who knows, but the result is rather jarring; the flow of buildup to the ending is obviously thrown out of the window in favor of something glaringly awkward. But hey, gotta have that

Granted, the spectacle on display can be fun at times, in a totally mindless way; but, in the end, World War Z is as brainless as its undead antagonists. I’d say it was a shame, but there are so damn many well-made zombie movies out there to choose from these days that a few crappy ones like this don’t really matter much in the grand scheme of things.

Pass unless you dress up as a zombie every Halloween.