(Long Island, N.Y.) Honestly, when reviewing Wrath of the Titans, the sequel of Clash of the Titans, I could have gone back to my review of the 2010 original (itself a remake of classic the 80’s film) and simply cut and pasted the text into this very spot. And, with very few alterations, that review would be pretty much spot-on as far as how I feel about this movie as well.

However, posting my old review wouldn’t get me paid for this one, so believe me, I will indeed write some original text on Wrath of the Titans today. But, just to get it out of the way, I WILL reprint one blurb from my Clash review that pretty much sums up my overall experience with its sequel: “The Clash of the Titans remake is a decent way to kill time, but not much more. If you’re just looking for some action, it’s a good bet, but just be prepared for a film that doesn’t surprise you or involve you on any emotional level at all. You’ll most likely watch it, leave the theater, and not spend another thought on it as long as you live.”

Yeah, that’s pretty much how I feel about the sequel.

To recap things, Wrath of the Titans continues the saga of Demi-God Perseus (Sam Worthington), the son of Greek God Zeus (Liam Neeson, who is a god in real life…well, at least to me, he is) and a mortal woman who, after his epic quest to defeat the monstrous Kraken ten years earlier, now lives the life of a humble fisherman with his wife and son in some crappy seaside village. One day Zeus pops by for a visit and tells Perseus that the powers of the gods are fading because mankind is growing beyond the need for them. However, the bad part of this is that because their powers are fading, the walls of the underworld prison of Tartarus are crumbling and soon all sorts of crazy monsters will be running around free on Earth. Zeus asks Perseus to gather the world’s armies to help, Perseus doesn’t care, the end. 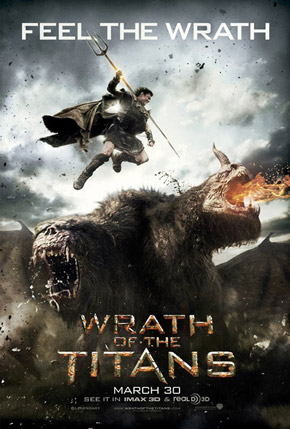 Well, not quite the end. Zeus’ evil brother Hades (Ralph Fiennes) and his son Ares (Edgar Ramirez) team up and imprison Zeus, stealing his mighty thunderbolt so they can revive their evil father Kronos in exchange for ensuring their immortality.

Then, as Zeus warned, Tartarus breaks, monsters attack the mortal world, and Perseus goes on a quest to rid the world of the terror unleashed upon it, free Zeus, and defeat evil once and for all.

Honestly, all that back story may sound impressive (or not, your mileage may vary), but in reality, it took up maybe a total combined film-time of maybe five minutes. Wrath of the Titans isn’t about plot or character; it’s about bad actors fighting pretty computer-generated monsters for about an hour-and-a-half.

Now, when I say “bad actors,” please note that I am NOT talking about Liam Neeson. No, he’s great as always, even in paycheck roles like these. Ralph Fiennes is certainly a fine actor as well. Heck, even John Bell, the kid that plays Perseus’ son Helius is pretty much okay. No, no, boys and girls…I am actually referring to one Mr. Sam Worthington. You know, the leading man and top-billed actor of this affair.

In fact, I can say with great certainly that if not for the existence of Channing Tatum, Sam Worthington would most likely be considered this generation’s most wooden actor. By far. His being shoehorned into leading man status by studios is just something I will never understand, and to date, he has lowered the quality of pretty much every movie I’ve seen him in just by his very presence…then he opens his mouth, and it gets worse.

Otherwise, Wrath of the Titans features plenty of fast-paced action scenes with plenty of wacky Greek mythological creatures killing and being killed by Perseus and his cohorts. Even in this era of overblown computer effects, some of the visuals on display here are pretty impressive, as is the action itself. But then it all comes back to the lack of development of anything resembling a solid story or characters that you care about, and as a result, it’s as engaging as sitting there and watching while someone else play God of War on your Playstation 3. It’s cool, but not very engaging.

Actually, that’s the perfect closing statement about Wrath of the Titans, for all you folks who like to skip to the end of reviews for the wrap-up: It’s cool, but not very engaging. Now go back up and read the rest of my review!