(Long Island, N.Y.) Young Adult has a small amount of significance to me, but not because it’s made by the duo of writer/ex-stripper Diablo Cody and director Jason Reitman (who made 2007’s Juno, a film I never saw), or the fact that it stars Oscar-winning actress Charlize Theron as a drunken floozy.

No, you see, several scenes of Young Adult were actually filmed in Massapequa Park, which I live maybe 2 minutes from. They filmed on a street called Park Boulevard in a bar called Woody’s. Of note was the fact that Woody’s used to have cartoon character Woody Woodpecker on their front sign, something that was changed to what looks like a drunken cowboy behind swinging saloon doors to avoid any copyright issues.

I covered the filming last year for a local paper I work for. No, they didn’t let me near any of the stars or the director, but I did interview the studio’s PR lady, who was very nice, explaining why they picked Woody’s out of a billion similar dumps on Long Island. Also, the film crew had all sorts of curtains and hoses and wires and vents set up on Woody’s sidewalk and going into the bar, which I took many exciting pictures of.

Well, a year later, I’m finally watching Young Adult, and the scenes filmed in Massapequa Park amounted to maybe five minutes of screen time, tops. I did get some inner amusement as I watched Charlize walking down Park Boulevard past joints like Thai Taste, and there was a quick scene in the rear parking lot where I saw the fire department and village hall in the background, but honestly, it wasn’t that exciting. Oh, and neither was Young Adult.

It’s a story about Mavis Gary (Theron), a divorced woman pushing middle age who, out of nowhere, starts yearning for the dude she dated in high school, who is currently happily married with a baby. Despite this, Mavis is convinced that she can get him back, and accepts an invitation he sent to her to attend his baby shower (or something baby-related, I forget) back in their old hometown (who invites their high school girlfriends to things like that?). Mavis, a ghostwriter for a failing young adult book series, is also a raging alcoholic barfly with very questionable morals, and as played by Theron, is basically a clone of Cameron Diaz’s Bad Teacher character. 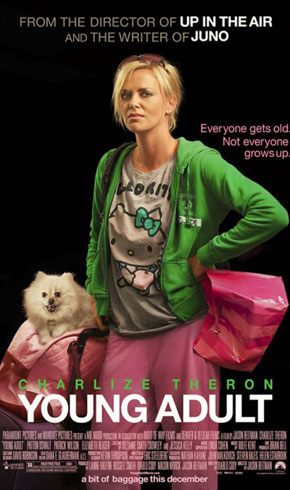 So Mavis heads home and starts putting the moves on the ex, who all but blows her off every chance he gets. She also re-connects with a former classmate named Matt (Patton Oswalt), who was a nerd in high school who was beaten and left for dead by the football team because they thought he was gay, and was left crippled for life, both emotionally and physically. Not very nice, I must say.

So, does Mavis destroy a perfectly happy marriage? Does she drink herself to death? Does she let her cute little poochie starve to death in her hotel room? If you really must know the answers to those questions and more, and I suppose you should go see Young Adult. Honestly, though, you’ll live not knowing the answers, trust me.

Is Young Adult a comedy? A drama? A tragedy? How about all and none of the above? Seriously, that’s the problem with this movie…it doesn’t know what it wants to be. It’s billed as a comedy, but it’s not really that funny, and its dramatic elements are undercut by the fact that it doesn’t take itself seriously enough. For example, there’s a scene where Matt is talking about the ways he’s handicapped in the… um, let’s just say “the bedroom” and I couldn’t tell if the scene was supposed to be sad or if they were playing it for laughs. As a result, the scene completely failed on both levels.

Honestly, Young Adult is a tad on the boring side, but the performance of Theron is strong enough (despite ripping off Cameron Diaz as stated earlier) that I somehow managed to stay semi-interested until the end. Her chemistry with Patton Oswalt is a high point as well.

Oh, and J.K. Simmons apparently has a cameo as Mavis’ boss, but you only ever hear him on the phone, so I didn’t even know it was him until I saw the credits online when I got home.

So, Young Adult is just okay at the very best. Stripped of its five minutes of Massapequa Park-ness, it’s an odd, confused little film that doesn’t quite know what it wants to be, and that lack of focus took a film that could have been both a great drama and a great comedy (a…dromedy?) and reduced it to mere ‘eh’ status. A shame, really.