(Long Island, NY) After giving such a glowing review to Blood Diamond in my very first article written for Long Island Exchange last week, I began to wonder when I’d have the dubious honor of writing my first negative movie review. Then last night my movie-going cohorts and I went to see the new action movie Smokin’ Aces. Well, it didn’t take long for that first negative review.

Smokin’ Aces is an ensemble film of sorts- it contains a who’s who of A and B-list actors, but mostly B actors, or actors who used to be A at one point but then slipped to B. The cast is headed up by Ryan Reynolds and the always great Ray Liotta as FBI agents Messner and Carruthers, respectively. The duo start the movie by staking out the home of elderly Mob boss Primo Sparazza (Primo Sparazza? Is he a man or a pizza parlor?).

They overhear the dying crime lord (via telephone wire tap) order a $1,000,000 hit on his former protégé, Buddy “Aces” Israel (Jeremy Piven). Buddy’s a Vegas magician turned gangster who can throw playing cards like Gambit from the X-Men comics, and, well…that’s about it. Oh, and he does lots of coke and hookers too. He’s a guy on the edge, as they say. 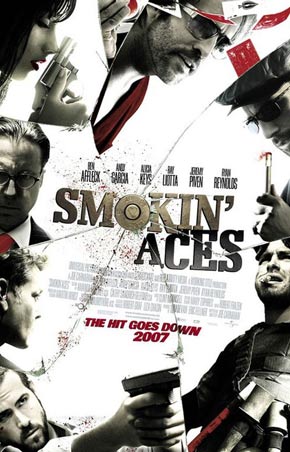 So Buddy’s not really a likeable guy, but the FBI wants him in protective custody since he’s agreed to testify against Sparazza and his criminal organization. Messner and Carruthers are dispatched to Las Vegas to retrieve Buddy from his hideout, but at the same time the million dollar hit brings out a rouge’s gallery of the most brainless and incompetent assassins ever caught on film. I found it amusing that everyone was so excited over a $1,000,000 murder contract, since Christopher Lee was getting a million dollars a hit in that one James Bond movie and that was way back in 1974. But I digress.

As for the movie itself, the first thought that comes to mind is how much I hate blatantly false advertising. The commercials make this look like an intense, action-packed, non-stop thrill ride. But in reality, what we actually get is a somewhat plodding, slow-paced movie filled with sporadic action scenes and soulless characters that you are never given a reason care about. There’s also a “twist” at the end that’s treated as a big deal but you won’t care about that, either. The acting is solid but unremarkable, and the movie as a whole isn’t bad per se, merely very forgettable.

I can’t really blame the discrepancy between the advertising and the actual movie on the commercials, however, since they merely did the job any commercial is supposed to do- make its subject matter look as appealing as possible. It’s still annoying, however, because those vile marketing people do this all the time- I can’t count the number of crummy movies I’ve seen that have had awesome trailers.

It’s a shame, really. Smokin’ Aces had a lot of potential, but in the end it winds up a disappointment.

(Long Island, N.Y.) A lot of people have been talking about this movie, which released nationwide on December 8th. Our fellow movie going friend informed us that his father had seen it and told him that we would be “crazy” if we didn’t do the same. So, not wishing to sully our reps, we got down to our local theater last night and checked out Blood Diamond starring the always-talented Leonardo Dicaprio. And what we got was probably the first movie I would actually categorize as “good” after what seems like months and months of wading through a cinematic sewer of new releases.

1990’s, Sierra Leone, West Africa- the country is in the throws of a civil war initiated by a bunch of mean guys called the Revolutionary United Front (RUF). To fund their war efforts, the RUF doesn’t hold bake sales, but instead raids local villages and enslaves those they do not kill or maim to mine blood diamonds (also called conflict diamonds), which are then sold on the open market illegally (as if diamonds haven’t already caused enough problems- ask the guy you know who just shelled out 5 grand for one). In addition, children are “recruited” into the rebel army and essentially brainwashed into becoming the next generation of heartless killing machines, and the scenes where these kids gun down people in cold blood with AK-47s are pretty disturbing.

During one such raid on a fishing village, a family is separated- while the mother and daughters manage to escape, the father, Solomon (Djimon Hounsou), is enslaved and his son is forced to join the RUF. A surprise attack on the rebel mine by government troops gives Solomon the chance he needs to escape- but not before hiding a huge diamond that he pilfered while digging. In his quest to re-unite his family and retrieve the diamond, Solomon is aided by an unlikely ally- no, not Batman, but ex-military soldier gone diamond smuggler named Danny Archer, played by Dicaprio. At first Archer only selfishly uses Solomon to get the diamond, but in time the two form a bond and Archer’s tough-guy exterior finally melts enough for his heart to be touched by the plight of Solomon’s family. With the aid of an American reporter (Jennifer Connelly), Archer kills hundreds of people, rights the wrongs, punishes the guilty, and cures AIDS (well, maybe not that last one). 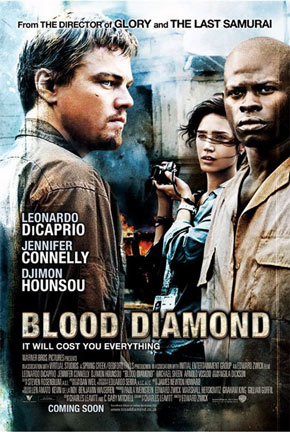 The movie features strong performances all around, but the real gem in this movie is not the diamond, but Leonardo Dicaprio’s character. Dicaprio stands out with a flawless fake African accent, in addition to playing a bad-ass so convincingly that you forget about the actor and totally buy into the character he’s portraying. While I’d never be one to question his amazing acting abilities, before this movie no one on Earth would have ever taken Leo seriously as a tough guy, what with his stick-figure physique and boyish looks. However, he’s finally filled out and aged enough that he can now pull off a one-man army on-screen the likes of which has not been seen since Arnold Schwarzenegger effortlessly slaughtered the entire population of a terrorist island in his classic tour-de-force “Commando”. My opinion: a Best Actor Oscar nomination for Dicaprio, if not an outright win.

The violence is pretty graphic, especially when it pertains to the atrocities that the RUF committed on the villagers of Sierra Leone, but it’s not like the screen writers were making that stuff up- it all really happened. Much like another current movie, The Last King of Scotland, the makers of Blood Diamond have taken a real, bloody, tragic period in history and set a fictional story to it in order to inform and entertain. However, the makers of Blood Diamond do a far better job of balancing fact and fiction and manage to make a film that is both touching, engrossing, and exciting, to the point that its running time of 2 ½ hours is a plus instead of ruining what could have been a great movie like so many other clods do in Hollywood.

Anyway, great movie. Go see it. You’ll be entertained and maybe even learn something, which you can’t say about 90% of the garbage released nowadays.